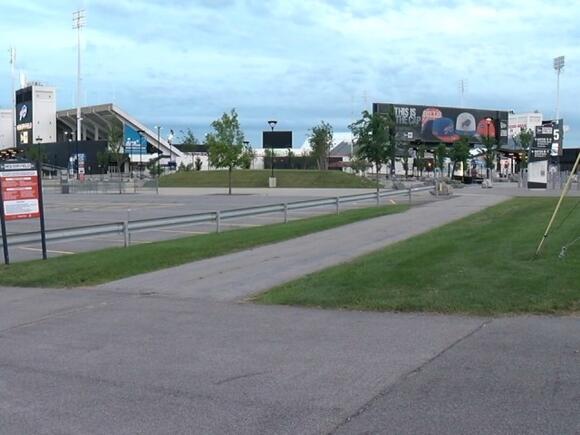 Erie county says there's no agreement on the table to build a new Buffalo Bills stadium.

“While we have met and discussed issues with the stadium — there's no agreement — I want people to understand that,” declared Mark Poloncarz, Erie County Executive.

Poloncarz says lease negotiations between the state, county and Buffalo Bills is underway, but disputes a report that there is an agreement to build a new stadium on Abbott Road near the current stadium in Orchard Park.

Reaction comes after word surfaced Friday that the Buffalo Bills and Pegula Sports and Entertainment hired a consultant to explore options for a possible new stadium.

“So, I just want the public to understand — that while the Pegula's may be preparing as they are for the discussions and hiring counsel — we hired counsel to assist us, but there is no agreement to build a new stadium and when there is an agreement we will talk about it,” Poloncarz said.

An article by Venues sparked speculation of a new stadium.

Pegula Sports and Entertainment has hired legends global sales to sell premium seats and sponsorship for what it described as a new venue for the Buffalo Bills and to study construction of a new stadium.

The current stadium lease expires in 2023.

Built in 1973, the stadium has undergone upgrades — a cost that is shared by the county, the state and bills. Improvements made several years ago cost $130-million.

But paying for a new stadium could cost a billion or more.

“What we've been seeing in recent years is that NFL stadiums are running a billion and upward,” remarked Andrew Zimbalist, economic professor, Smith College, Massachusetts.

He points to the $5-billion costs of the SoFi stadium in Los Angeles, home to the L.A. Rams.

But it includes an entertainment center and was built with private dollars and tax incentives.

“And frankly the news is still more depressing for Buffalo because those host cities that tend to have a smaller population and a smaller footprint to the large corporation, they don't have as much bargaining power as the larger cities do and they owners know that and take advantage of that,” Zimbalist.

And that means in the smaller cities, life Buffalo — it relies on taxpayer contribution to help pay for it.

The county executive would not discuss any details, only saying it will be some time before a stadium deal is announced.

But Poloncarz says he can reassure bills fans that he expects the team will be in Buffalo for a very long time.

“I feel very confident the bills will be the Buffalo Bills for as long as I’m alive — I feel confident in that situation,” said Poloncarz.

A spokesman for the Buffalo Bills say the organization is not commenting on this topic at this point.

Letter: Pegulas should give Bills a domed stadium

As I listened to the news regarding the new stadium proposal, I could only think why are we making the same mistakes we did 50 years ago? Back then we had a chance for a domed stadium and what did we do? We put an open-air stadium in an area prone for snow. I can see the reasoning to keep the stadium in its present location since there have been significant investments in training and practice facilities. However, since Terry Pegula thinks football should be played in the elements maybe he should sit outside for one of those games in December and January.

ORCHARD PARK, N.Y. (WIVB) — Looking to work at the home of the Buffalo Bills? You’re in luck — Delaware North is trying to fill a variety of positions at Highmark Stadium for this upcoming Bills’ season. Delaware North provides food, beverage and retail services at Highmark. The company is...

Sports betting legalization is finally on deck in Massachusetts where it could generate an estimated $70 million in annual tax revenue and lawmakers teeing up amendments that would allow wagering inside stadiums. "Recently some of the sports teams have asked us about in-stadium betting, and it's something to look at,"...

For 20 years, the Bills held their training camp at St. John Fisher, the Division III college in the Rochester suburb of Pittsford. And, each summer, the team seemed to add a perk or two which enhanced the fan experience. Best of all, over half the practices were open to...

The Buffalo Bills are about to embark on what many hope is a run at a Super Bowl in 2021. The team finished 13-3 last season behind a breakthrough campaign for quarterback Josh Allen, on their way to the AFC Championship game. However, much of this offseason has centered around...

BUFFALO, N.Y. (WBEN) - Former Buffalo Bills quarterback Jim Kelly has a lot of memories of the current stadium in Orchard Park. The hall-of-fame quarterback set various passing records and became an icon during his 11 seasons in Buffalo where he led the Bills to four Super Bowl appearances. But...

If Bills training camp was at St. John Fisher College in 2021, fans would have a few weeks to see their team up close and personal. But that's not happening. So with camp in Orchard Park, the Bills are planning on holding 3 open practices at Highmark Stadium where fans can watch Josh Allen and company go to work. The team sent out an email to season ticket holders giving them an opportunity to secure the free tickets beginning on Thursday morning, July 15th. There is no indication yet on how many tickets will be available and when they will be offered to the general public. The 3 dates for the practices are July 28th, August 7th and September 1st.

BBR: What a weird week for Bills Mafia

Well Buffalo Bills fans, this week has certainly been….different. Please excuse me while I take a little bit of time in this podcast to vent with everyone for a bit. In light of the recent takes shared on Twitter, I feel many will agree with me that training camp can’t start soon enough for the Bills.

“I never imagined that I would be here for a ceremony where my name would be part of this great library,” noted Dr. Eva Doyle.

Jemal provides update on his properties throughout WNY

What’s going on with the Buffalo school speed zone cameras?. According to the Buffalo Common Council, the cameras were supposed to be turned off after the council voted to stop using the cameras, and the amendment was sent to the Mayor’s office in late May.

By the time you read this, the grass field at Bank of America Stadium—a consistent feature since the stadium opened in 1996—should be long gone. Carolina Panthers owner David Tepper and his organization, Tepper Sports & Entertainment, decided this spring to replace the natural surface with synthetic FieldTurf, which five other NFL stadiums use.

Lloyd, Planning Board at odds over new patio plans

For the last two years, Peter Cimino and Lloyd Products Inc have been in the process of turning the old Cecilia's restaurant on Elmwood Avenue into a new Lloyd location. Part of their transformation plans includes an outdoor patio.

According to members of the police advisory board committee for the Buffalo Common Council, Buffalo is the sixth most segregated city in the U.S. “We brought this issue together because the community wanted this issue brought up,” said Orlando Dixon, who is a member of the Buffalo Police Advisory Committee.