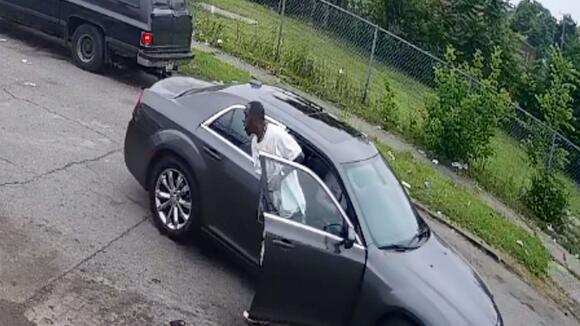 Three people, including an 11-year-old boy and his father, were sitting in a car when they were shot and injured in a violent triple shooting caught on video, Detroit police said.

The boy, his father and the third passenger, a 30-year-old man, were all hospitalized in stable condition after the Sunday morning shooting, police said.

The victims were parked and sitting in a Chevy Suburban when, at about 8 a.m., a black Chrysler 300 pulled up next to them and stopped, police said.

Police are looking for the Chrysler driver as well as the gunman.

JACKSON, Miss. (WLBT) - The U.S. Marshals Office says that they have now captured Dezmon Clinton, who was wanted for capital murder. The boy was taken into custody at a home in Jackson Wednesday afternoon without incident. He was then transported to the Jackson Police Department for processing on their...

EXCLUSIVE: The family of a young mother of newly born twins, who was shot and killed by her boyfriend, demand justice.

TEMPLE, Texas (KWTX) - Police released surveillance video Friday of a shooting in late June in the parking lot of a Temple nightclub that left three people injured. The shooting was reported at just after 2:30 p.m. on June 26 in the 1400 block of Martin Luther King Jr. Lane near Club Paradise.

The man arrested and charged in a triple homicide that happened earlier this month allegedly "bound the hands, legs, and mouth" of two men whose bodies were found in the back of a pickup truck, according to a criminal warrant.

Trial starts for man accused of cutting off mother’s head, caught on camera tossing her into carwash dumpster: Prosecutor

The murder trial for a Colorado man accused of killing his own mother and tossing her into a dumpster begins this week in Pueblo. As CrimeOnline previously reported, investigators released surveillance video of a man in October 2019 driving up to a dumpster at a South Side Pueblo car wash off of Ivywood Lane. The man then took a suitcase from his trunk and threw it in the dumpster.

A woman found dead inside a parked car in Lakeview in May was killed by her boyfriend after she confronted him about infidelity, prosecutors said Sunday. Police found 41-year-old Kendra Gardner’s body inside a gold Cadillac on the 3000 block of North Clifton after a passerby reported seeing an unresponsive person inside around 4 p.m. on May 26. CPD issued a missing person bulletin for Gardner earlier that day.

CHICAGO - A man allegedly fatally shot a woman and wounded two other men over the weekend in Austin before being shot by a concealed-carry holder, police said. Calvin Gonnigan, 34, is charged with one count of murder and two counts of attempted murder, as well as one count of aggravated assault with a firearm in the July 4 incident, Chicago police said.

He was found dead in 1963. Now this little boy finally has a name.

A toddler found dead in Oregon in the 1960s went decades without a name on his grave, becoming the oldest case of unidentified human remains in the state. Now, thanks to genetic genealogy, his name and story are finally known. The decomposed body was found by a fisherman on July...

‘I shot somebody near Douglass Park’: Woman walks into police station after allegedly shooting woman in Middletown

An 18-year-old woman is recovering in the hospital after she was shot in the back late Saturday while sitting in a car near a Middletown park, Middletown police said. Officers were called at about 11:40 p.m. to Kettering Health Middletown for a woman suffering from a gunshot wound, police said.

10-year-old played dead after her sister and parents were killed in SW Houston, family says

HOUSTON, Texas (KTRK) -- Three family members were shot to death in an apartment in southwest Houston overnight, and a brave 10-year-old girl got help after playing dead and calling her grandmother. Houston police responded to a shooting in the 12100 block of Fondren near West Airport just after 10:30...

A mother found a home in a Norfolk gang. Then they shot her in the face and left her for dead, prosecutors say.

NORFOLK — Shot in the face, stabbed in the head and nearly drowned with bleach, Brianna Arrington had been dying for about nine hours by the time someone found her. It had been a gang hit, and the 20-year-old mother was supposed to die early in the morning on April 24, 2020, prosecutors said. Presumably, her would-be killers thought they’d finished the job after shooting her in the right eye, sending a bullet into her skull and out her right ear.

Motorcyclist pulls gun in road-rage incident, gets shot dead by other driver

A road-rage incident in Texas turned deadly when a motorcyclist pulled a gun — only to be shot by the other driver in what authorities are treating as an act of self-defense, according to reports. The fatal chain of events unfolded last Friday on the I-35 highway in Fort Worth,...

HOUSTON – A man who used a machete to decapitate the owner of a Houston auto parts shop in 2016 was sentenced to life in prison, officials said Wednesday. Following a four-day trial, Raymond G. Jackson was convicted by a jury in less than an hour of murdering 58-year-old Enayatolah “Andy” Khorsand and sentenced by a judge.

An aspiring model was found shot dead inside a car in a Phoenix alley over the weekend — less than two days after her parents reported her missing, a report said. Itzel Espinoza, 17, was last seen by her family on Thursday night before she left to hang out with friends, her heartbroken father, Eduardo Espinoza, told AZFamily.com.

A concealed carry holder shot a gunman who police say opened fire at Fourth of July partygoers in the Chicago area over the weekend, killing a woman and injuring two others. The suspect, Calvin Gonnigan, 34, is in police custody. Police say he shot at a group in Austin around 10:45 p.m. Sunday, striking 45-year-old Janina Ford in the head. She was pronounced dead at the scene.

A 10-year-old Houston girl reportedly played dead, grabbed her toddler brother, locked a door and called for help after she was shot and injured during a triple homicide that claimed the lives of her parents and younger sister. The deadly attack inside the family’s apartment on Fondren Road in southwestern...

Philadelphia police say a man first attacked his ex-wife with a car then with bat.

Attempted Murder Caught on Camera, LAPD Searching For Man Suspected of Stabbing Another During Fight

A violent attack on Sunday outside a video store in Panorama City left a man in critical condition and police looking for the person responsible. The Los Angeles Police Department released video and still images Friday of an attempted murder caught on camera hoping the public can help identify an individual suspected of stabbing a man on June 20.