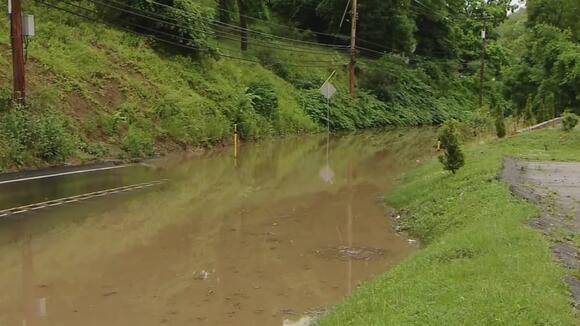 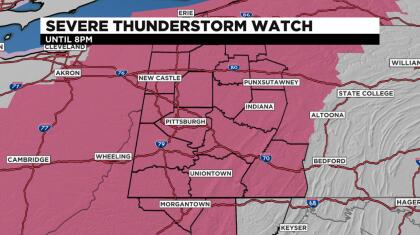 The stormy day had it all: rain, thunder and lightning, plus plenty of watches and warnings from the National Weather Service.

A tornado warning for parts of Allegheny and Butler counties and a second one later for Greene County have all been allowed to expire, as have all other severe warning warnings.

The greatest threat from Monday’s storms was damaging winds and flooding. High winds knocked down trees and power lines across the region.

The heavy rain caused flooding on many roads, including one in Shaler Township that will be closed through at least Tuesday morning.

Police closed Seavey Road between Elbe Drive and Soose Road and set up a detour due to the flooding.

A lightning strike is also believed to have caused a house fire in O’Hara Township. There is minimal structural damage as a result of the fire, but there is a lot of smoke and water damage.

The family of four is OK, but they won’t be able to get back into their home for a while

“When it all went down, it was very traumatic. We started to smell smoke. We were not sure what was going on,” said Hunter Skena. 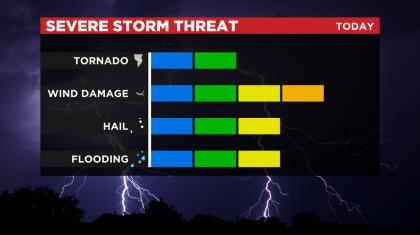 Much quieter weather will return after some early showers on Tuesday.

Stay up to date with the KDKA Weather app, which you can download here.

PITTSBURGH (KDKA) – Good morning, if you’ve been thinking that the past couple of days have been on the cool side you would be correct! Through the first three days of August, it’s been the coolest start to the month in a quarter-century. WEATHER LINKS: Current Conditions | School Delays & Closings | Local Radar | Weather App | Photos I have our average daily temperature coming in at 68.0°. 1996 was the last time (67.8°) we saw temperatures this cool to start the month. The first three days of this month are also in the top 20 coolest starts to August...

By: KDKA-TV News Staff INDIANA, Pa. (KDKA) – The National Weather Service says a brief EF0 tornado touched down in Indiana County last week. Crews were out surveying the damage after severe storms tore through the area. The NWS says the tornado happened on July 29. Photos from the scene show a damaged barn and a path carved through a field. Over the weekend a Damage Survey Team from our office found a brief EF0 tornado in Indiana County. Below are a few images from that survey. This damage happened on Thursday, July 29th. pic.twitter.com/8hZi6qfmQq — NWS Pittsburgh (@NWSPittsburgh) August 3, 2021 Over the weekend,...

PITTSBURGH (KDKA) — How nice was yesterday? Yesterday was supposed to be my relaxation day and it did start off that way. Then I heard my attic exhaust fan belt snap No real surprise since I had never changed in over the years living in my home. I was pleasantly surprised to find that it still felt amazing inside with the windows open. Today should be nearly as comfortable as yesterday. (Photo Credit: KDKA Weather Center) It is just so crazy to me that you can have temperatures near 80 degrees and be completely comfortable. It is once again a testament to the...

By: KDKA-TV News Staff PITTSBURGH (KDKA) – The HOV Lanes in Pittsburgh have fully reopened following what PennDOT has said was a technical issue. The lanes on the Parkway North were supposed to open at 6:00 a.m. to inbound traffic during the morning rush and then outbound traffic during the evening rush. Two or more people are required to be in your vehicle to use them, except after hours. Those lanes, once fully reopened, will be closed from 10:00 a.m. until 3:00 p.m. on weekdays in order for PennDOT to train and certify new staff for HOV operations.

PITTSBURGH (KDKA) – As coronavirus cases start to climb again, cities across the country are looking at new restrictions. “We encourage all of our team members to get vaccinated. We are vaccinated ourselves. In terms of our customers, we do require masks if you are unvaccinated. And it’s tough because you do have to go off the honor system,” said Catey Burget, owner of Live Fresh Juicery in Homestead. But two restaurants in Pittsburgh want more than the honor system. The owner wants facts. Michael Barnhouse owns Lola Bistro and Leo. a public house. He posted signs on social media and on...

PITTSBURGH (KDKA) – Multiple local counties now have “substantial” COVID-19 spread, according to the CDC. As of Tuesday night, the CDC had listed Allegheny, Beaver, Butler, Lawrence, Washington, Westmoreland, Indiana and Somerset as counties in our area with “substantial” community transmission. For it to reach “substantial,” a county needs at least 50 cases per every 100,000 people. Allegheny County is eight cases over that threshold at 58 cases. As cases creep up, things are ramping up inside Pittsburgh’s two largest hospital systems. Doctors say there’s one thing in common between almost all the patients: they’re unvaccinated. “We got as good as in the single...

PITTSBURGH (KDKA) — New concerns surrounding the COVID-19 pandemic are growing across Western Pennsylvania and Giant Eagle is taking action to help slow the spread of the virus. Giant Eagle announced Monday that its employees will again be required to wear masks, regardless of whether they’ve been vaccinated against COVID-19 or not. The company will also request customers start wearing masks inside stores again. “For our team members, it’s about protecting one another and protecting our guests,” said Giant Eagle Spokesperson Dan Donovan. In a statement, the company says it has noticed the increase in positive cases of COVID-19, and is bringing...

PITTSBURGH (KDKA) – After a week of traffic congestion and driver confusion in Sharpsburg, PennDOT is reopening a ramp to Highland Park Bridge. There’s been a change of plans; the ramp from northbound Freeport Road to Highland Park Bridge in Sharpsburg is re-opening Monday at 9 a.m. It’s re-opening to cars, truck traffic must continue to follow the detour. “It’s preventing future accidents,” said Mike Daniher, assistant chief of Sharpsburg Volunteer Fire Department. PennDOT closed the ramp a week ago and said it would be permanent, but the closure created a detour within a detour because of another ramp closure on Route 28. “Since...

By: KDKA-TV News Staff PITTSBURGH (KDKA) – Pittsburgh River Rescue, EMS, and police responded on Sunday morning to reports of a body floating in the Monogahela River. Just before 11:00 a.m., a caller made the report, and crews responded to the 300 block of Station Square Drive. Once there, the caller directed the crews to the location of the body. Crews extracted the body from the river and transported it via river rescue. The Allegheny County Medical Examiner identified the body as 27-year-old Michael Mason of Akron. The Medical Examiner did not specify the cause of death and police are investigating. Stay With KDKA.com For More Details