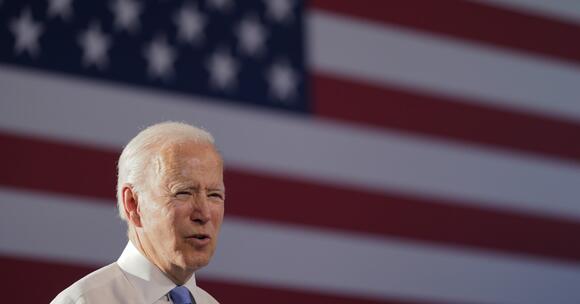 Ghani will be joined by Dr. Abdullah Abdullah, chairman of the High Council for National Reconciliation. The council, which met for the first time last December, is trying to rally the Afghan government and the Taliban around an almost impossible peace deal before American forces leave the country, ending the United States's longest war.

"The visit by President Ghani and Dr. Abdullah will highlight the enduring partnership between the United States and Afghanistan as the military drawdown continues," White House press secretary Jen Psaki said Sunday.

Biden is committed to providing diplomatic, economic, and humanitarian assistance, even after he pulls all remaining U.S. troops and equipment out of Afghanistan by Sept. 11, according to Psaki.

"The United States will remain deeply engaged with the government of Afghanistan to ensure the country never again becomes a safe haven for terrorist groups who pose a threat to the U.S. homeland," she said. "The United States continues to fully support the ongoing peace process and encourages all Afghan parties to participate meaningfully in negotiations to bring an end to the conflict."

But Ghani's predecessor, Hamid Karzai, ripped Biden and Washington's NATO partners over the weekend, contending that their joint effort in Afghanistan has been a "total disgrace and disaster."

"The international community came here 20 years ago with this clear objective of fighting extremism and bringing stability," he said in an interview. "But extremism is at the highest point today. So they have failed."

Yet while the Taliban regain ground in Afghanistan, Ghani insisted his country would "be better off without their military presence."

“I think we should defend our own country and look after our own lives," he said. "We don’t want to continue with this misery and indignity that we are facing."

Ghani's 13 years in leadership resulted in economic and social progress in Afghanistan, particularly for women, but they were also marred by corruption allegations.

The U.S. withdrawal is ahead of schedule, on track to conclude by the summer, according to the Pentagon. The risk of a power vacuum is concerning former Department of Defense and State Department officials, as well as existing contractors and advocates pushing for visas for Afghan allies.

(CNN) — As America's war in Afghanistan comes to an end, many see the inevitable parallels to Vietnam -- a long aimless war, a determined enemy ready to out bleed us, and now an evacuation reminiscent of the chaos of Saigon's final hours. When a war ends, two questions loom...

First flight of Afghan interpreters fleeing Taliban arrives in US

More than 200 Afghan interpreters who helped US troops and diplomats arrived in the United States Friday, the government said, the first of tens of thousands expected to immigrate to flee the threat of Taliban retaliation. President Joe Biden announced the arrival of the first of several such flights expected through August, as the US withdraws its last troops and rushes to move to safety those Afghans who provided crucial help during the two decades of war.

First Afghan evacuees head to US

The first group of Afghans who aided U.S. forces is on the way to the United States to complete the application process for a special visa.

House Speaker Nancy Pelosi failed to push legislation through the House that would extend an eviction moratorium as part of a last-minute effort.

Washington [US], July 30 (ANI): The first flight evacuating Afghans who worked alongside Americans in Afghanistan has brought more than 200 people to the United States. Friday's arrival at Dulles International Airport outside Washington, D.C., brought Afghan translators and close family members, including scores of children and infants to start a new life in the United States.

President Joe Biden urged states to push federal funds out the door Friday night as lawmakers scrambled to try to jam through legislation that would keep millions of Americans from being evicted amid an expiring ban as the Delta variant proliferates. With no certain solution in sight, the White House...

The Afghan interpreters, guides and contractors who’ve aided U.S. troops since the beginning of the war in Afghanistan have targets on their backs now that Americans are leaving the country. Their exposure to the Taliban, and that of their families, has hastened efforts to evacuate them from the country and speed the laborious process for those applying for entry into the United States.

On a recent afternoon in Kabul, three Afghan men walked up to the table where I was sitting with colleagues in a local restaurant. We had arrived early for an interview, and our presence had somehow drawn their attention. “Are you journalists?” one of the men asked, his voice muffled by the Lebanese pop music blaring overhead. I answered yes with a sense of unease. As security has deteriorated in the Afghan capital, fewer foreigners have ventured out in public. “We would like to talk to you, please,” the man said. “We came here from Baghlan two weeks ago and are civil-rights activists.”

Biden meets with Belarusian opposition leader at the White House

The first flight carrying about 200 at-risk Afghan evacuees, who helped U.S. and coalition forces during the 20-year mission in Afghanistan, arrived in the U.S. at Fort Lee, Va. on Friday morning. Afghans who served as cultural specialists and interpreters for U.S. and Coalition troops throughout the two decades of...

President Biden will tour the Lehigh Valley operations facility for Mack Trucks, a chance to touch base with the plant's 2,500 workers, a majority of whom are unionized.

WASHINGTON — The Biden administration announced new sanctions on Friday against Cuba's national revolutionary police and its top two officials as the U.S. looks to increase pressure on the communist government following this month's protests on the island. The Police Nacional Revolcionaria and the agency's director and deputy director, Oscar...

(CNN) — President Joe Biden met with Arizona Sen. Kyrsten Sinema on Tuesday at the White House as his administration ramped up its push for a path forward for its sweeping dual track infrastructure agenda. Sinema is the lead Democratic negotiator in the bipartisan infrastructure talks -- negotiations that for...

Is President Biden Prematurely Ending The War On Terror?

On Monday President Biden hosted Iraqi Prime Minister Mustafa al-Kadhimi in the Oval Office, where he announced that the U.S. combat mission in Iraq will conclude at the end of 2021. The President adding that American troops will continue to train and assist Iraqi forces in the fight against ISIS. Meanwhile, the timetable is still set for military operations in Afghanistan to be over by August. So is the war on terror finally coming to an end? Rep. August Pfluger (R-TX) weighs in on what it means for America’s foreign policy.