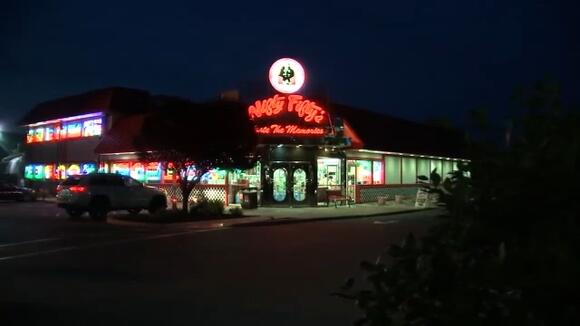 A waitress chasing a group of customers who skipped out on their bill at a New Jersey restaurant was abducted and assaulted Saturday night, and police are searching for multiple suspects wanted in connection with the incident. It happened around 11:15 p.m. at the Nifty Fifty's in Turnersville. Police say the 20-year-old waitress was taken away in a vehicle and assaulted after she confronted the group of five who left without paying for their $70 meal. "They're having trouble finding wait staff due to the pandemic, and she came out to confront them," Washington Township Police Chief Patrick Gurcsik said. MORE NEWS: Kids miraculously not hit in brazen broad daylight shooting on NYC sidewalk

Disturbing video shows a 10-year-old girl and her 5-year-old brother duck for cover as a man opened fire just inches away.

Surveillance video obtained exclusively by sister station Action News in Philadelphia shows the horrifying moment the waitress was abducted. "They pulled her into the vehicle and assaulted her inside the vehicle," Gurcsik said. Video shows one person bolt out of the vehicle, and then the group drives away with the waitress inside. "The vehicle headed north on Route 42, made a U-turn and was heading south towards Monroe Township, and pushed her out of the vehicle," Gurcsik said. Police said the woman was able to run back to the restaurant and call police. She suffered bruises and a possible concussion, and she was taken to a local hospital and has since been released. 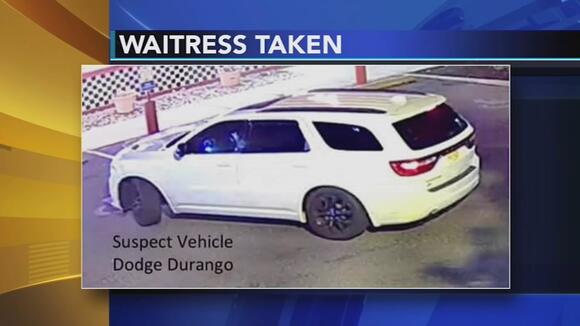 John Hill, an employee at the restaurant, said he was shocked. "Say it ain't so," Hill said. "As an employee, that makes me feel bad. And mad." Customers who heard the news Sunday night were also shaken up. "This is such a family restaurant," Lindenwold resident Stacie Garris-Oliver said. "This is crazy." ALSO READ | Report of glider plane down 'unfounded' after frantic search in waters off LBI

The Ocean County Sheriff's Office tells ABC News that reports of glider down in the waters off Long Beach Island were "unfounded," after the news sparked a frantic search for the plane and possible victims.

The suspects were last seen driving in a newer model white Dodge Durango on Rt. 42 south near Monroe Township. Police said employees should try to take down the license plate of customers who dine without paying and call authorities. "Do not chase after accused suspects and confront them yourselves," Gurcsik said. Anyone with information is asked to call police at 856-589-0330 ext 1160 or you can email tips to Det. M.Longfellow at mdlongfellow@pd.twp.washington.nj.us . ---------- * Get Eyewitness News Delivered * More New Jersey news * Send us a news tip * Download the abc7NY app for breaking news alerts * Follow us on YouTube

Body camera footage shows one officer and bystanders lifting the car as another officer pulls the baby out from underneath.

Police say the man picked up a metal pipe, refused to drop it, and then lunged at the responding officers.

A woman is facing charges of bias intimidation, harassment, and assault after her tirade of racial slurs was caught on video at a hotel in New Jersey.

Sandra McIntosh, 46, was picked up in her own car by her ex-boyfriend at Stony Brook Hospital around 7:30 p.m. He reportedly said he was picking up items at McIntosh's place, according to the victim's sister.

Funeral services were held on Friday night for the New Jersey mother found murdered after an Amber Alert.

A multiple-car crash in Queens left at least six people injured, two of them critically.

Part of Queens is on heightened alert following a group attack on a man walking a dog.

Police say it appeared that a 4-year-old boy had fallen from a 10th floor balcony at an apartment complex located at 1500 Noble Avenue.

Police said a car traveling on Montauk Highway in Quogue veered into oncoming traffic and slammed into another vehicle.

All four occupants jumped out of the SUV and fled on foot after the crash.

The police commissioner said two officers, who were grabbing breakfast at a bagel shop next door, ran over and lifted the car off of the mother and child.

Dozens of people were left homeless after a massive fire at the Bristol Station Apartments in Carteret on Friday.

The latest efforts by New Jersey authorities to reduce gun violence have lead to charges against 14 members of a major gang-led drug ring in Paterson.

NYPD Sergeant Phillip Wong allegedly assaulted a suspect who called him anti-Asian slurs and another who spit at him in a holding cell.

Homicide detectives are investigating after three people were found dead inside a Suffolk County home.

Woman struck over the head with kitchen pot, has walker stolen in Upper Manhattan

What began as a verbal dispute turned physical and the woman was kicked and punched and then struck over the head with a kitchen pot before having her walker stolen.

An escaped bull has eluded capture for several days on Long Island despite searchers employing a helicopter and night-vision equipment along with attempts to lure the roaming animal with grain and a cow.