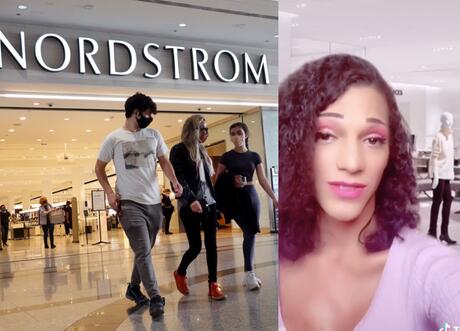 A woman has claimed she was refused service in a department store because she was trans .

On TikTok , a user named Licca said she went to Nordstrom , an American department store but was snubbed by an employee who told her to find someone else to help her when she tried to exchange an item.

“As a transgender woman of colour, I build myself up before I go out anywhere because I know I’m going to face discrimination and that is exactly what I did before I entered Nordstrom.”

She then described how the woman pointed at her and told her to talk to someone else, despite there not being anyone else in the department and added that the worker in question then went over to help an “affluent white woman” instead.

“Her demeanour towards me was so rude, she made it clear she wanted nothing to do with me,” she said.

“She treated me with such disrespect.” 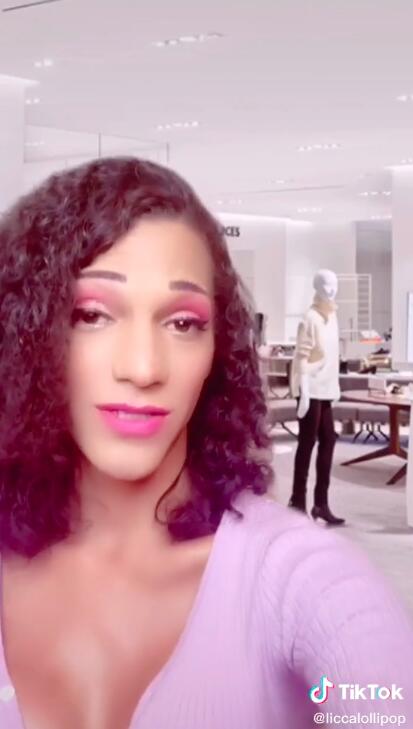 Licca added that she contacted the store and they emailed her an apology. They said they may move the woman in question to another department but did not confirm it.

In response, a spokesperson from Nordstrom said on TikTok:

“We are so sorry to hear this was your experience. The behaviour described is unacceptable and we have no tolerance for discrimination of any kind.”

In a follow-up video, Licca responded to the apology and said it was “just words” and called it “inadequate”.

The apology from Nordstorm said: “[Redacted] alerted me to your recent experience in our store. Please know that I take this very seriously and sincerely apologise. I appreciate you bringing this to our attention as it has made me aware of an opportunity I have with [redacted] has allowed me to follow up with her and the Department Manager. Nordstrom expects salespeople to make our customers feel welcome and valued, if a salesperson has trouble achieving this, they may be moved into a position where they are not working directly with our customers.“ 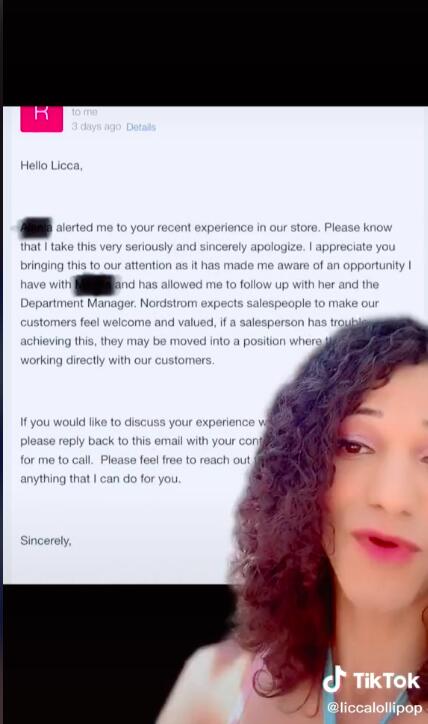 Licca received messages of support from people who viewed her TikTok videos. One user commented: “Why are these brands all talk?”

Another said they were “never shopping at Nordstrom again”.

A third wrote: “Get it together or you’re going to lose a lot of customers.”

In a statement to indy100 , a spokesperson from Nordstrom said: “We are sorry to hear our customer was disappointed in their experience at our Corte Madera store. We are committed to creating a welcoming and respectful environment for all of our customers and do not tolerate discrimination of any kind. We have addressed the misunderstanding with the employee and have used this experience as an opportunity to coach all our employees so they can consistently offer good service.”

A woman has claimed that she was told to leave a garage where she was having her car inspected because her crop top and shorts were too “inappropriate” for the facility. In a viral TikTok video that has been viewed more than one million times, Tia Wood says that she was “told to wait outside the inspection station because my shirt was too inappropriate.” She then reveals that she was wearing a pair of denim shorts, white trainers and a short crop top, but nothing out of the ordinary. In a follow-up video, Wood sarcastically mocks the alleged incident...

A former longtime Walmart employee with Down syndrome was awarded a $125million in a discrimination case after the retail giant changed her work schedule and eventually fired her for chronic absenteeism. Marlo Spaeth, who was with the Manitowoc, Wisconsin store for 16 years before she was fired in 2015, needs...

A transgender woman claims Uber has refused to let her change the name on her account leading to drivers calling her "sir". Charlie Hadley, 33, started transitioning a year ago and wanted to change her name to avoid being "outed" on each ride by the app. She filled in a...

Pregnant teen mum, 17, embarrassed to invite friends over as home 'stinks of damp'

A pregnant teenage mum is embarrassed to have her pals around her home because she claims it stinks. Sophie Smith, of Dewsbury Moor, West Yorkshire, said the damp smell in her council accommodation is so overpowering she has to spray air freshener every day. The 17-year-old moved into the property...

There appears to be a shift in attitude at airports nowadays, and it seems passengers' patience is running thin. In the latest series of airport freak-outs, a video that went viral on Reddit shows a woman having a meltdown at check-in at an airport while her young child cries and begs her to stop.

A woman has shared a building blunder after workers apparently turned up at her house by mistake – and she decided to let them continue with the work. TikToker Chloe posted a series of videos about the mix-up, after the workers allegedly turned up “at the wrong house.”. In the...

A mum was left frightened and horrified when a stranger crept into her home at night to use her toilet. Kirsty MacDonald, 36, from West Midlands, was asleep on her sofa when she woke up to the sound of her toilet flushing, but before she could work out what was happening, a figure ran down the stairs and through her unlocked door.

A white woman went into a rage after being put on blast for stealing from a local Black-owned business. Rapper Richard Bougere and his wife Danielle Banks own The Pop Up Shop, a San Francisco-based retail store that sells products created by Bay Area artists, Fox News reports. The store opened at the start of the summer and has already had to deal with shoplifting.

A woman was left feeling “very upset” after airline staff told her to cover up before a flight because she was “showing too much skin”. Courtney Newbold was about to board an Air New Zealand Rarotonga-Auckland service on 23 July when she claims two separate flight attendants remarked on her outfit.

Woman, 32, who only drank Diet Coke went from 19 stone to anorexic in lockdown

A woman who drank only Diet Coke and laxatives saw her weight go from morbidly obese to being anorexic. Natalie Bradley, 32, ended up being admitted to hospital shortly before the country went into lockdown as she tried obsessively to control her weight. Weeks went by when the only thing...

A Chick-fil-A employee attempted to expose the well-loved fast-food chain on TikTok earlier this month. The user posted a TikTok of an employee scraping the breading off of chicken with the caption "and y'all be eating this." The employee filming the video asks the person scraping the chicken what it's used for and they respond that it's for the chicken soup.

In a viral TikTok video, a Black woman says that the cashier who was ringing up her purchases at Final Touch Jewelry in New York City accused her of stealing. The TikToker, Veleda Spellman, told the Daily Dot that the cashier said he wanted to “see what was in [her] bag” because he said he saw her stealing. In the video, Spellman is seen emptying her bags and purse to prove that she didn’t steal anything from the store.

Woman says she was attacked by rats in London park

A viral TikTok video, which has been viewed more than 14 million times, has claimed that a McDonald’s restaurant used five paper bags to send just one single sachet of sauce. In a video shared by an account going by the name of Monikaw, they write “I accidentally ordered one...

Five men in hoodies, masks, and gloves tried to trick a homeowner into letting them in for a robbery by pretending to be 'a random kid' and pleading for help. Frightening security footage showed the group of thugs lurking around their target's house on a quiet street in Tarneit, in Melbourne's west, at 11pm on Tuesday.