‘What the hell is this?’: American’s review of British beach goes viral 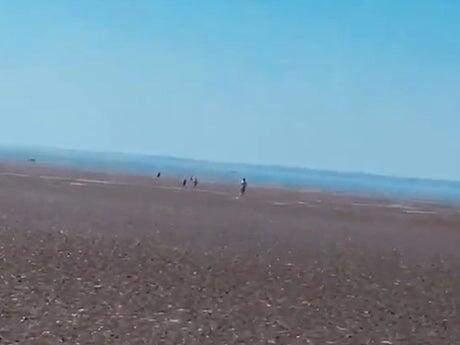 An American’s review of a British beach quickly went viral after he shared his disappointing experience online.

“What the hell is this?” Nick Alexander , originally from Miami, said upon visiting Weston-super-Mare for the first time.

Mr Alexander made the comments in a series of videos uploaded to Tiktok , which have since been viewed more than 100,000 times.

Alongside footage of him wading through silty, mud-like sand at low tide, he said: “I don’t know who decided to call this a beach – but where I come from beaches don’t look like this.”

In another video, Mr Alexander added: “Today I tried to go swimming in a British beach and it didn’t work out so well.

“It’s just horrible. What the hell is this?”

Complaining of the “goddamn mud” and lamenting that the sea was “like 20 miles away”, he wrote in a caption that “Someone needs to take me to a real UK beach please!”, citing Devon and Cornwall as his top destinations.

He also had an idea for how Weston-super-Mare could solve its low-tide problem: by “building a little path all the way to the water for when the tide goes out. A little bridge type thing”.

The day was somewhat salvaged by a trip to a funfair and a ride on the roller coaster.

”I'm definitely going to go to Cornwall or Devon to find me a better beach because I need to go swimming this summer in the UK, baby,” he added.

Social media users were quick to point him in the direction of other beaches.

”Ah no,” wrote one commenter. “You went to the wrong beach, I promise they are not all like that.”

Mr Alexander has been making Tiktok videos about his experience as an American in the UK after moving to Wolverhampton, clocking up more than 117,000 followers in the process.

Looking for a laugh? Amazon reviews are a surprisingly good source. Like this review for a banana slicer, that reads, “Gone are the days of biting off slice-sized chunks of banana and spitting them onto a serving tray…. Next on my wish list: a kitchen tool for dividing frozen water into cube-sized chunks.” And a mom has come up with an entertaining review for a dress she bought for her daughter that has us laughing, too.

A British woman has sparked debate after appearing on ITV’s Lorraine to complain about the conditions of her isolation in a hotel room in Mallorca. The Spanish isle was readded to the UK's amber list at 4am on Monday morning, forcing stricter travel rules on those returning to the UK.

A United Kingdom mother said her family suffered a “humiliating experience” at a sporting-goods store where a broken elevator meant her wheelchair-bound daughter had to “crawl on the floor.”. Ann-marie Yönetci visited a Cornwall-based Sports Direct on July 26, where she found the elevator that took customers up from the...

A guest at a Marriott resort in Mexico wrote a critical one-star review of her hotel on TripAdvisor after witnessing another tourist being dragged into the ocean by a crocodile. A teenager from California was attacked and dragged underwater by the huge animal while vacationing at the resort, ending up in hospital after fighting it off. Kiana Hummel, 18, managed to keep the crocodile away long enough for others to intervene and help her out of the reptile’s grip during her visit to Puerto Vallarta on Mexico's west coast. A guest named Natalie wrote a review of the hotel,...

There was 'carnage' at a hotel as fed up customers had to sleep in the lobby after rowing with staff while trying to check in. After heated arguments staff threatened to call the police on at least two people for shouting when they struggled to find them a room. Customers...

‘It’s really nothing to be ashamed of’: Photo of adorably ‘embarrassed’ raccoon goes viral

One little critter got himself into an awkward situation that has gone viral on the internet. On Wednesday, the City of Dalton Fire Department in Georgia shared an adorable photo of what appears to be an embarrassed raccoon. The department said the little guy had made his way inside of a home in Dalton, Georgia—probably looking for a late-night snack—and couldn’t find his way out.

MIAMI (WSVN) - A Miami makeup artist has become the face of Cubans’ fight for change after a self-portrait she posted to social media went viral. Residents of the island nation have taken considerable risks to fight back against a dictatorship that has been in power for over six decades.

Baby born with twin inside her stomach in extremely rare pregnancy

A fetus-in-fetu occurs once in every 500,000 births. Top experts performed an operation to remove two sacs out of the girl’s stomach. The baby girl survived and is expected to make a full recovery. A newborn baby shocked doctors after an x-ray revealed she carried a twin fetus inside her...

The ‘greedy’ wife of a cocaine mogul provided a ‘ludicrous reason’ to explain her lavish lifestyle.

‘Greedy’ wife of cocaine boss gave ‘ludicrous excuse’ to explain her life of luxury. A judge called her excuse “frankly ludicrous” as he sentenced her and two other women. The “greedy” wife of a big drug dealer was sentenced to prison for living a lavish lifestyle that included expensive vacations...

Fake prescription anti-anxiety pills are thought to have left several people seriously ill in hospital. Swansea Bay health board said they were taken to Morriston Hospital after overdosing on Wednesday. It said it believed the tablets were being sold illegally as Valium and Xanax in Swansea and Neath Port Talbot.

Why you should NEVER sleep with a fan on overnight during the heatwave: Experts reveal air blowing can trigger allergy and asthma attacks

With much of England set to sizzle in highs of up to 90F today, many will be turning to their electrics fans in a desperate bid to cool down come bedtime. But while fans are an ideal way to stay cool for short periods of time, keeping them on all night may have several negative impacts on your health, according to Sleep Advisor reports.

A video that could make one's hair stand up on the back of one's neck had social media and neighbors of Maxine Hughes up in arms with only a priest able to resolve the terrifying incident. Nicki Mulheron took to Facebook to share footage from her sister, Maxine Hughes' CCTV...

This Morning viewers were left in floods of tears as a nine-year-old girl with terminal cancer had one of her wishes granted on the show today. Sophie Fairall was diagnosed with rhabdomyosarcoma - a rare type of cancer that forms in children's soft tissue - in September 2020. She appeared...