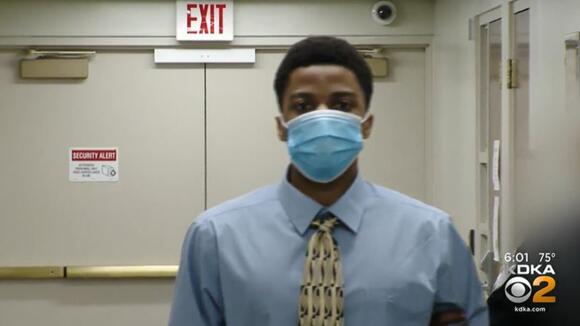 BEAVER, Pa. (KDKA) — Day 10 of the murder trial of Sheldon Jeter is in the books.

The prosecution rested its case Monday after a ballistic expert testified that the gun found under Jeter’s bed in Aliquippa ballistically matched evidence from the murder scene of Tyric Pugh.

But defense attorney Michael Santicola called into question the veracity of ballistic evidence.

“Sheldon Jeter was charged with murder for five months before they did the test. Then they handed an alleged murder weapon saying we want you to test this. That’s suggesting an answer already is there,” said Santicola.

Jeter is charged with the May 2020 shooting of the 30-year-old Pugh on Kiehl Street in Aliquippa.

The biggest moments in court on Monday didn’t happen in front of the jury, but when the defense told the court that Jeter would not be testifying.

He is also a central figure in the Rachael DelTondo homicide case.

DelTondo was shot to death on Mother’s Day of 2018 in front of her parents’ Aliquippa home. DelTondo was alleged to have had a romantic connection to Jeter while he was a teenager, none of which was brought up in any testimony in front of the jury.

“We’ve been very careful to keep any mention of that case out of this case and that would’ve not been permitted. If a witness even began to talk about that, it could possibly be a mistrial,” Santicola said.

The defense plans on resting first thing on Tuesday. It’s likely the jury will have this case sometime in the afternoon.

YOUNGWOOD, Pa, (KDKA) — Police say a man in Westmoreland County accidentally shot his downstairs neighbor. Robert Hood said he was sitting on the floor watching TV but then decided to move to the couch. That single move may have saved his life. “I heard a little bang and I looked down and see the top of my hand with a little blood,” Hood said. (Photo Credit: KDKA) What happened, according to Hood and state police, is that the 69-year-old man’s upstairs neighbor — Shawn Moran — was trying to use the toilet when he said his 9mm pistol got caught in his shirt...

BEAVER, Pa. — Beaver County Judge Kim Tesla rejected a defense call for a mistrial Wednesday and sentenced Sheldon Jeter to life in prison without parole for the murder of Jeter's friend, Tyric Pugh. Jeter, 23, of Aliquippa, was convicted by a jury last month of first-degree murder in the fatal shooting of Pugh.

Attorneys for Sheldon Jeter are asking for a mistrial following their client's conviction in the death of his close friend. KDKA's Andy Sheehan has the latest from the courtroom.

COLUMBIA, S.C. (WIS) - After day five of testimony in the Nathaniel Rowland murder trial, both the state and defense rested their case. Rowland is accused of kidnapping and killing UofSC student Samantha Josephson in March 2019 when she reportedly got into his car in Five Points thinking it was her Uber.

BEAVER — A Beaver County judge on Wednesday sentenced Sheldon Jeter to life in prison without the possibility of parole after denying a mistrial motion filed by his attorney. Jurors last month found 23-year-old Jeter guilty of first-degree murder in the shooting of 30-year-old Tyric Pugh. The former Aliquippa football...

A Beaver County judge has denied Sheldon Jeter's motion for a mistrial in his conviction for the shooting death of Tyric Pugh in Aliquippa. KDKA's Andy Sheehan has more on the sentence handed down.

Sheldon Jeter Jr. Scheduled to Be Sentenced Today, Defense Will Ask For Mistrial Due to Juror Misconduct

(Beaver, Pa.) Sheldon Jeter Jr is scheduled to be sentenced in Beaver County Court today. Jeter was convicted by a jury of the murder of his life long friend and room mate Tyric Pugh in May of 2020. According to reports the defense is expected to ask for a mistrial...

SAN ANTONIO - Testimony continued Friday on Day 10 of the capital murder trial of Otis McKane. McKane is accused of killing San Antonio Police Detective Benjamin Marconi while he sat in his patrol car in front of Public Safety Headquarters in 2016. After calling more than 50 witnesses, the...

The defense rested without calling any witnesses Monday in the murder trial of a man accused of killing a South Carolina college student who mistakenly got into what she thought was her Uber ride. The judge sent the jury home for the day, scheduling closing arguments for Nathaniel Rowland's trial...

Defense rests its case in Otis McKane trial in the death of SAPD Det. Benjamin Marconi

The defense presented its case in two hours on Monday.

BRUNSWICK, Ga. (WTOC) - A pre-trial hearing has been scheduled for Thursday in the Ahmaud Arbery case. Three white men are charged with murder in the February 2020 killing of Arbery, a 25-year-old African American who was chased and shot after two of the defendants spotted him running in their Georgia neighborhood.

The defense in the capital murder trial of Otis McKane — the man accused of fatally shooting San Antonio police Detective Benjamin Marconi — rested its case July 26, on the 11th day of the trial. The trial has been conducted in the 379th District Court in San Antonio. McKane...

The trial of the final defendant charged in the 2016 shooting deaths of two people in Claremont was delayed Monday in Catawba County Superior Court. The trial of Arsenio Curtis was scheduled to begin this week but has been rescheduled for September. Curtis, 30, is charged with the slayings of...

She was the star witness for the prosecution in the trial of Keith Raniere. After helping convict the leader of the self-help group called NXIVM, Lauren Salzman learned her fate Wednesday. Salzman was sentenced to five years’ probation and 300 hours of community service. She was facing up to nine...

SOUTH LAKE TAHOE, CA – It’s a case that has much notoriety, going forward to the appellate courts on the issue of SB 1437, a law that modifies the state’s felony murder law. And, on Friday, Harvest Cycle Davidson was back in El Dorado County Superior Court in South Lake...

By: KDKA-TV News Staff DAYTON, Ohio (KDKA) — A gun manufacturer is being sued by family members of the victims of the 2019 mass shooting in Dayton, Ohio. The lawsuit asks for damages and an injunction against Kyung Chang Industry USA Inc. It wants to prevent the company from selling its 100-round, large-capacity ammunition magazines. Nine people died, including Washington County native Nicholas Cumer. Thity-one other people were injured. Police shot and killed the gunman.