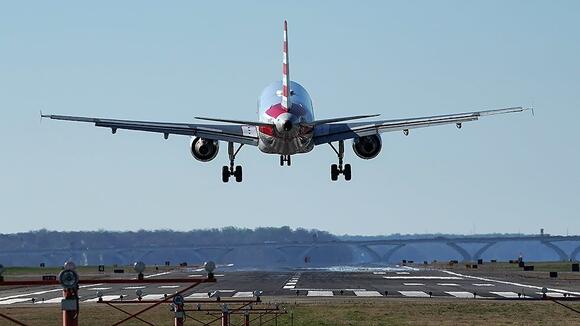 American Airlines is canceling hundreds of flights for at least the next few weeks as a combination of factors threaten regular business operation.

A heavy uptick in travel, labor shortages and weather are contributing to the cancellations, expected to last until mid-July at the earliest.

"The first few weeks of June have brought unprecedented weather to our largest hubs, heavily impacting our operation and causing delays, canceled flights and disruptions to crew member schedules and our customers' plans," Stacey Day, a spokeswoman for the airline, told The Hill.

She added, "That, combined with the labor shortages some of our vendors are contending with and the incredibly quick ramp up of customer demand, has led us to build in additional resilience and certainty to our operation by adjusting a fraction of our scheduled flying through mid-July."

According to Day, the cancellations will be focused in areas with bigger airports where travel plans can be more easily adjusted by the airline.

"We made targeted changes with the goal of impacting the fewest number of customers by adjusting flights in markets where we have multiple options for re-accommodation," she said.

People flying American Airlines through July 15 whose flights are affected will be notified ahead of time.

On Saturday, the airline canceled 120 fights, and travelers can expect 50 to 80 canceled flights a day until conditions improve, CNN reported.

Air travel has significantly increased as vaccination against COVID-19 ramps up across the country. Earlier this month, the Transportation Security Administration screened the highest number of travelers since the pandemic began.

American Airlines has previously taken steps to deal with the travel surge, including asking its employees to volunteer to help staff Dallas-Fort Worth International Airport.

It seems like every day there's a new story about airline passengers behaving badly. There's been videos of passengers taped to their seats, passengers punching flight attendants, and passengers freaking out while in the air. This time an anonymous American Airlines employee at the Dallas-Fort Worth International Airport is being...

United Airlines is warning that runway construction plus a failure of JetBlue to cap flights is hurting operations at Newark Liberty International Airport and already leading to delays and cancellations. United Warns Of Delays + Cancellations At Newark Airport. United Airlines held an employee town hall on Wednesday in which...

An American Airlines flight was delayed about two hours Friday after a passenger who allegedly refused to wear a mask and became unruly. After passengers boarded the flight, which was scheduled to fly from JFK International Airport in New York to Miami International Airport, the man began fist-bumping and taking selfies with other passengers while not wearing a mask, according to WPLG-TV, a news station based in Miami.

(NerdWallet) – Airlines always seem to have one more trick up their sleeves for adding fees to the cost of airfare. Anyone who has flown in the past few years knows that some airlines now charge for basics, like carry-on bags and a printed boarding ticket. Yet one sneaky charge is often ignored by even savvy travelers: seat selection fees.

Airline Crew Forced To Sleep On Plane After Flight Diverted

A flight crew from SkyWest Airlines says it was forced to sleep on the plane after its flight was diverted by thunderstorms to a small Colorado town that had no available hotel accommodations. The incident happened on July 17 during a trip from Denver to Raleigh, N.C., and back to...

Viral video captured an American Airlines passenger being booted off a Texas-to-Florida flight after she allegedly refused to properly mask up. The action unfolded Saturday at Dallas-Fort Worth International Airport as passengers boarded Flight 2823 to Miami, which was running four hours late due to a maintenance issue. An agent...

Southwest Airline's on-time performance in June was 62.5% and is running at 67% in July. The airline says the worst is behind it.

Woman booted from American flight for cursing at attendant

FORT WORTH, Texas — An unnamed American Airlines agent at Dallas-Fort Worth Airport is being applauded on social media for his calm demeanor after coming face to face with a woman who apparently cursed at a flight attendant during a mask dispute. The incident was caught on video — it...

On Thursday, American Airlines and Southwest Airlines, two of the leading American carriers based on Dallas, Texas, had posted quarterly earnings’ profit for the second quarter of the year that ended on June 30, largely riding on the back of a rebound in bookings alongside federal aids, while the airlines also had raised revenue forecast for coming months as more and more people were reportedly looking to travel following months-long restriction.

Lately, United Airlines has been experiencing something unusual for the Chicago-based company: good publicity. Just this week, United ranked higher than any other U.S. airline on the annual list of the world's top 20 carriers compiled by AirlineRatings.com. Based on an assessment measuring safety, passenger reviews, and tech innovation, Qatar...

Several months ago, I found award space for round trip flights from Orlando to Austin on American Airlines. Since this was considered “saver” award space, it was bookable using 9,000 BA Avios for each segment (36,000 Avios for two round trip tickets.) I was thrilled to finally use the Avios...

I travel to 20+ countries a year sharing my firsthand knowledge of reward travel, travel credit card deals, travel tips and more. Chalk one up for the airlines. I have to tell you, I’m so sick and tired of reading about and seeing poorly mannered, entitled people travel that I’m happy to see airlines sticking up for what’s right.

DALLAS – American Airlines and Southwest Airlines both posted second-quarter profits on Thursday thanks to generous federal pandemic relief that covers most of their labor costs. The reports on Thursday underscored the progress that airlines are making in rebuilding after the coronavirus crushed air travel – and how much farther...

In a significant development, American Airlines has announced plans to launch new nonstop flights to a pair of Caribbean destinations: Anguilla and Dominica. Crucially, will be the only nonstop flights from the United States to either destination, broadly opening up the islands to a new level of tourism. Both Anguilla...

American Airlines has spent the last few years working on retrofitting its aircraft to standardize its interior cabin offerings. On the narrowbody side, this has meant taking out older seats and configurations and replacing them with newer products, cabin densification, and inflight WiFi over seatback entertainment. The airline thus far is sticking with that plan.

Two women from the Bronx have been charged with assault and interfering with flight crew after they were accused of hurling racial slurs, spitting on one of their seatmates and assaulting one of the flight attendants on an American Airlines flight from Dallas Fort Worth to Los Angeles. If found...

An American Airlines passenger was booted off a Texas-to-Florida flight after allegedly refusing to wear a mask. The video was taken by another passenger and has gone viral on social media. In a statement, American Airlines said a customer was not allowed to travel after failing to comply with the federal mask mandate and addressing one of our team members using profane language. NBC News does not know what actually happened on the plane.July 22, 2021.