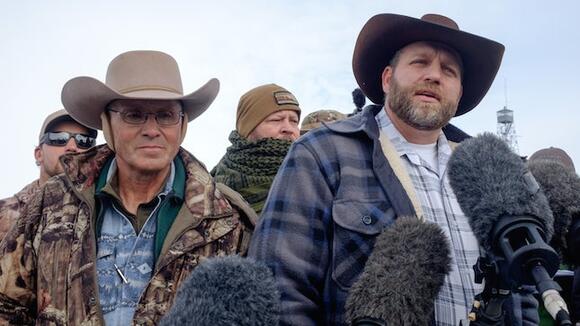 Ammon Bundy, a leader of the 2016 armed occupation at a federal refuge, has announced his candidacy for governor of Idaho.

Bundy, in a video posted on Saturday, said he is running for governor because he is “sick and tired of all of this political garbage just like you are.”

“I’m tired of our freedoms being taken from us, and I’m tired of the corruption that is rampant in our state government,” he added.

Bundy, who is running as a Republican, will join the GOP primary to challenge Idaho Gov. Brad Little (R).

Idaho Lt. Gov. Janice McGeachin (R) announced her candidacy last month, after she and Little spent more than a year sparring over pandemic measures, including emergency declarations and lockdowns.

Bundy, in his announcement video, said Idaho has a “great opportunity” to “preserve our rights and freedom” and “thrive by expanding and upholding the principles of liberty and prosperity.”

“God has given us these blessings, and I believe with his help Idaho can become that beautiful and shining city that is set on a hill that serves as an example for the rest of the country and for all the world to see,” he added.

Bundy's official announcement comes after he filed to run for governor last month.

Bundy gained national recognition in 2016 after he and others were arrested for occupying the Malheur National Wildlife Refuge for 41 days.

The group was charged with conspiracy to impede federal officers and possession of firearms in a federal facility. They were eventually acquitted.

Bundy’s family is also known for a 2014 standoff at a ranch belonging to Cliven Bundy, Ammon Bundy’s father.

Bundy also said he is running for governor to “bring that same vigor and willingness to stand for what is right to the state of Idaho.”

He also took direct swipes at President Biden , accusing him and “those in the deep state that control him” of having plans to take away gun rights, freedom of religion and parental rights and to “further violate the Constitution in unimaginable ways, even more than they’ve already done.”

“The federal government under Joe Biden and the existing establishment will continue their onslaught against the people, and we simply can’t afford to have leadership in our state back down and comply with federal tyranny,” he added.

Bundy in March was arrested in Idaho for refusing to wear a mask when entering a courthouse, which caused him to miss his own trial, resulting in a charge of failure to appear.

He was facing charges related to refusing to leave the Idaho state legislature last year after a hearing he was scheduled to attend was moved.

Last August, Bundy was banned from entering the Idaho Capitol for a year following two arrests, according to the Idaho Statesman.

Maricopa County and Dominion Voting Systems have both refused to comply with a subpoena from the GOP-controlled Arizona state Senate demanding that representatives from the county and the company produce materials as part of its audit of the 2020 presidential election. The Arizona Republic reported that the Maricopa County Board...

A man who was charged after storming the U.S. Capitol on Jan. 6 was turned in by his co-workers who said he bragged about his experience participating in the attack. Donald Smith was arrested on Thursday and charged with knowingly entering or remaining in a restricted building without authority, disorderly and disruptive conduct in a restricted building, violent entry and disorderly conduct on Capitol grounds and parading, demonstrating or picketing in a Capitol building.

Louisiana Gov. John Bel Edwards (D) reinstated a statewide mask mandate for everyone 5 years old and up as the Pelican State has hit the most cases per capita in the U.S. The governor announced the mask requirement over Twitter, citing surging COVID-19 cases and hospitalizations, which he said are “threatening the ability of hospitals to deliver care.”

The coronavirus officially returned to the United States Senate on Monday. News that Sen. Lindsey Graham (R-S.C.) tested positive quickly jolted through the Capitol and sparked an hours-long scramble to figure out who else might have been exposed, which only escalated after sources confirmed that the South Carolina Republican attended an outdoor event on Sen. Joe Manchin ’s (D-W.Va.) houseboat over the weekend with other senators.

Sarah Palin, the former governor of Alaska and 2008 Republican vice presidential nominee, said she is praying on whether to challenge Sen. Lisa Murkowski (R-Alaska) next year. Speaking last month at a leadership conference co-sponsored by Harvest International Ministry and the Latino Coalition for Israel, Palin expressed some reservations about a potential Senate run, saying that “it would be a sacrifice.”

The Biden administration will keep in place a Trump-era policy of turning migrants away at the southern border without allowing them to claim asylum due to the COVID-19 pandemic. The Centers for Disease Control and Prevention announced an extension of the policy in a statement on Monday, determining that "introduction...