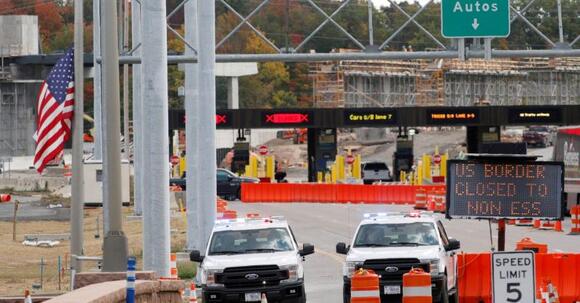 The 30-day extension came after Canada announced its own extension on Friday of the requirements that were set to expire on Monday and have been in place since March 2020 because of the coronavirus pandemic.

The U.S. government held working-group meetings with Canada and Mexico on the travel restrictions last week and plans to hold meetings about every two weeks, U.S. officials told Reuters.

Homeland Security said in a statement it noted "positive developments in recent weeks and is participating with other U.S. agencies in the White House’s expert working groups with Canada and Mexico to identify the conditions under which restrictions may be eased safely and sustainably."

Some U.S. lawmakers and border communities that have been hit hard by the restrictions have pushed to relax them ahead of the busy summer travel season.

Canada is also under pressure from companies and the tourism industry to ease the ban, which was imposed to help contain the spread of the coronavirus and has been renewed on a monthly basis since March 2020.

Canadian Prime Minister Justin Trudeau stood firm, saying last week the border would stay largely shut until 75% of Canadians had received the first of a two-dose coronavirus vaccine and 20% had been given both shots.

In talks between the United States and Canada last week, the U.S. government did not endorse setting a specific threshold to trigger lifting the restrictions, a person briefed on the talks said.

"The inability of the U.S. and Canadian governments to reach an agreement on alleviating border restrictions ... is simply unacceptable," Democratic Representative Brian Higgins and Republican Representative Bill Huizenga, co-chairs of the Canada-U.S. Interparliamentary Group said on Friday.

The United States is also holding working-group meetings on relaxing travel restrictions with the UK and the European Union, but U.S. and airline officials said previously they did not expect the Biden administration to lift the restrictions until around July 4 at the earliest.

MEXICO CITY, July 29 (Reuters) - Mexico is working with pork producers to firm up sanitary measures and “epidemiological surveillance” following a confirmed case of African swine fever in the Dominican Republic, the Mexican Agriculture Ministry said on Thursday. Mexican officials will reinforce animal inspections at all ports, airports and...

MEXICO CITY — Frustrated by raging violence, the Mexican government is seeking to overhaul the Merida Initiative, a $3 billion U.S. aid program that’s been the centerpiece of security cooperation between the two nations for more than a decade — but has failed to reduce bloodshed. Mexican officials say they...

The U.S. border will remain closed to Europeans and the United Kingdom for the time being, with President Joe Biden and health officials citing delta variant concerns. Some European leaders are expressing impatience with the lack of reciprocity, especially as the trends in Europe closely resemble those in the USA.

CAIRO - (Reuters) - Saudi Arabia’s Tourism Ministry will re-allow entry for tourist visa holders starting Aug. 1, it said in a statement. “Vaccinated tourists will be allowed to enter without having to be institutionally quarantined upon providing a negative Covid-19 PCR test and a vaccination certificate,” the ministry said. Accepted vaccines will be Pfizer, Astrazeneca, Moderna and Johnson & Johnson, the statement added.

WASHINGTON (Reuters) - U.S. lawmakers have put on hold a proposal to sell almost $1 billion of weapons to Nigeria over concerns about possible human rights abuses by the government, three sources familiar with the matter said on Thursday. The proposed sale of 12 AH-1 Cobra attack helicopters made by...

WASHINGTON (Reuters) - A bipartisan U.S. congressional commission has called on Hilton Worldwide not to allow its name to be associated with a hotel project on the site of a mosque bulldozed by authorities in China’s Xinjiang region, where Washington says minority Muslims have been victims of genocide. In a...

Vice President Kamala Harris released a sweeping strategy on Thursday to address the root causes of migration amid the recent surge in illegal U.S.-Mexico border crossings. The strategy promises more sustained efforts to address motivations for migration, including refocusing engagement with Central America. The White House also released a "Collaborative...

U.S. congressmen reach back into Cold War armory to respond to China

WASHINGTON (Reuters) - Democratic and Republican congressmen on Wednesday introduced a bill that aims to revive an arm of the old U.S. Cold War arsenal to improve understanding of China and potentially other strategic rivals of the United States. The House bill introduced by Democratic Representatives Joaquin Castro and Bill...

HANOI (Reuters) – U.S. Defense Secretary Lloyd Austin will on Thursday look to nudge forward security ties with Vietnam that have been slowly deepening as both countries watch China’s activities in the South China Sea with growing alarm. Despite growing military relations, more than four decades after the Vietnam War...

WASHINGTON, July 29 (Reuters) - President Joe Biden is calling for state, local and U.S. territorial governments to provide $100 payments for every newly vaccinated American to boost COVID-19 inoculation rates, the U.S. Treasury Department said on Thursday. The Treasury said in a statement that such incentives are an allowable...

Defense Secretary Lloyd Austin issued a warning toward China this week regarding aggression in the Pacific. Austin, who spoke at the International Institute for Strategic Studies in Singapore on Tuesday, said the United States "will not flinch when our interests are threatened," specifically referencing supporting Taiwan, but added that the U.S. is not seeking a "confrontation" with China.

Florida Congressmen: Time for the EU to Recognize Hezbollah as a Terrorist Organization

Biden is NOT ruling out fourth stimulus check – as $2,500 bonus money debunked

JOE Biden has not ruled out sending Americans a fourth stimulus check after bogus claims about a $2,500 payment emerged on social media. The slew of posts on Facebook claiming that the United States government will provide another round of stimulus relief at the end of July were all part of an elaborate hoax.

CHILLING ISIS-style "graduation" photos show Taliban fighters posing in what is believed to be stolen US military gear. The images suggest the group is "no longer a bunch of farmers in sandals" and has risen to become "an actual professional force", it has been claimed. The photos show the 313...

Is a fourth stimulus check off the table now? While there's still public support for additional relief aid -- including a petition calling for $2,000 extra per month -- Congress is keeping talk of another round of payments on the back burner this summer and there's nothing about another payment included in any of President Joe Biden's recent proposals. Signs of an economic rebound and the COVID-19 vaccine rollout could be factors, though it's still debatable how the recovery will play out.