Man sues 7 airlines including JetBlue, Southwest, and Delta, which he accuses of discriminating against travelers who can't wear masks because of medical conditions 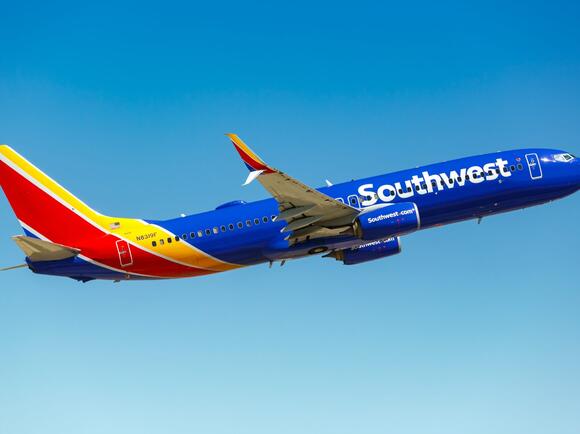 A frequent flier on Monday filed a lawsuit against seven airlines - Southwest, Alaska, Allegiant, Delta, Frontier, JetBlue, and Spirit - accusing them of discriminating against travelers who can't wear masks because of medical conditions.

Lucas Wall, of Washington DC, can't wear a mask because he has generalized anxiety disorder, according to a complaint filed in US District Court in Orlando, Florida.

He filed a similar complaint against government agencies, including the Centers for Disease Control & Prevention.

Federal mask mandates for travelers have been in place for months. Airlines have their own mask requirements. Transportation Secretary Pete Buttigieg in late May said mask mandates were still in place as a "matter of respect" for flight crews and others.

Wall said he's been stranded in his mother's retirement community in The Villages, Florida, because he can't fly without a mask. His court filings included medical paperwork detailing his diagnosis.

"I take medication for that, but I'm still prone to panic attacks," he said in a phone interview this week. "One of the triggers is any time my breathing is obstructed - that brings a feeling of claustrophobia and a complete sense of unease."

Wall bought tickets for eight flights this summer, according to his complaint. He requested a mask waiver on the airlines' websites. When he went to Orlando International for the first one, on June 2, he recorded his interactions with members of the Transportation Security Administration.

"To get in you need a mask," a TSA officer said in one video. After a back-and-forth with the TSA, airport officials, and Southwest employees, Wall missed his flight.

Wall said the airlines' requirements violate the Air Carrier Access Act, which protects passengers with disabilities from discrimination. He sought an emergency temporary restraining order, letting him travel without a mask.

JetBlue on Thursday filed in opposition to a temporary restraining order, saying Wall's complaint "is entirely without merit." Only the Department of Transportation can investigate or enforce ACAA regulations, the airline said in its filing.

"Plaintiff cites that he needs emergency relief from this Court because, otherwise, he will be 'stranded at [his] mother's house in the Villages,'" wrote JetBlue's lawyer, Suzanne E. Gilbert, of Holland & Knight LLP. "Plaintiff's procrastination is not an emergency."

Wall said he expected that initial defense, which amounted to "a government agency conspiring with the airlines" to ground travelers who can't wear masks.

A Delta spokesperson said via email: "While Delta has no specific comment on this complaint, the actions Delta began taking in 2020 to protect our people and customers during the pandemic are part of our long-standing commitment to a high standard of care as nothing is more important at Delta than safety."

It added: "Delta's mask-wearing requirement for customers and our people remains in place as does a federal mandate for mask-wearing across all modes of public transportation."

Wall said he's been comfortable in The Villages, but the arrival of summer means unbearable weather. He's desperate to get out to the Rocky Mountains - or anywhere else.

He said he's been to all 56 states and territories, and has visited 134 countries. He's planning to make it to every one.

He added: "I mean, you can also say as a 44-year-old living in a retirement community - as much as I love my mother - it's not the greatest place to be."

A group of men were arrested at a Florida airport after a fracas sparked by their refusal to wear masks inside a plane spilled over inside the terminal. The five men from New Jersey were on board the Spirit Airlines flight last Friday night when they were asked to leave the plane because of a "mask violation" inside the aircraft, Local 10 reported.

Spirit CEO urges employees, passengers to get Covid shots, but says the airline has no mandate

Spirit Airlines CEO Ted Christie told CNBC on Friday that he's urging all passengers and employees to get Covid shots. The low-cost carrier has no plans to implement vaccine requirements. The airline has seen leisure travel rebound “quite quickly,” Christie said. "We've had a very, very busy summer." Spirit Airlines...

Frontier unveils 20 new routes, including a direct flight from Denver to Central America

Frontier Airlines has announced the latest expansion of its route network including a nonstop flight connecting its home base of Denver to Belize City, Belize. The budget carrier will add 20 new flights to its network before the end of the year, according to this week’s announcement, 19 of which will fly out of airports in Florida.

Southwest Airlines has filed a lawsuit in Texas against online travel agency Skiplagged.com, saying the flight-search site does not have permission to display its airfares. It is the second such lawsuit filed by Southwest, which is also suing Kiwi.com, according to Business Insider. The airline said both Skiplagged and Kiwi.com...

An interesting case is brewing that pits Southwest Airlines against Skiplagged, the website that helps consumers compare fares and book hidden city ticketing in order to save money. What Is Hidden City Ticketing?. Hidden city ticketing, also called skiplagging as a testament to the growth of the Skiplagged website, is...

Two issues are at play here. First, is the mask mandate itself for three-year-olds. Second, is the inconsistent enforcement of it. Once again, another family was forced to step off a Southwest Airlines flight after their three-year-old son could not keep his mask on…but they flew again the next day and he wasn’t wearing a mask.

TSA defense training is returning after a long pause due to the pandemic. Flight attendants are taking the necessary training to protect themselves amid the numerous attacks we've seen in the air.

Flight attendants are brushing up on their fight skills as clashes with unruly passengers become more commonplace in the not-so-friendly skies. The Transportation Security Administration has relaunched self-defense courses for flight attendants — as airline workers report an increasing amount of unruly passengers, many of them angry about masking requirements.

As air travel demand increases, a vast majority of flight attendants say they have dealt with unruly passengers and nearly 1 in 5 experienced a physical incident, including shoving, kicking seats and harassing flight crews at airports, according to a survey of flight attendants released Thursday. The Assn. of Flight...

Where to buy N95, KN95 masks for traveling and to protect against Delta variant

Although those who have received the COVID-19 vaccine are no longer required to wear masks in many places, positive cases are surging because of the Delta variant. The variant now accounts for about 83% of all coronavirus cases in the U.S., mostly among the unvaccinated population. The surge in cases...

Southwest Airlines has booted another family from one of its flights because a three-year-old toddler would not wear a face mask despite the best efforts of his parents. Eric Hansen from the Bay Area says he and his wife decided to voluntary deplane and let the flight leave without them when they thought the flight attendants were calling the police on them for their toddler’s refusal to wear a face mask.

A family told KRON4 news that Southwest was inconsistent in its child mask policy because it was only enforced on some occasions.

75 Of The Funniest Announcements Made By Airline Employees

Pilots, flight attendants and other cabin crew have very important jobs to do, most of which have something to do, in some way, shape or form, with our safety. But that’s not to say all of these airline staff members are super serious. In fact, there’s probably little that would be further from the truth.

A visually impaired and legally blind man has filed a class-action lawsuit against American Airlines claiming its website discriminates against people with visual impairments and is in violation of the Americans with Disabilities Act because the site can’t be easily interpreted by screen readers. Alex Hernandez of Sonoma county filed...

The flight from Charlotte, North Carolina, to the Bahamas wasn't able to take off until the next morning.

Can this week get any worse for Fort Worth-based American Airlines?. The airline faced an onslaught of flight disruptions over the last seven days that included a passenger having to be restrained with duct tape after trying to disembark mid-flight, a plane full of travelers being told to put their hands on their hands for nearly 60 minutes because of an onboard security threat and a professional woman bodybuilder barred from a flight for wearing “inappropriate” clothing.

A budget airline customer who refused to mask up was hit with a massive $10,500 fine. The unidentified flier defied flight attendants who asked him seven times to wear his mask over his mouth and nose on a Feb. 27 Allegiant trip from Provo, Utah, to Mesa, Arizona, according to the FAA.