By Zachary Faria
Posted by
WashingtonExaminer
2021-06-18 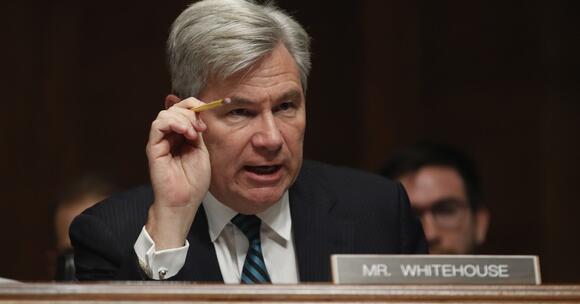 Rhode Island Sen. Sheldon Whitehouse admitted to what has been plainly clear for some time: Democrats attack the Supreme Court in order to try to influence its decisions. And he’s not going to give it up anytime soon.

Whitehouse, a rambling conspiracy theorist, asked now-Justice Amy Coney Barrett no questions during her confirmation hearing last year. Instead, he ranted about dark money while taking the same line of attack that every other Democrat did: Barrett was going to gut the Affordable Care Act, making her and Republicans evil people who were going to steal healthcare from the public during a pandemic.

It was always a dubious line of attack, and, of course, now the Supreme Court did not do it at all. Barrett was among the 7-2 majority in the case Whitehouse had been referring to, which held that the plaintiffs didn’t have the standing to sue. Conservatives had said from the beginning that this lawsuit was a long shot and that the court wasn’t likely to go along with it. No matter, though — not for Whitehouse, at least. He took credit on behalf of the Democratic Party for intimidating the court into protecting Obamacare.

Whitehouse said he didn’t regret his hysterics “not for a minute” and that the Supreme Court might have killed the law if not for Democrats' political crusading to corrupt a judicial decision.

Trying to intimidate the Supreme Court and influence its decisions has become a new calling card for the Democratic Party. Democrats have increasingly backed the idea of packing the Supreme Court in order to prevent their unconstitutional agenda from being struck down by justices who actually take their jobs seriously.

Whitehouse was also among the Democrats who threatened the Supreme Court in 2019, warning that "the Supreme Court is not well. And the people know it. Perhaps the court can heal itself before the public demands it be ‘restructured in order to reduce the influence of politics.’” That's a very unsubtle threat.

And who can forget Senate Majority Leader Chuck Schumer, apparently physically threatening justices by name last year over the issue of abortion? “I want to tell you, Gorsuch, I want to tell you, Kavanaugh: You have released the whirlwind, and you will pay the price,” Schumer said. “You won't know what hit you if you go forward with these awful decisions.”

Whitehouse seems to think this tactic works (and perhaps it does, at least with Chief Justice John Roberts). Democrats clearly are going to continue to try and intimidate justices going forward, as their agenda becomes more and more radical and continues to run up against the Constitution itself.

Immigration ‘amnesty’ could be career-ending vote for Senate Democrats: Poll

As the Senate, nudged along by West Virginia Sen. Joe Manchin, moves to include immigration for millions of illegal immigrants in an infrastructure bill, new polling shows it could be a career killer for several Democrats up for reelection next year.

Senate Republicans on Wednesday slammed Myrna Perez, one of President Joe Biden’s judicial nominees, for her history of advocacy against a series of Republican-sponsored election laws.

A federal judge denied the request of a group of seven lawyers, including Sidney Powell and Lin Wood, who petitioned through their legal counsel on Wednesday to release the footage of a Detroit sanctions hearing on Monday over concerns about misinformation.

(CNN) — New revelations about the paper-thin look the FBI took into Supreme Court Justice Brett Kavanaugh during his 2018 confirmation fight is a potent reminder that even the nation's highest court is now infected with partisan politics. Democrats reacted to the news -- which was not all that surprising...

Sen. Mike Lee is pressing the Supreme Court to reconsider its landmark abortion rulings and instead let states pass their own laws. If the justices were to side with him, it would trigger a now-dormant Utah law, banning all abortions except in cases of rape, incest and to protect the health of the mother.

With the Texas legislature immobilized, the next chapter that engulfed Republicans to rewrite voting laws may fall into the state's third branch of government.

Robert Thomas made a thorough observation on his Inverse Condemnation blog: Chief Justice Roberts is the Supreme Court's "property guy":. The biggest point we read between the lines of Chief Justice Roberts' opinion was this: the Chief is solidly the "property guy" on the Court. In addition to Cedar Point, how many of the Court's property or property-related opinions has he authored? Knick. Penn East. Horne II. Murr dissent. Winter. This recent per curiam sure reads a lot like he wrote it, too. [Pakdel v. City & County of San Francisco]. Those opinions he didn't author he played a big part in: the fifth vote in Koontz; presumably employing his role as Chief to organize unanimous or nearly unanimous decisions in Arkansas Game, Horne I, Brandt, Hawkes, and Sackett; and joining in very pro-property rights pluralities when there wasn't a majority. (Did we miss any?)

Justice Stephen Breyer remaining on the Supreme Court is a gamble

Last week, Supreme Court Justice Stephen Breyer disappointed many liberals by announcing that he doesn’t have any plans to step down from the high court at this time. The pressure from the left to get Breyer to resign so that President Joe Biden can nominate a successor in his first year was already overwhelming. Breyer’s comments to CNN’s Joan Biskupic kicked criticism from the left into overdrive: “a pathological disregard for other human beings,” Adam Serwer wrote. “[T]his is about ego,” Demand Justice’s Brian Fallon added. Or, as Imani Gandy put it: “What the hell, man?”

DES MOINES, Iowa – It was a line that you would expect to receive thunderous applause. Former Vice President Mike Pence, addressing a crowd of some 1,200 evangelical activists attending the annual leadership summit of the Family Leader, a top social conservative organization in the first-in-the-nation presidential caucus state of Iowa, touted the Trump administration's success in shifting the federal bench to the right.

Under the United States Constitution, one-third of the power of the federal government is placed in the hands of nine men and women, the Supreme Court. Those nine justices are chosen by a sitting president, confirmed by the U.S. Senate, and will serve for life unless they choose to resign. Most of us know that from eighth-grade civics. But after that, few know the workings of that formidable body.

Among the recently released U.S, Supreme Court decisions, the most widely criticized — and rightly so — was its ruling, in the case of Brnovich v. Democratic National Committee, that Arizona had the right to enact a law clearly intended to impede voting by that state’s minority populations. The most...

In an interview, Supreme Court Justice Stephen Breyer responded 'no'  when asked if he'd decided when he will leave the nation's highest court.

Former state Supreme Court Justice John Wallace Jr., who was refused tenure on the bench by former Republican Gov. Chris Christie, could soon occupy one of the most politically important roles in the state. Wallace is the Democrats’ pick to be the 13th, tie-breaking member of the congressional redistricting commission,...

For the first time in a generation, there are six conservative justices on the Supreme Court. In time, this sextet will incrementally push the Court to the right. Yet, three of them are already sounding an alarm. Twice this term, Justices Clarence Thomas, Samuel Alito and Neil Gorsuch warned that Justices Brett Kavanaugh and Amy Coney Barrett lack backbone.

WASHINGTON (Reuters) - Justice Amy Coney Barrett blazed her own path during her rookie term on the U.S. Supreme Court, helping a conservative majority prevail in major cases while at times defying expectations after critics last year tried to paint her as a right-wing zealot. Her record suggests she has...

In a note to U.S. District Judge Anna Brown, the jury raised questions about the impartiality of one of its members. Brown has sent a note back to the jury asking them for clarification. / Amelia Templeton / OPB. The Arizona Supreme Court last week unanimously ruled that trial judges...

Kavanaugh conspiracy? Demands to reopen investigation ignore both facts and the law

It appears Washington has another conspiracy to make this a long, hot summer. Indeed, the conspiracy du jour has all of the favorite elements: a corrupted FBI, a powerful protected person, buried evidence of possible crimes. If it sounds like a Russia investigation redux, think again. For years, Democrats in...

Attorneys for Christine Blasey Ford, whose sexual misconduct allegations against Supreme Court Justice Brett Kavanaugh became the center of his Senate confirmation hearings, on Friday accused the FBI of carrying out a “sham” investigation into the accusations. The strong criticism from attorneys Debra Katz and Lisa Banks came after Democratic...