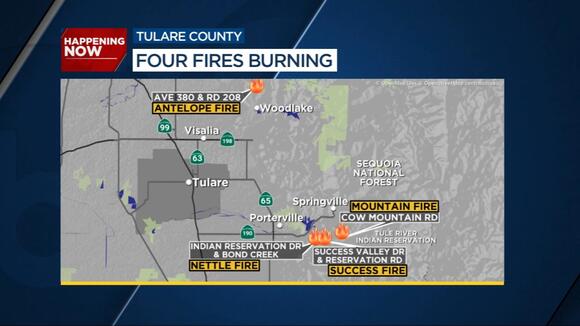 The first fire, named the Antelope Fire, was reported at Avenue 380 and Road 208 northeast of Woodlake, CAL FIRE said. So far, the flames have burned 11 acres and are 80% contained.

Another fire has scorched 800 acres east of Porterville on Success Valley Road and Reservation Road. Crews currently have it 90% contained. RELATED: Lightning flashes across sky in parts of Central CA; bolts spark some fires No structures appeared to be threatened by either wildland fires. Nettle Fire CAL FIRE firefighters were also helping the Tule River Indian Reservation fire crews battle the Nettle Fire off Indian Service Road BIA 70 and Bond Creek, which is located east of Porterville. The fire has grown to 600 acres and is just 5% contained.

Meanwhile, firefighters with the U.S. Forest Service were also battling fire sparked by dry lightning strikes overnight. The Mountain Fire grew to 105 acres above Cow Mountain Road in the western area of the Pier Fire burn area. The forest service has sent several crews and a helicopter to combat the flames. Containment grew to 35% overnight.

U.S. Forest officials say a giant sequoia was emitting smoke in the area where the Castle Fire burned last year. Crews have evaluated the tree and do not consider it to be a threat. Firefighters were monitoring it to put out hot spots. Officials have released details on the areas in Central California most at risk of fires this year. Graphic not displaying correctly? Click here to view in a new window.

The Park Fire is burning northeast of Springville off Balch Park Road and Bear Creek Drive.

Firefighters arrived and found large flames from a vacant house fire in the Exeter area had spread to three neighboring homes.

Madera County crews received reports of a woman who was hiking with her family when she slipped and plunged into the water.

2 people killed, 2 others injured in crash near Kerman

Two people were killed and two others injured after a crash near Kerman on Saturday night.

An intoxicated driver caused a deadly crash just outside Tulare that killed a teenager and left another with major injuries, the California Highway Patrol says.

Motorcyclist hospitalized after crash in Clovis

Clovis police say the rider was heading west on Shaw but lost control for unknown reasons at the Sunnyside intersection.

Flames scorched an abandoned Fresno building for the second time in the last two months.

Authorities are searching for a group of suspects who led Fresno County sheriff's deputies on a high-speed chase before crashing their car in central Fresno.

Kenneth Jackson was sentenced to 30 years in prison back in 2014 for setting 21 fires in 2013 in Yosemite Lakes Park.

More than a hundred volunteers rolled up their sleeves in east central Fresno on Saturday morning for the city's latest Love-A-Park event.

Valley farmers might face harshest ever water restrictions due to drought

California state water regulators are considering an emergency order that would cut a major source of water for thousands of Central Valley farmers.

With less than 8% of firefighters in the nation being women, the Fresno Fire department is hoping to spark change in the male-dominated profession.

Fire crews from multiple departments are working together to free people after a crash involving two semi-trucks near Orosi.

Police arrested a Corcoran Unified administrator for allegedly stealing more than $6,000 worth of equipment from the school district.

Death of contractor in Lemoore water tank explosion could have been prevented, city manager says

Lemoore city officials now say the tragic death of a contractor due to a water tank explosion could have been prevented.

A decades-old tradition returns to the Valley this weekend, as residents ride horses and march in memory of Joaquin Murrieta.

In Tulare County, the Board of Supervisors will follow state recommendations but said they are advocating for local districts to make masking decisions.

"Flatten the Curve" is exactly what interim health officer Dr. Rais Vohra says we once again need to do.

A motorcyclist has been hospitalized with major injuries after crashing with a van in central Fresno.

Tulare County deputies are investigating after a dead body was found in Earlimart Thursday afternoon.