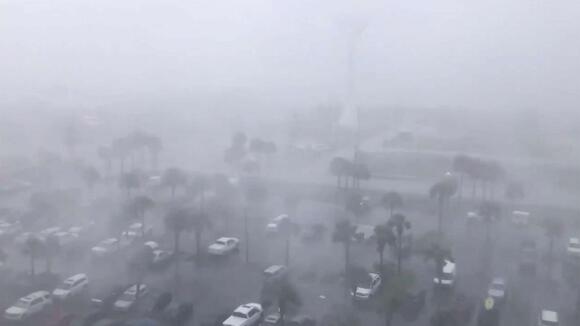 The storm brought heavy winds and severe weather from Louisiana to the Florida Panhandle.

Claudette is the third-named storm of the Atlantic hurricane season. The storm is waning as it moves farther inland moving NNE at 14mph centered about 80 miles NNW of Mobile, Alabama.

Claudette is hanging on as a minimal tropical storm with sustained winds of 40 mph.

Multiple reported tornadoes were reported over the last 12 hours near Pensacola, Florida, near Mobile and Brewton, Alabama, and Clay County Georiga, the worst of the damage so far reported in Brewton.

More than half a foot of rain is falling is parts of southeast Louisiana with up to 10 inches reported in Slidell, where police deployed 40 to 50 high-water rescue vehicles due to widespread flooding. In some areas, rainfall rates topped two inches per hour.

Fierce winds are also blowing through the Southeast, including several wind gusts topping 50 mph along the northern Gulf Coast from Grand Isle, Louisiana, to the Florida Panhandle since early Saturday. Several gusts topping 60mph were reported.

The National Hurricane Center warned of flash, urban and small stream flooding throughout the weekend along the central Gulf Coast.

As of Saturday afternoon, there are no alerts in effect for New Orleans and southeastern Louisiana. A tropical storm warning remains in effect for the Mississippi-Alabama state line and the Okaloosa and Walton County line in the Florida panhandle.

Flash flood warnings are in effect from southeastern Mississippi to Georgia and a tornado watch is in effect for parts of the Florida panhandle into southeastern Alabama and southwestern Georgia.

Claudette is forecast to weaken into a tropical depression soon and is projected to continue to sweep across the Southeast into Sunday.

On Sunday, the storm will impact the Carolinas. Claudette is expected to push off the North Carolina coast Monday morning and head out to sea.

MORE: Heat wave safety: What to know about heat stroke vs. heat exhaustion

Meanwhile, unprecedented record heat is still scorching the western half of the country from the Plains to California.

Omaha hit 105 degrees -- the first time the city reached that temperature in June since 1953.

MORE: How to conserve energy during a heat wave

Heat alerts remain in effect for roughly 30 million in the West as of Saturday, including Phoenix, Arizona; Las Vegas, Nevada; and Sacramento, California. The heat in the West may finally subside Sunday into Monday.

The Latest: Ark. has new high for hospitalizations for COVID

More wildfires possible in the West as fire conditions worsen

Fire conditions in the West are worsening this week, increasing the possibility of more blazes.

The United States is facing a COVID-19 surge this summer as the more contagious delta variant spreads.

Florida’s largest hospital systems are expanding their COVID units, limiting visitors and fearing staffing shortages as they deal with the statewide surge in cases

Housing courts around the country are expected to get busy starting Monday.

US hits 70% vaccination rate -- a month late, amid a surge

The U.S. finally reached President Joe Biden’s goal of getting at least one COVID-19 shot in the arms of 70% of American adults

US passes major vaccine milestone: 70% of adults now have at least 1 shot

The U.S. passed another milestone in its race to vaccinate all Americans as the delta varient continues to infect more people.