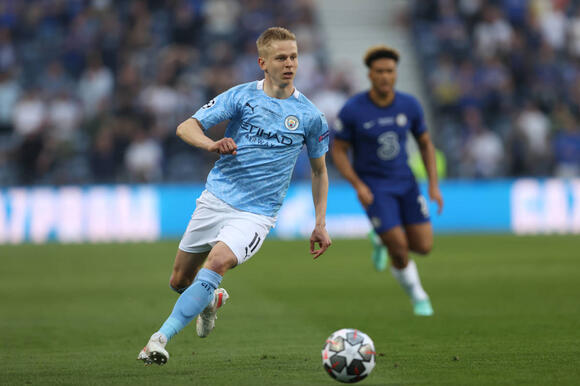 Left-back has become a somewhat plagued position for Pep Guardiola in recent seasons, with Oleksandr Zinchenko having found himself becoming first choice.

Impressive performances in the second-half of the campaign, most notably against Paris Saint-Germain in the Champions League semi-finals has propelled the Ukrainian, who cost just £1.7 million five years ago, to the Manchester City back-line.

According to Simon Bajkowski of the Manchester Evening News this week, the 24 year-old is set to start the new season as Pep Guardiola’s first choice left-back, as the club look to prioritise other positions in the summer transfer market.

Pep Guardiola is reportedly in the hunt for a new striker to replace Sergio Aguero as well as a new midfielder, with Aston Villa’s Jack Grealish and Tottenham’s Harry Kane both having been mooted over the past few weeks and months.

The reigning Premier League champions have also been heavily linked with 18 year-old left-back Nuno Mendes of Sporting Lisbon, as well as Fulham’s Antonee Robinson in recent weeks, with the former club reportedly demanding upwards of €60 million for the teenager's signature.

But according to the Manchester Evening News' report, Manchester City will not be making moves for a left-sided full-back who will cost a “significant amount”, seemingly ruling out potential moves for either of Mendes or Robinson in the next few weeks.

Although the option to sign a left-back remains, enough promise has reportedly been shown by both Joao Cancelo and Nathan Ake in the past season to not warrant Manchester City prioritising a new left-back in the summer transfer window.

Benjamin Mendy continues to be hampered by injury and there is “little chance” of Manchester City selling the Frenchman, who cost a staggering £52 million in 2017 this summer.

The Spaniard says the Barcelona star fits the profile of potential targets for the Premier League champions as they continue to prepare for 2021-22 Ferran Torres has addressed rumours linking Antoine Griezmann with Manchester City and described the French forward as a "great player". City are being tipped to add...

Chelsea offer Abraham swap in Haaland talks (Mirror) Trippier desperate for Premier League move (The Telegraph) The Colorado Rapids are nearing a deal to sell left-back Sam Vines to Royal Antwerp for up to $2 million with add-on incentives and a sell-on clause, reports The Athletic. The 22-year-old has emerged...

The 17-year-old has been a regular for Manchester City’s under-23 and under-18 squads and has played a crucial role in their Premier League 2 and the Under-18 Premier League title triumphs. Doyle has been a part of the City Football Academy setup since 2014 and has risen through the ranks...

Due to the delayed start to last season, the semi-finals were determined in a one-off fixture, with Manchester City claiming a 2-0 victory over Manchester United at Old Trafford. This was on their way to clinching a fourth consecutive Carabao Cup, beating Tottenham Hotspur at Wembley Stadium in the showpiece...

He may not have been able to drag Poland to the latter stages of Euro 2020 , but Robert Lewandowski is still coming off the back of a record-breaking season. Given that Poland went out at the group stage after defeats to Slovakia and Sweden and a draw against Spain, his three-goal haul at the tournament wasn’t too shabby. His main successes came with Bayern Munich , however, where he had one of his most impressive campaigns to date.

The 30 year-old winger has reached a point in his Manchester City career where he now has two years remaining on his existing deal - meaning he is now at a point where he should be discussing talks over his future with the club. While there is understandably no rush...

The Blues are determined to freshen up their attacking outlets after a disappointing end to their 2020/21 campaign, as they suffered a gut-wrenching 1-0 defeat to Chelsea in the Champions League final. Though the arrival of a world-class striker may be fuelled by the departure of a few first-team stars...

The Brazilian has struggled to make a significant impact in Manchester since his transfer from Palmeiras in the January of 2017. Despite scoring his 100th Premier League goal against Everton on the final day of last season, Gabriel Jesus has played second fiddle to the clubs all-time top goalscorer, Sergio Agüero since his arrival.