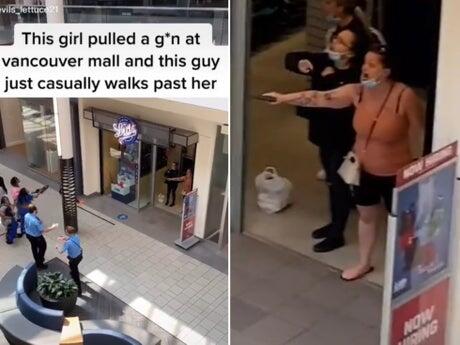 A TikToker has captured the moment where a white woman pulled a gun on a group of Black girls in a shopping mall.

The white woman can be seen arguing with the group of Black teens outside a Lids hat store at the Vancouver Mall, in Vancouver, Washington .

Both sides appear angry and animated while unintelligible shouting can be heard.

But, as the bystander Theo zooms in on the commotion, the white woman can be seen pointing a gun at the group.

Mall security are on the scene and can been seen attempting to de-escalate the dispute. Yet they fail to retrieve the gun from the woman.

It appears that one passerby was unfazed by the gun, and can be seen walking past the gunwoman to go into the Lids hat store.

TikToker Theo captioned the clip: “This girl pulled a gun at vancouver mall and this guy just casually walks past her.”

The video has since gone viral with over 8.6m views and likes, with people outraged at the scene.

You can watch the TikTok in full here.

One person said: “Why are the cops not stopping her instead of the other girls?”

Someone else added: “Can we talk about the cops not restraining the person with a gun but are literally hovering over the other women.”

“I love how the cops are doing nothing but let it be the other way around...” A fourth person replied.

Others jokingly commented on how unbothered the customer was who walked past the gunwoman.

One person said: “He really said that ain’t my problem.”

“Bro was late for work,” another person wrote.

Someone else replied: “When your boss tells you that you’re fired if you’re late from break one more time.”

Meanwhile, another video of the incident from a different angle was also being shared to Twitter.

In this footage, the woman with the gun can still be seen pointing her weapon as she leaves the Lids hat store with what appears to be her kids.

Unintelligible shouting can still be heard.

At one point, the children dangerously walk in front of the gun as they leave the shopping mall .

A spokesperson for the Vancouver Police Department told Newsweek that no one was injured in the argument and the woman’s gun was determined to be unloaded during the incident.

An apparent cinema employee has gone viral on TikTok after revealing a major secret about the sizes of popcorn you can buy at the movie theatre.TikToker @thatcoolguy.25597 revealed that people who have purchased the medium sized popcorn may have been scammed as the small and medium actually contain the same amount of popcorn.In the viral clip, which has been viewed 6.3 million times, the TikTok user pretends to be a customer ordering the cinema snack.Then, the concessions worker shows the customer the sizes – a large bucket, a regular bucket (medium) and a junior bag (small). ...

A TikTok user has documented the horrifying moment he claimed to find multiple mealworms in an unopened bag of cereal.In a disturbing video, TikTok user @mbutler20014 shared a video captioned “found a whole family in my cereal”.He explained that he had just bought a box of Kellogg’s Frosted Mini Wheats cereal and kept hearing noises coming from it, saying, “Yo, I can for real hear something in this box”.He held the camera close to the box in an attempt to pick up some of the noises that he was hearing. Then, he proceeded to open the box and pull out...

A 68-year-old man from Texas has been arrested for animal cruelty after he abandoned his pet husky on the side of the road.The heartbreaking video was filmed by a fellow dog rescuer and has since gone viral across social media platforms, with one clip reaching 1.2 million views.It shows a man on the side of a road in Horizon City, a suburb of El Paso, while the driver sits waiting in the SUV. He is seen removing the leash from his pooch before getting back in the car, leaving his husky behind. In a heart-wrenching moment, the abandoned dog can...

Police in New York City are appealing for help following a violent robbery in which a victim was knocked unconscious by a hooded figure, who ran from the scene.The incident took place on Saturday morning in the Cypress Hills area of Brooklyn, and south of Highland Park, according to the the New York Police Department.CCTV footage released by the Crime Stoppers unit on Saturday shows a man in a grey hoodie violently punching a victim who appeared to have been thrown from his Citi bike, which could be seen by his side. The robber continued punching the victim, who...