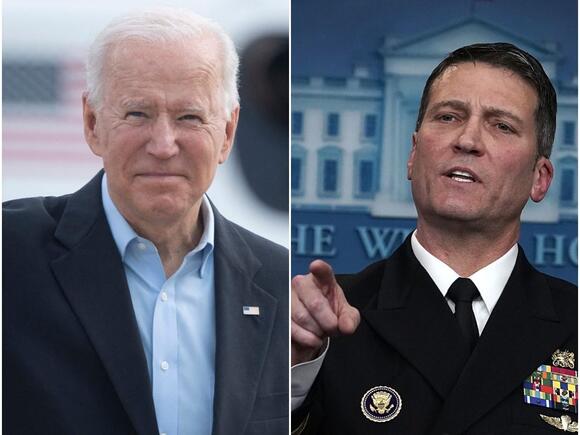 Rep. Ronny Jackson of Texas, who previously served as the White House physician under both Donald Trump and Barack Obama , is calling on President Joe Biden to take a cognitive test to prove he's fit to run the country.

Jackson told Fox News' Sean Hannity on Thursday that he was circulating a letter among House GOP colleagues because he believed Biden was "not physically or cognitively fit to be our president right now."

"We can't sit on this any longer," Jackson told Hannity on Thursday, according to Fox News . "We need to know that we can trust our president, and we need to know that he's in charge of what's going on and someone else isn't pulling the strings behind the scenes. Because that's what it looks like now."

Read more: The top Trump fundraiser who helped plan his January 6 rally is out of Trumpworld

The Texas congressman later took to Twitter to say he sent the letter to Biden; the current White House physician, Kevin O'Connor; and Dr. Anthony Fauci, who is Biden's chief medical advisor.

Biden, 78, made history this year by becoming the nation's oldest president.

White House officials said last month the president was scheduled to take an annual physical exam "later this year" and would make the results publicly available, according to The Hill .

Jackson later made headlines for an interview in which he said he would mix cauliflower into Trump's mashed potatoes in a sneaky attempt to get him to eat more vegetables.

In March, a report by the Pentagon's inspector general concluded that Jackson while serving in the White House made sexual remarks about a female junior employee, verbally abused subordinates, and drank on the job.

Jackson, who now represents Texas' 13th Congressional District in Congress, was one of 14 House Republicans who voted against legislation this week to establish Juneteenth as a federal holiday commemorating the end of slavery in the US. Biden signed the legislation into law on Thursday.

Everybody knows President Biden has a speaking problem. It used to be one rooted in gaffes. “Oh, that’s just Joe” was the standard line of explanation from his defenders on occasions that ranged from his blurting of racial insensitivities to his characterization of high I.Q. in the face of outed serial plagiarism.

Miranda Devine: Why Nancy Pelosi's days as Speaker of the House are numbered

Nancy Pelosi used to point her angry finger at Donald Trump, but she leaves him in the dust when it comes to busting norms, dividing Congress and causing mayhem. If anyone is to blame for the hyper-partisanship in Washington these days, it’s the spiteful House speaker. She behaves more like...

President Joe Biden met with Iraqi Prime Minister Mustafa al Kadhimi at the White House on Monday. It wasn't just any leader-to-leader meeting. Biden announced that the United States would soon end its combat mission in Iraq. The move comes just a few months short of the 10th anniversary of America’s last withdrawal from Iraq.

President Joe Biden has not been arrested – he's made public appearances since the Facebook video was published. The video's claim is false.

Biden 11th Most Popular President While Trump Ranks No. 20: Poll

The results of a recent poll asking American's to rate United States presidents according to their opinion show current President Joe Biden in 11th place and former President Donald Trump in 20th. The American division of YouGov, an international research and analytics firm, conducted a survey among 3000 adult U.S....

(CNN) — Did you know that Joe Biden is probably going to resign as president sometime in the next month? Maybe, specifically, on August 13? While that's totally ridiculous -- Biden isn't resigning and, in fact, all signs point to him running for a second term in 2024 -- talk of Biden resigning has taken off among some of former President Donald Trump's most prominent supporters of late.

(CNN) — Donald Trump has set a pretty high bar for himself when it comes to wild rants. And yet, over the weekend in a speech to Turning Point Action in Arizona, he managed to outdo himself. Words -- or at least my words -- can't do it justice. So,...

Polls and surveys come and go very quickly in the media marketplace. Some get news coverage, some don’t; the press can be very selective at times. A new ABC News/Ipsos poll that revealed dwindling approval of President Biden is one of those surveys which got the coverage, even among news organizations that tend to shield Democratic officials.

Representative Marjorie Taylor Greene has said that "history" proves that Democratic President Joe Biden is leading a "communist takeover" of the United States. "It's a communist regime. It's been a communist takeover of our country, and it happened on January 21. And that is who Joe Biden is," the Georgia Republican said during an interview on Steve Bannon's War Room. Bannon's program airs on Real America's Voice, a right-leaning media network.

Longtime GOP pollster Frank Luntz, who is working unofficially with the Biden administration, tells CNN’s Anderson Cooper the one thing the President must do to combat vaccine hesitancy is to invite Donald Trump to the White House.

It might seem like a post-Trump world, but in red states across the US his most hardline supporters are setting the political agenda. How much power do they have to shape the country’s future, even with a Democrat in the White House?. Presented by Rachel Humphreys with David Smith; produced...

The Justice Department formally declined to assert executive privilege for potential testimony of at least some witnesses related to the January 6 Capitol attack, a person briefed on the matter said.

Trump's rough day hints at limits of his power over GOP

WASHINGTON — For someone his political party still can’t quit, Donald Trump sure had a rough day on Tuesday. The House’s Jan. 6 committee heard testimony from the Capitol police who fought with rioters on that day, with excommunicated Republican Reps. Liz Cheney, R-Wyo., and Adam Kinzinger, R-Il., taking starring roles on the committee.

From Hunter Biden to COVID-19 cases, White House is tripped up on transparency

President Joe Biden's promise to head the most transparent administration if he won the election is proving to be harder for him to keep now that he is in the White House.

Longtime Rep. Kevin Brady said that the Democratic agenda under President Joe Biden is far more extreme than when Barack Obama was president.

At an emotional first hearing for the House select committee to investigate the 6 January attack on the US Capitol, several members made clear they will go full-throttle to gather all the facts about what happened that day and leading up to it, political considerations be damned. Their determination is...

President Biden on Wednesday mistakenly uttered the name of his predecessor — “President Trump” — chalking it up to a “Freudian slip” even though he was talking about his longtime boss Barack Obama. Biden meant to refer to Obama, under whom he served for eight years as vice president, when...