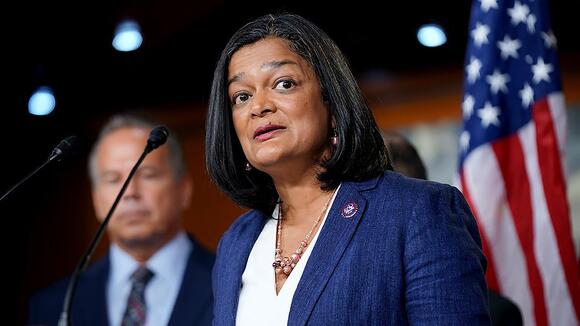 The public option insurance plan has fallen off the national radar, despite being a major point of contention between moderates and progressives just a year ago during President Biden 's campaign.

But rather than holding Biden’s feet to the fire on the issue, progressives are concentrating on other health care priorities, like ensuring drug pricing reform and expanded Medicare are included in a massive infrastructure package.

"That's where we are going to focus our attention at this moment. That doesn't mean we've given up on the rest of the pieces. But I do think at this moment what we can immediately do is lower the Medicare eligibility age, add benefits and address prescription drug pricing," Jayapal said.

Biden's time in office has been consumed primarily with responding to the coronavirus pandemic, and the window to enact other parts of his ambitious agenda, like infrastructure, is now rapidly closing.

Outside advocates and Democrats say they haven't given up on pursuing a government-run health care plan, but there's an acknowledgement that a lot of legislative legwork is needed on that front.

Last month, Sen. Patty Murray (D-Wash.) and Rep. Frank Pallone Jr. (D-N.J.), who are in charge of health committees in their respective chambers, announced their intention to craft a public option bill.

Their process is just getting started, and there are numerous competing ideas on what a public option should look like at the national level. Pallone and Murray asked for feedback from key stakeholder groups, as well as the general public, on some of the most basic but thorny questions.

Frederick Isasi, executive director of the liberal advocacy group Families USA, said that while a public option remains important, he wants to focus on items that might be able to pass quickly.

"The No. 1 question for us is what can we get done to move the ball forward? Our window for doing that congressionally is not very long. It's a matter of a few more months to tee things up before we hit next year's cycle," Isasi said.

"The most important question is what is achievable, what is real, and significant? This is not the drawing board phase for the things that will be happening this year," he added.

"I think it's definitely more a conversation about drug pricing right now than about a public option. The personnel decides, and the Speaker decides. If this is an immediate issue, it will be," she told The Hill.

Former President Obama abandoned the public option when drafting the Affordable Care Act (ACA) in order to secure the needed votes from moderate Democrats, to the outrage of progressives.

Biden campaigned on creating a public option, touting it as a way to reduce costs without completely ending private insurance, in contrast to "Medicare for All." The Medicare-like government insurance plan backed by Biden would be sold on ObamaCare’s marketplaces.

Biden said his proposal would cost $800 billion, as opposed to the estimated $32 trillion to enact Medicare for All.

But while the president's $6 trillion budget unveiled last month expressed support for creating a public option, it was not included in the funding request.

"I think you have to, you have to choose your battles, and I don't quibble with the fact that the administration made the decision to prioritize COVID relief and infrastructure. I think that's probably the right way to go," Sen. Chris Murphy (D-Conn.) told The Hill.

Murphy said without a push from the White House, it may be difficult to build momentum behind a public option, especially since most of the health care industry opposes any kind of government-run insurance plan.

Health care companies argue a public option would not reimburse providers enough, and would pull customers away from traditional insurance plans by offering cheaper premiums.

Still, Murphy said he thinks it would be easier to sell Americans on the benefits of a public option than it was to promote ObamaCare.

"The ACA was hard to understand. It was complicated. Worthwhile, but complicated. A public option — everybody should have the ability to buy a Medicare plan if they want. It's really easy to message," Murphy said.

House and Senate Democrats are currently eyeing a $6 trillion reconciliation proposal that would advance Biden's infrastructure agenda and include lowering Medicare's eligibility age to 60, broadening the program’s benefits to include vision, dental and hearing, and reducing the cost of prescription drugs.

"Most of the progressives believe that ultimately we should have a strengthened Medicare for All, and the steps that will get us there are the most important. And that's why you see us prioritize the expansion of Medicare and the strengthening of Medicare," said Rep. Ro Khanna (D-Calif.).

"Though we would vote for a public option," Khanna added.

Ten Republican senators at this writing support a bipartisan infrastructure outline. So does a like number of Democrats, including the party’s two main centrists, Sens. Joe Manchin and Kyrsten Sinema. That means if recalcitrant liberals can be kept in line, no sure bet, there are potentially enough votes for a resulting bill to overcome a filibuster.

Biden: Pathway to citizenship in reconciliation package 'remains to be seen'

President Biden on Sunday said it “remains to be seen” if a pathway to citizenship will be included in the Democrats’ forthcoming reconciliation package. Biden, upon arriving back at the White House over the weekend, answered a question about whether a pathway to citizenship needs to be in the reconciliation bill, telling reporters that “there needs to be a pathway for citizenship; whether it can be in immigration remains to be seen,” according to a pool report.

New York Times reporter Katie Benner suggested on Tuesday that in order to tackle America's current national security "dilemma," Trump supporters should be considered "enemies of the state." As the first hearing of the Jan. 6 committee was underway on Capitol Hill, Benner took to Twitter to stress that it...

President Biden and Sen. Kyrsten Sinema (D-Ariz.) met at the White House on Tuesday to discuss the stalled bipartisan infrastructure framework. The sit-down signals a desire by Biden to get directly involved in the negotiations as lawmakers and White House officials try to finalize details of a $1.2 trillion infrastructure deal amid ongoing disagreements.

TALLAHASSEE — Florida’s Covid crisis has wedged Gov. Ron DeSantis between two competing forces: public health experts who urge him to do more and anti-vaxxers who want him to do less. The Republican governor has come under attack from the medical community and Democrats as the Delta strain of Covid-19...

After spending the weekend negotiating, lawmakers have yet to clinch a bipartisan infrastructure deal, a precarious sign for senators who have months trying to cement a massive, bipartisan win for President Joe Biden.

Joe Biden is extremely confused about inflation. Not a joke, as the not-funny president so frequently (and oddly) says. At a recent CNN Town Hall, President Biden once again dismissed rising prices as a temporary hiccup in his otherwise brilliant recovery plan, regurgitating the notion that the surge is temporary, and not a threat to the economy.

On The Money: Democrats reach deal on $3.5T target | Biden rallies Democrats: 'We're going to get this done'

Happy Wednesday and welcome back to On The Money, where we’re probably going to be avoiding flights for a while. I’m Sylvan Lane, and here’s your nightly guide to everything affecting your bills, bank account and bottom line. See something I missed? Let me know at slane@thehill.com or tweet me...

Happy Tuesday and welcome back to On The Money, which is about 5.4 percent longer than normal today. I’m Sylvan Lane, and here’s your nightly guide to everything affecting your bills, bank account and bottom line. See something I missed? Let me know at slane@thehill.com or tweet me @SylvanLane. And...

Conservative talk radio host Mark Levin is urging people in the United States to not buy goods and services from businesses he says have a "woke" political agenda. “The time to act is now,” Levin writes in his latest book, "American Marxism," released Tuesday, according to the Washington Examiner. “Each...

(CNN) — George P. Bush wanted Donald Trump's endorsement badly. Or, at a minimum, he wanted the former president to stay out of his primary challenge to Texas Attorney General Ken Paxton. To make that happen, George P. Bush kissed up to Trump in the most obsequious -- and embarrassing...

CNN’s Lemon doesn’t back down after Trump criticism

NEW YORK (AP) — CNN’s Don Lemon did not back down despite criticism from President Donald Trump, twice labeling presidential remarks as racist while he was moderating Wednesday’s Democratic debate. Lemon, with partners Jake Tapper and Dana Bash, presided over a session with questions designed to highlight differences between the...

Marjorie Taylor Greene, Matt Gaetz and others drowned out by protesting brass band

Protesters drowned out US Reps Matt Gaetz, Marjorie Taylor Greene and other Republican members of Congress. The lawmakers, who were addressing the media about the treatment of suspected rioters imprisoned awaiting trial for their actions on 6 January, fled the news conference surrounded by security as protesters screamed at Mr Gaetz, calling him a "pedophile", and accusing the group of committing treason with their statements in support of the rioters.

Iowa Sen. Liz Mathis, D-Hiawatha, is running to represent Iowa’s 1st Congressional District in the U.S. House of Representatives. In her announcement video released on Tuesday morning, Mathis said people in her community are concerned about the level of conflict in politics, the direction the country is headed, and if elected officials are putting Iowa first.