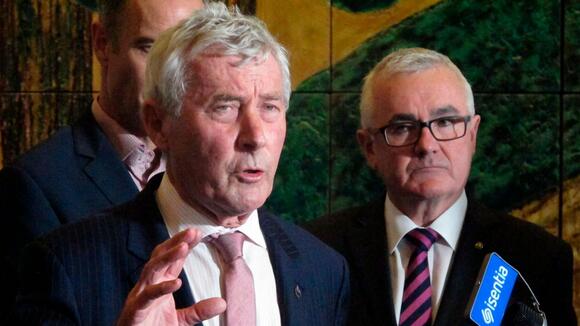 A former Australia n spy was released from court on Friday with a three-month suspended prison sentence over his attempt to help East Timor prove that Australia spied on the fledgling nation during multibillion-dollar oil and gas negotiations.

The former spy, publicly known as Witness K, and his lawyer, Bernard Collaery, had been charged in 2018 with conspiring to reveal secret information to the East Timorese government.

Former East Timor President and Prime Minister José Ramos-Horta is among leaders of the impoverished half-island nation of 1.5 million to urge Australia to drop the persecutions.

K pleaded guilty on Thursday at the beginning of a two-day sentencing hearing in the Australian Capital Territory Magistrates Court. The public and media were excluded when classified evidence was discussed.

Magistrate Glenn Theakston sentenced K to three months in prison fully suspended. K, who was hidden behind black screens in the courtroom throughout the hearing, must also pay a 1,000 Australian dollar ($840) security bond to be of good behavior for 12 months.

K had faced up to two years in prison. The maximum has been increased since his offense to 10 years as Australia tightens controls on secrecy.

The Australian government has refused to comment on allegations that K led an Australian Secret Intelligence Service operation that bugged government offices in the East Timorese capital, Dili, in 2004 during negotiations on the sharing of oil and gas revenue from the seabed that separates the two countries.

The government canceled K’s passport before he was to testify at the Permanent Court of Arbitration in The Hague in 2014 in support of East Timor’s challenge to the validity of the 2006 treaty.

The East Timorese argued that the treaty was invalid because Australia had failed to negotiate in good faith by engaging in espionage.

There was no evidence heard in open court of a bugging operation, which media had reported was conducted under the guise of a foreign aid program.

But K and Collaery had prepared for the East Timorese government two affidavits that identified K as a former ASIS member and details of ASIS functions.

Theakston noted that the case was unusual because K’s offense was committed “in plain sight of Australian authorities.”

“That suggests to me it was brazen and indifferent or mistaken,” Theakston said.

Theakston said it was open to him to find K had made a mistake rather than a deliberate breach “based on a perception of justice.”

The judge described K as an “elderly man” more than 70 years old who had had the threat of prison hanging over him for eight years.

The ASIS secrecy rules were “strict and absolute” for serving and former officers, Theakston said.

Defense lawyer Robert Richter said “Mr. K” had suffered from not being able to travel overseas with his wife because of the loss of his passport.

Richter blamed K’s post-traumatic stress disorder, clinical depression and anxiety for his offense. He argued for K to escape a conviction being recorded for “reasons that will be made clear in closed court.”

Collaery has pleaded not guilty and wants to fight the charge in an Australian Capital Territory Supreme Court trial without media or the public being excluded.

Collaery was allowed to sit in the public gallery of K's hearing during the closed and open hearings. Collaery declined to comment on the sentence.

Prosecutor Richard Maidment declined to comment on the result.

Australia and East Timor agreed on a new maritime border treaty in 2018. A year later, the Australian prime minister arrived in Dili to formalize the agreement and was targeted by street protests demanding charges against K and Collaery be dropped.

Australian two-time medal winning Olympian Nathan Baggaley has missed another chance at Olympic glory after a botched plot to smuggle cocaine landed the athlete in jail. The former kayaking world champion and Olympic silver medallist was jailed for 25 years (with a non-parole period of 16 years) by an Australian court over a failed plan to smuggle up to $200 million ($US 147 million) worth of cocaine into the island nation.

JAKARTA, July 15 (Reuters) - Former Indonesian maritime affairs and fisheries minister Edhy Prabowo was sentenced by a court on Thursday to five years in prison for accepting bribes in a corruption scandal involving the export of lobster larvae. Edhy, who is a politician from the Gerindra party, was arrested...

An Olympic medal-winning kayaker and his younger brother will be in prison for more than 20 years after they were found guilty for attempting to smuggle millions of dollars worth of cocaine into Australia, according to reports. The two-time silver-winning medalist Nathan Baggaley, 45, who won at the 2004 Athens...

SYDNEY — A Sydney civil engineer has been jailed for three years and six months for brokering deals to help North Korea export arms in breach of global sanctions. However, Chan Han Choi will remain free, having already served the full term while on remand after his arrest in 2017. The 62-year-old pleaded guilty to contravening a United Nations sanction enforcement law for […]

Pegasus scandal: Are we all becoming unknowing spies?

The allegations that spy software known as Pegasus may have been used to carry out surveillance on journalists, activists - and even perhaps political leaders - highlights that surveillance is now for sale. The company behind the tool, NSO Group, has denied the allegations and says its customers are carefully...

HONG KONG — (AP) — The first person to be tried under Hong Kong’s sweeping national security law was found guilty of secessionism and terrorism on Tuesday in a ruling condemned by human rights activists. The Hong Kong High Court handed down the verdict in the case of Tong Ying-kit,...

Woman Mortified After Being Told To Cover Up On Flight

An Air New Zealand passenger was left stunned after she was urged to “cover up” when boarding a flight. Courtney Newbold was boarding a plane heading from Rarotonga in the Cook Islands to Auckland, before being informed by two separate flight attendants that her outfit was inappropriate. Courtney has since...

Nathan Baggaley, who won two silver medals at the 2004 Athens Olympics, was arrested in 2018 alongside his brother, Dru.

After attempting to smuggle millions of dollars in cash, a ‘Kim Kardashian lookalike’ was arrested and sentenced to prison.

‘Kim Kardashian Lookalike’ Jailed After Trying to Smuggle Millions In Cash. A British woman was sentenced to prison after being found trying to smuggle millions of pounds out of the country in luggage. Tara Hanlon, 30, was stopped from boarding an aircraft from London to Dubai in October of last...

Chinese diplomats were left furious after a photo was published of gold-medal winning weightlifter Zhihui Hou.The embassy blasted Reuters as “ugly” and labelled the photo of Hou competing on her way to gold in the women’s 49-kg weightlifting as “shameless”.Follow Tokyo Olympics 2021: Latest medals and updatesA statement from the Chinese embassy of Sri Lanka read: “Among all the photos of the game, Reuters has chosen this one, which only shows how ugly they are.“Don’t put politics and ideologies above sports, and call yourself an unbiased media organisation. Shameless. Respect the spirit of Olympics.”The photo in question is an...

The COVID-19 pandemic has affected our lives in countless ways, but while it may have seemed like things were starting to turn in the right direction at the beginning of the summer, unfortunately, the surge of new cases brought on by the Delta variant has changed that. Now, previously removed restrictions are being put in place once again. Some local health departments have begun suggesting that even vaccinated people should be wearing masks indoors, and in a major decision that could have a serious impact on your vacation plans, both the Centers for Disease Control and Prevention (CDC) and the State Department have warned Americans not to go to certain countries where the Delta variant is surging, Reuters reports.

Ex-Nurse Who Calls COVID-19 Doctors “Nazis” Believes the Devil is Orchestrating Pandemic; Son Says She is “Beyond Help”

Former nurse Kate Shemirani is in hot water after giving a highly controversial speech at a recent anti-lockdown rally in the United Kingdom, during which she compared doctors giving out the COVID-19 vaccine to Nazi doctors that were later hanged for their crimes. Her critics say the speech was a...

COVID-19 live updates: Dozens of cases across US linked to Christian summer camp

A pandemic of the novel coronavirus has now infected more than 195 million people worldwide and killed over 4.1 million of them.

The Athletics Federation of Nigeria took full responsibility for the mishap, while 10 athletes from five other countries have also been ruled out.