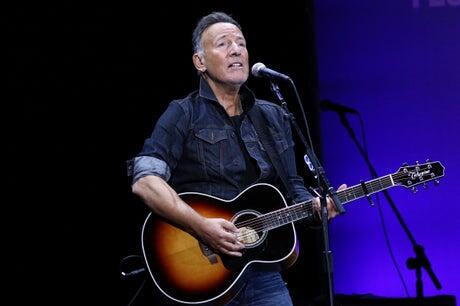 Bruce Springsteen fans who have had the AstraZeneca vaccine will be turned away from his comeback shows on Broadway , it has been announced.

The musician is returning with a five-night run at the St James theatre in New York on Saturday 26 June, with additional performances scheduled for September. Tickets went on sale on 10 June.

A notice on Springsteen’s official website says audience members are required to provide proof of full Covid-19 vaccination in order to enter the theatre.

However, a link to further information states that guests need to be fully vaccinated with an FDA-approved [Food and Drug Administration] vaccine, per the rules for New York State.

A statement reads: “At the direction of New York State, Springsteen on Broadway and the St James Theatre will only be accepting proof of FDA-approved Covid-19 vaccines (Pfizer, Moderna, Johnson & Johnson).

The definition of “fully vaccinated” means it must have been 14 days since guests received their second dose of the Pfizer or Moderna vaccines, or 14 days after the single dose of the Johnson & Johnson jab.

AstraZeneca has not yet been approved by the FDA because the organisation has requested that it be shown results from a large-scale trial.

The news will come as a blow to Springsteen’s Canadian fans, with more than 1.7 million people having already received the AstraZeneca vaccine.

A headline in the Toronto Star newspaper read “Burn in the USA” and added: “The show must go on. But if you got the AstraZeneca vaccine, you’re not invited.”

The NHS says the Oxford-developed AstraZeneca vaccine is “safe and tested and will protect you against serious illness from Covid-19”.

Springsteen on Broadway is based on the musician’s bestselling autobiography Born to Run, and invites fans to join him as he performs songs on the piano and on guitar, and recalls personal stories from his life.

“I loved doing Springsteen on Broadway and I’m thrilled to have been asked to reprise the show as part of the reopening of Broadway,” Springsteen said in a statement.

Proceeds from the opening night will be donated to a group of local New York and New Jersey charities.

After 46 years, Bruce Springsteen is correcting this one lyric

Nearly half a century after the release of Bruce Springsteen’s iconic track Thunder Road, one lyric has officially been changed. The song opens Springsteen’s Born to Run, and when pressed in 1975, was said to begin with the line: “The screen door slams, Mary’s dress waves“. But a debate has...

For years, Bruce Springsteen fans have argued over a single word: In the 1975 song “Thunder Road,” does Mary’s dress wave or sway?. The official lyrics have long said the former. Many fans swear they hear the latter. Now, Springsteen’s longtime manager Jon Landau, a producer of the song as...

BRUCE Springsteen and his wife Patti Scialfa have been married for three decades. Bruce and Patti's daughter Jessica is set to head to the Tokyo Olympics this year. Vivienne Patricia "Patti" Scialfa is an American singer-songwriter and guitarist. Scialfa has been a member of the E Street Band since 1984.

Bruce Springsteen has turned down an offer to have a New Jersey rest stop named after him. The ‘Born To Run’ legend was approached by the New Jersey Turnpike Authority to have his name on a rest stop alongside the likes of Jon Bon Jovi, James Gandolfini, Whitney Houston and Frank Sinatra.

When rock photographer Janet Macoska began working on her new photo book, Bruce Springsteen: Live in the Heartland, during the pandemic, she came across images of The Boss she'd never seen before. "I did a deep dive into my negatives and found images that I had never printed—that I probably never even looked at," says Macoska, whose work has been featured in publications like Rolling Stone and the New York Times. "Because the way we worked back in the day, I was shooting shows every night." Even more surprising? Macoska realized that Bruce Springsteen was the first rock star she ever photographed. That night at the Allen Theatre in Cleveland, Ohio in 1974, Macoska was on assignment for her college newspaper and Springsteen, then 24 years old, wasn't even the headliner. "This little straggly guy comes along, Bruce Springsteen, who was a bundle of energy and really charismatic," says Macoska, who would go on to capture the rocker on stage in the decades after. (She's shared some never-before-published photos featured in her photo book with PEOPLE, as well as some iconic shots.) "I have 12 pictures on the roll," she continues, "but I used six or seven of them on Bruce, and the rest on the headliner, because I had to."

The long mystery over the lyrics of Bruce Springsteen's 1975 Born To Run opener has finally been put to rest, according to Rolling Stone. Back on July 3rd, noted New York Times journalist Maggie Haberman was waiting for “The Boss” to begin that night's Springsteen On Broadway appearance she tweeted the opening line to the classic, posting: “A screen door slams, Mary’s dress sways.” Before long, Springsteen die-hards were both condemning or defending the tweet — with many slagging Haberman for incorrectly stating the dress actually “sways” rather than “waves.”

When Bruce Springsteen First Heard Himself on the Radio

Bruce Springsteen recalled the emotional moment when he first heard one of his songs on the radio. The Boss said he remembered where he was and what he was doing when the notes of a song from his debut album Greetings From Asbury Park, N.J., began ringing out one day in 1973.

Bruce Springsteen: ‘We’ll Be Touring Next Year If Everything Goes Well’

Bruce Springsteen is hopeful about hitting the road with the E Street Band in 2022. The Boss said in an interview with BBC Radio 2’s Zoe Ball (as transcribed by NME), “We’ll be touring next year if everything goes well. The E Street Band will be back on the road – you know, depending, of course, on the virus and what’s opening up.”

Bruce Springsteen has turned down the opportunity to have a service station in his hometown of New Jersey named after him. As Consequence Of Sound reports, the US state is honouring a number of its famous residents along the Garden State Parkway as part of Governor Phil Murphy’s plan to expand the NJ Hall Of Fame.

Broadway will require audiences to be fully vaccinated and wear masks at all shows, New York's theatre industry announced Friday, as the US steps up mandatory vaccinations. All performers, backstage crew and theatre staff will also have to be vaccinated, the Broadway League said in a statement. The rules will be in place through October and will apply to all of Broadway's 41 theatres, the trade association added. Masks will be required except while eating or drinking in designated locations, the Broadway League added.

Springsteen fans are saddling up in Tokyo. The Boss' fans in Japan are rooting for his daughter, Jessica Springsteen, as she's about to compete for the U.S. Jumping Team at the Olympics. About a half dozen assembled outside the Equestrian Park venue in Tokyo last Sunday, July 25, with signs...

You will need a vaccination to get in, but New York’s Central Park Homecoming Concert is still following social distancing protocols, New York City Mayor Bill DiBlasio announced. Performances will be spread out among all the boroughs, leading up to the main event. Legendary concert promoter Clive Davis followed suit, announcing the artists will be spread out among multiple genres, some produced through the Universal Hip Hop Museum.

It’s one of the great lyrical mysteries in all of music. Now, nearly 46 years after its release, we finally have our answer. Listen to your favorite Classic Rock now on Audacy and listen to music from Rock's greatest era on our Classic 70s Exclusive Station. The opening line of...

As part of his monthly live archival series, Bruce Springsteen has just issued yet another classic show from the E Street Band's famed tour behind 1984's Born In The U.S.A. The new set was taped on August 22nd, 1985 during “The Boss'” 10-night hometown run at New Jersey's Giants Stadium.

The New Jersey Turnpike Authority recently announced plans to rename the rest stops on the Garden State Parkway. The rest stops be named after some of the most famous people who have come out of the state in the past century. Some of those stops will be named after musicians, including Perth Amboy’s Jon Bon Jovi, Newark’s Whitney Houston, Hoboken’s Frank Sinatra, and Celia Cruz, who was born in Havana but who lived in Fort Lee when she died. Bruce Springsteen won’t be among the Jersey luminaries honored with their own rest stops, but that’s by his own choice.

Report: Film focusing on Springsteen and the E Street Band's “No Nukes” performances due out later in 2021

An archival film focusing on the performances that Bruce Springsteen and the E Street Band gave at the historic 1979 “No Nukes” concerts at Madison Square Garden in New York City will be released later this year, the popular Springsteen fan site Backstreets.com reports. According to the website, Sony Music...

Bruce Springsteen Said “No Thanks”, While Bon Jovi Said “Sure, Why Not”?

The “Chairman of the Board”, Frank Sinatra himself has one. So does Whitney Houston, Connie Chung, and Larry Doby. Jon Bon Jovi is getting one……and New Jersey offered Bruce Springsteen one, but he respectfully declined. What am I talking about? Just CLICK HERE/loudwire.com to find out!