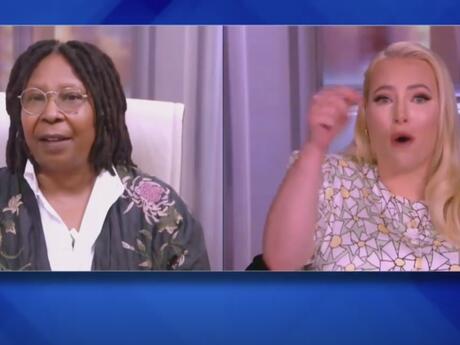 Whoopi Goldberg and Meghan McCain got into a heated exchange over President Joe Biden ’s recent outburst at a CNN correspondent.

He told Collins that she may be “in the wrong business”.

The president later apologised for having been “short” at the conference but has received criticism for his behaviour.

“Part of my problem with the Kaitlan Collins moment, just because Trump was so bad it doesn’t absolve Biden’s bad behaviour,” she said. “What [Biden] did was 100 per cent Trump.”

The conservator co-host claimed that “we would be screaming at the top of our lungs” if Trump had done the same thing, and that Biden has “gotten a pass” from the media.

The former Fox News personality went on to criticise Biden for continuing to “talk smack” about the press following his apology to Collins.

Her comments prompted co-host Whoopi Goldberg to reply: “Just to comment on that, the thing that I never saw Trump do was apologise to anybody and I will take it –” before McCain cut her off.

“With all due respect, I don’t care,” said McCain.

Goldberg responded: “Just let me finish what I’m saying,” before McCain again interrupted to state: “Well, with all due respect, I don’t care if he’s apologising. He just embarrassed himself.”

Following the heated argument, both Goldberg and McCain apologised to one another on air.

Rep. Ronny Jackson (R-Texas), the controversial former White House physician, said on Thursday that he believed President Biden would resign because of his limited cognitive abilities. During an episode of Fox’s “Hannity,” host Sean Hannity criticized responses Biden gave during a CNN town hall the day before, calling some “completely...

Meghan McCain may be fine with going head-to-head on The View, but that doesn’t mean she wants to see that happen anywhere else. On today’s episode of the ABC talk show, the co-host slammed a recent confrontation with Tucker Carlson in a fishing store, disagreeing with the other ladies who deemed the spat justifiable.

A tabloid had a strong speculation about Meghan McCain's departure for "The View" and it claims it has to do with her never-ending feud with Joy Behar. Was it true?. Early July, Megan McCain herself announced that she would leave ABC's "The View" due to the pandemic "dramatically" changing how she wants to live her life. The announcement has shocked many as her contract still has two more years to go, according to Insider.

Brian Stelter says Donald Trump’s continued promotion of the Big Lie makes sense “when viewed through the prism of narcissism.” He also points out that political reporters are becoming more explicit about describing Trump’s “delusions.”

President Biden is walking a fine line with Fox News, needling it this week on the subject of vaccine misinformation but avoiding an all-out war with a cable news network. Biden has yet to sit down with Fox News for an interview, a move that could lead to criticism from the left.

Donald Trump Jr. has weighed into the debate over the future of The View after Meghan McCain announced that she would be leaving the ABC show. There's growing speculation over who might replace McCain after she said earlier this month that she would leave the show to remain in Washington, D.C., where she moved before the birth of her daughter, Liberty.

'The View' Executives Considering Megyn Kelly To Replace Meghan McCain — But 'It's Going To Cost Them,' Source Says

A source exclusively tells OK! that Megyn Kelly is being wooed to join The View following Meghan McCain’s decision to leave the chatfest at the end of July. “Megyn’s name immediately came up because execs think she would generate a lot of buzz and boost ratings,” the source says of the former news anchor, whose morning show at NBC was canceled in 2018 in the wake of her controversial on-air comments.

Some of TV's most dependable rivalries in recent years have been front and center on ABC's The View, but things could potentially become less nerve-grinding in the topical chat show's future now that Meghan McCain is making her exit going into the fall. Of course, that only holds true if the network replaces McCain with someone who won't dive right into butting heads with cohosts Whoopi Goldberg and Joy Behar. Before making any permanent replacement choice goes, though, it seems like The View will utilize a guest-host plan similar to how Jeopardy! has handled filling its Alex Trebek void.

Meghan McCain Spars With Co-Hosts Over Gun Rights on ‘The View’: “I Never Want to Be Lectured by People Who Don’t Own Guns”

Meghan McCain Threatens to Quit Twitter on the Same Day She Leaves 'The View': "It's Become a Noticeably More Darker, Uglier Place" There was quite a bit of tension on today’s episode of The View as co-host Meghan McCain found herself at odds with her fellow talk show hosts on the matter of gun rights in America. McCain was visibly rubbed the wrong way as Sunny Hostin, Ana Navarro, and the others took jabs at the NRA and the Second Amendment — but she wasn’t letting go of the argument without a few passive-aggressive comments of her own.

'The View' in No Rush to Replace Meghan McCain, But Want a Conservative

Meghan McCain's vacant seat on "The View" will be filled by another strong, conservative woman, but they're also in no hurry to make the decision ... sources close to the talk show tell TMZ. As we reported ... Meghan announced she was leaving "The View" on July 1 following a...

Meghan McCain, the conservative panel member of the daytime talk show The View, has defended Fox News amid criticism that the right-leaning network has undermined trust in the COVID-19 vaccine. The View's panelists discussed vaccine misinformation on Monday. Fellow panelist Sunny Hostin mentioned a July 16 study from the media...

"The View" co-host Meghan McCain claimed Thursday that she offered to assist President Joe Biden's administration with outreach on coronavirus vaccination rates in an effort to convince more people who identify as Republicans to get vaccinated. During a discussion on vaccination rates, the lone Republican on the program told her...

'The View': Sara Haines Weighs in on Who Should Replace Meghan McCain

This week Meghan McCain announced that she would be leaving The View. Now, viewers are speculating who will take her place on the panel. Fellow View co-host Sara Haines has an idea for the direction of the show in light of McCain's exit. On Thursday, Haines was spotted leaving the...

Meghan McCain announced that this season of The View would be her last, sparking quite the predictable reaction from co-host Joy Behar. “I wish nothing but continued success and good wishes and good luck to all of you and to this show, and I’m just eternally grateful to have had this opportunity here,” McCain said while announcing her departure on Thursday’s The View. “So seriously, thank you from the absolute bottom of my heart, and I will still be here another month, so if you guys want to fight a little bit more, we have four more weeks.”

Meghan McCain Forced To Quit ‘The View’ By Co-Hosts?

Was Meghan McCain forced off of The View by her co-hosts? That’s what one tabloid would have readers believe. Gossip Cop investigates the rumor. According to this week’s edition of Star, Meghan McCain’s exit from the view may not have been as amicable as she made it out to be. The tabloid alleges McCain’s co-hosts “aren’t sorry to see her go.” The tabloid’s inside source dishes, “Everyone knows the ladies couldn’t stand Meghan.” The outlet rehashes the nasty arguments McCain has had with her co-hosts due to their opposing views. The magazine even references an incident shortly after McCain returned from maternity leave and Joy Behar told her on-air, “I did not miss you.”

President Joe Biden appeared to mock Donald Trump during a campaign rally in Virginia. In a video shared to Twitter by @Acyn, President Biden was filmed mid-speech making a point of stopping to drink from a glass of water. "Excuse me," he said before putting the glass to his mouth...

Report: Meghan McCain Quit ‘The View’ After Being ‘Exhausted’ Of Screaming Matches With Joy Behar?

Is Joy Behar the real reason behind Meghan McCain‘s exit from The View? That’s the story one tabloid is pushing this week. Gossip Cop investigates the rumor. Report Reveals Why Meghan McCain Is Leaving The View?. This week’s edition of Life & Style reports Meghan McCain is saying her goodbyes...