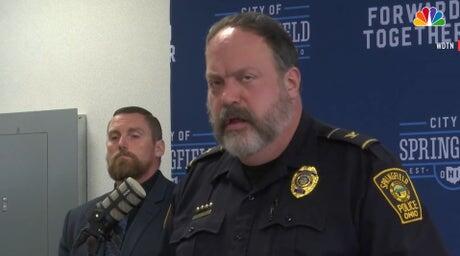 A police officer in Ohio has been placed on leave after her dashcam video showed her patrol car driving over a shooting victim lying on a street, authorities said. The man died soon after.

The incident occurred on the night of 13 June, when Springfield police officer Amanda Rosales was responding to a 911 call about a shooting on West Liberty Avenue.

According to the video from inside of the cruise, Ms Rosales was driving the car when she struck an already bleeding Eric Cole, reported NBC News .

Cole, a Black man, was flown to a hospital but was pronounced dead shortly afterwards, police chief Lee Graf said at a news conference on Wednesday. The cause of death, however, is unclear at the moment and Montgomery County Coroner’s Office is working to determine it.

Even though police have called it an “accident”, Cole’s family has asked why they were not immediately informed about Ms Rosales’s vehicle running him over.

“The lead officer was trying to catch addresses on the house. Eric was lying in the street,” police chief Lee Graf said during a tense media briefing attended by Cole’s relatives. “This was an accident. It doesn’t mean it’s OK. It was an accident. This was not an intentional act on the part of the officer. I am sure of that.”

The dashcam video released to several media outlets shows Cole lying in a street in a white shirt and blue shorts. His shirt was covered in blood when the police car arriving at the scene struck him.

Ms Rosales has been placed on administrative leave.

Cole’s mother, Regina Wilson, however, was unconvinced by the explanation offered by the police, and asked why were they not told “that [Rosales] ran over my son.”

“I want the officer held accountable just like if they get the suspect, they will hold him accountable,” Ms Wilson was quoted as saying by NBC affiliate WDTN.

TEMPLE, Texas (KWTX) - Police released surveillance video Friday of a shooting in late June in the parking lot of a Temple nightclub that left three people injured. The shooting was reported at just after 2:30 p.m. on June 26 in the 1400 block of Martin Luther King Jr. Lane near Club Paradise.

She died of a fentanyl overdose. Police says these 4 drove for an hour asking for Narcan before calling 911

HOUMA, La. — Three people are in jail and one is still wanted on a charge of negligent homicide in the death of a Houma woman who died of a meth and fentanyl overdose, police say. Houma police identified the woman as 53-year-old Sherrial Guidry. According to a statement from...

A police officer in Baltimore, Maryland, has been arrested after the body of his teenage stepson was found inside a wall of the family’s home, according to reports.Officers were allegedly called to the house on Tuesday because of a custody dispute with the teenager’s mother, who was waiting outside to collect her 15-year-old son, Dasan Jones.CBS Baltimore reported on Thursday that Eric Banks Jr, 34, had allowed officers to carry out a search of the family home when they discovered a white sheet hiding a hole in a wall.He allegedly told officers it was a hiding place for a gun,...

A fifth person has been arrested in connection with the murder of a Georgia taxi driver whose burnt remains were found cut up in a cabin in the woods, according to state authorities.Juan Ayala-Rodgriuez was taken into custody by the United State’s Marshall Service in Mexico for his alleged involvement in the murder of Rossanna Delgado, according to the Georgia Bureau of Investigations. According to law enforcement, there are eight suspects in total over the murder of Ms Delgado, a 37-year-old mother of two, who worked as driver for the ride-share app, Lyft.Three other suspects connected to the case remain...

‘I shot somebody near Douglass Park’: Woman walks into police station after allegedly shooting woman in Middletown

An 18-year-old woman is recovering in the hospital after she was shot in the back late Saturday while sitting in a car near a Middletown park, Middletown police said. Officers were called at about 11:40 p.m. to Kettering Health Middletown for a woman suffering from a gunshot wound, police said.

Memphis, Tenn. — A Memphis woman and her boyfriend face serious charges after a dispute in a Chick-Fil-A drive thru line led to a gun being pulled, according to the Memphis Police Department. MPD said that 30-year-old Ashley Daniels was waiting in line in her red Camaro at the popular...

Trial starts for man accused of cutting off mother’s head, caught on camera tossing her into carwash dumpster: Prosecutor

The murder trial for a Colorado man accused of killing his own mother and tossing her into a dumpster begins this week in Pueblo. As CrimeOnline previously reported, investigators released surveillance video of a man in October 2019 driving up to a dumpster at a South Side Pueblo car wash off of Ivywood Lane. The man then took a suitcase from his trunk and threw it in the dumpster.

Family members of a 5-year-old Las Vegas girl found dead in a hot house with no air conditioning Monday said the youth’s mother had an extensive support system available to her, but she never reached out for help or told anyone close to her that she was struggling financially. Kemaya...

Motorcyclist pulls gun in road-rage incident, gets shot dead by other driver

A road-rage incident in Texas turned deadly when a motorcyclist pulled a gun — only to be shot by the other driver in what authorities are treating as an act of self-defense, according to reports. The fatal chain of events unfolded last Friday on the I-35 highway in Fort Worth,...

A lawsuit alleges that St. Louis police unlawfully obtained a "no knock" search warrant and burst into Don Clark Sr.'s home as he slept.

The infamous local mother who abused her adoptive children is facing new charges after police learned more about the abuse the children suffered while in her care. Shelley Noreika, 47, of Newville was arrested on Wednesday night. Three of her four adoptive children reported the abuse cited in this round...

A man tried to rape a woman Wednesday evening at a grocery store in York Township, according to York Area Regional Police . The suspect sexually assaulted the woman and attempted to rape her at the Giant Food Stores at 275 Pauline Drive in York Township, police said in a news release.

A woman found dead inside a parked car in Lakeview in May was killed by her boyfriend after she confronted him about infidelity, prosecutors said Sunday. Police found 41-year-old Kendra Gardner’s body inside a gold Cadillac on the 3000 block of North Clifton after a passerby reported seeing an unresponsive person inside around 4 p.m. on May 26. CPD issued a missing person bulletin for Gardner earlier that day.

Ark. Teen, 17, Is Fatally Shot During Traffic Stop by Deputy, Who Gets Fired for Having Body Cam Off

A memorial service was held Tuesday for Hunter Brittain — one week after the officer who fatally shot the Arkansas teen was fired from his post for failing to activate his body-worn camera, PEOPLE confirms. The Arkansas State Police continues to lead the investigation into the June 23 fatal shooting,...

One man was charged Saturday after police say he got into a fight with another man over 22 cents in change at a Mississippi Walmart store. One woman was shot multiple times at the Natchez, Mississippi, Walmart and taken to a hospital in Jackson and two police officers sustained injuries in the detention of Michael Shawn Coon who is being charged with three counts of aggravated assault on a police officer.

HOUSTON, Texas (KTRK) -- A Houston dad will now spend 45 years behind bars after pleading guilty for the beating death of his 2-year-old son. The incident happened in July 2020 when authorities say Antonio Hicks Sr. lost his temper while potty training the boy and hit him several times.

A Las Vegas woman allegedly killed her 5-year-old daughter, who was found dead in her sweltering bedroom — and told investigators “it was a necessary sacrifice,” police said. Kemaya Taylor, 23, was charged with murder and child abuse after her daughter’s body was discovered in the family’s stifling home on...

Authorities said Saturday they have now arrested five suspects in the death of a Georgia mother of two and Lyft driver earlier this year — and three more suspect remain at large. Venezuelan-born Rossana Delgado, 37, disappeared in mid-April in DeKalb County, near Atlanta. Four days after she was reported...