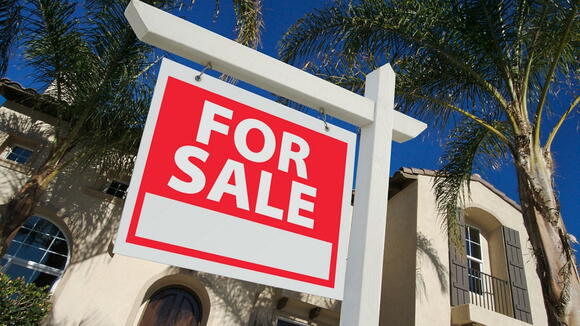 COLORADO SPRINGS, Colo. — Realtors try to put on a positive spin when selling a home, but a real estate agent in Colorado is not mincing words, calling a listing in Colorado Springs a “little slice of hell.”

And with the real estate market on fire, even this house, which sports profane graffiti on the inside wall, soiled carpets from pets and a broken refrigerator in the basement that reeks of rancid meat, could be a hot commodity.

“We have an expression, ‘If it smells, it won’t sell,’” Mimi Foster, the listing agent with Falcon Property Company, told KMGH. “I am putting that to the test.”

According to its real estate listing, the “formerly majestic” five-bedroom, four-bathroom home with a three-car garage is now “every landlord’s nightmare.”

“If you dream of owning your own little slice of hell and turning it into a piece of heaven, then look no further,” the listing reads, “This house is not for the faint of heart but for that special person who can see through the rough diamond to the polished gem inside.”

Foster’s listing also notes that “there is not one surface of the home that has not been enhanced with black spray paint or a swinging hammer.” The damage was done by “an angry departing tenant who didn’t want to pay rent,” the listing reads.

“But don’t let that slow you down,” the listing continues. “It’s not nearly as daunting as the freezer in the basement that’s full of meat and hasn’t had electricity to it for over a year.”

The listing, which Foster posted to Redfin, also points out that the back porch is falling off the house and that the entire foundation sits in a “pink” zone for geological landslides, KMGH reported.

“I wanted them to know that they were getting a damaged house with a lot of potential,” Foster told the television station. “I didn’t want anybody to walk in here and be surprised with what they found.”

Even with the damage, the smells and the graffiti, Foster said she received 16 written cash offers in the first 24 hours after putting the 3,598-square-foot house on the market.

“I list vacant houses all the time. I have not seen this kind of hysteria, even in this market,” Foster told KMGH. “I’ve gotten about 89 text messages since we’ve gotten to the house this afternoon.

“It was a happy place for decades. And somebody will come in and they will get rid of the anger and anguish that went on here. And it will be a cherished place to live once again.”

Buying a Home in Colorado Springs? Here’s What to Expect

Are you interested in buying a home? Well, did you know that in many housing markets, it can be less expensive to own a home than to rent an existing home or apartment? This is why you should think twice & wisely before you make your next big step in regards to your flat or home, especially around the Colorado Springs area. Keep on reading and understand what are some crucial tips & tricks when it comes to your next big purchase.

(The Center Square) – Recent housing inventory gains haven’t slowed Colorado’s red-hot real estate market like some analysts predicted. According to the latest monthly figures from the Colorado Association of Realtors (CAR), housing inventory increased by 24% in June, with the statewide median sales price for a single-family home increasing nearly 24% year-over-year to $530,000.

The housing market in Colorado is red hot, with statewide home prices increasing approximately 24 percent year over year, as of June 2021. With this in mind, it's not too surprising that a Colorado city was able to break into the Wall Street Journal's list of top 20 'emerging housing markets' for the second quarter of 2021.

Affordable Housing Is Still A Thing In These 4 Colorado Counties

If you live in Colorado or have been following the news, you know that housing prices and the overall cost of living in the Centennial State is astronomical and that trying even to find a house is next to impossible. Is there any hope for those of us who don’t make over $1M a year (or do not want to incur massive amounts of debt)? It turns out there is, as affordable housing is still a thing in these four Colorado counties:

Little town has claim to Colorado's only rock-crawling park

RANGELY • At the base of a craggy ridge in Colorado’s far western desert, Shawn Morgan parks his souped-up Jeep and eyes his target. While an outsider sees a cluster of rocks, he sees a driving lane. “We call this the competition spot, or the playground,” Morgan says. The competition...

It's now, if there was ever a moment to sell a house of horrors. You'd think that in this crazy market, where record low inventory and skyrocketing demand are driving house prices ever higher, everything you placed on the market would sell. Mimi Foster of Falcon Property Company in Colorado Springs, Colorado, decided to put one house to the test.

A Dallas-based developer has proposed to convert a Motel 6 in Colorado Springs into affordable housing, the Gazette reports. The project would turn the hotel into 117 studio apartments. This article has been intentionally blurred. You must purchase a subscription to view the rest of this content. Want to See...

Living Local Content Disclaimer: The information, advice and answers displayed in the Living Local section of FOX21News.com are those of individual sponsors, not FOX21. Colorado First Time Home Buyer specializes in down payment assistance programs and can provide the resources to get you into your first home. Randy Bell with...

Another tiny house festival is coming to Colorado

The tiny house and van living movements are growing in popularity

LOS ANGELES — It was never Meah Burstein's plan to move into her parents’ guest house. The 26-year-old was enjoying living in downtown Los Angeles with her fiancé, 28-year-old Lenard Gorokhov, far away from the suburbs of Woodland Hills where she grew up. But then COVID-19 hit, and all the things that made living downtown enjoyable suddenly disappeared.

Holly Ritchie on the Housing Market

YOUNGSTOWN, Ohio – In this episode of The Real T, Lisa Resnick welcomes Holly Ritchie, top producing agent with Keller Williams Chervenic Realty. The Real T is sponsored by Platt Insurance Group: an independent insurance agency that offers personal, commercial, life, financial and cyber insurance. The company, which has locations in Youngstown and Warren, is celebrating 10 years in business in 2021.

IRON RANGE — Iron Pine Veterinary Services is a limited-service, mobile veterinary practice that will specialize in making house calls to provide exceptional care to the Iron Range and surrounding areas. Dr. Molly Feiro, originally from Hibbing, is Iron Pine’s owner and veterinarian. After finishing vet school at the University...

When Andrew and Heidi Stevens decided to upgrade from their $289,900 starter house in Crystal last month, they expected an offer within days, maybe even hours. Instead, it took two weeks and a $10,000 price cut before they found a buyer, leaving them to wonder: What happened to the red-hot market?

MANKATO, Minn — Until the pandemic hit, everything was in place for a storybook ending for “The Little Stone House.”. One of Mankato’s smallest and least pretentious homes was set to stand beside the most grandiose structures in the community as the latest addition to the small but distinguished list of landmarks representing the community’s heritage.

The rich history of the Jones Family is an African American story like no other and continues to be well known throughout the Sullivan’s Island community. As the story goes, back in the 1800s, slave trader Vincent Peter was on a voyage to Africa. On the boat, he met a...

This $1.85 Million Mansion In Canyon Has The Largest Backyard In The World

I'm such a sucker for big houses I can't afford, but it makes it worse when it's right in our backyard. A massive home in Canyon, Texas has been listed, and it's absolutely immaculate. I mean this is like a dream home, and under $2 million to boot. This sprawling...

The luxury and lifestyle travel company, Condé Nast, recently published what they consider to be the best state parks throughout the country. There are more than 10,000 state parks in the U.S., each boasting beautiful sights and unique features of its own. From waterfalls to wildlife, state parks are definitely worth the visit and are oftentimes much less crowded than nearby national parks.

ALLENTOWN, Pa. – During a special city council meeting Wednesday night, the Allentown Housing Authority shared an update on the Little Lehigh housing development project. Daniel Farrell, AHA executive director, said the authority's plan is to demolish all the existing 76 units in two phases and ultimately replace them with 96 units.