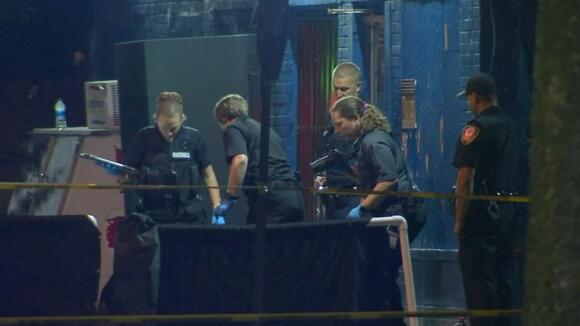 Durham police officers are investigating a shooting that left two people dead and injured two others Thursday night, authorities said. Officials said the shooting happened around 9:40 p.m. along the 1600 block of Holloway Street and Guthrie Avenue. Officers said the two people who died were both men. Both were found on the ground outside a convenience store. One was dead when officers arrived; the other died at the hospital. WATCH: Durham activists react to spate of gun violence

The third victim was a female who was taken to the hospital for treatment. She had been shot in the leg. The fourth victim was a male who had been shot in the foot. Investigators said the shooting does not appear to be random. They said the victims and the shooter appear to know each other. However, the identity of the shooter has not been made public. Police did not specifically say if the shooter was in custody. They did say no charges had been filed at this time. Anyone with information on the shooting is asked to contact the Durham Police Department at (919) 683-1200. See breaking news? Tell us about it here. This was not the only instance of gun violence in the Triangle on Thursday night into Friday morning. A domestic violence incident ended in gunfire around 1:30 a.m. Friday on Tranquil Road in Durham. A woman was injured in this shooting; her injuries are not life-threatening. The shooter got away before police arrived. On Thursday night in Raleigh there were two shootings--one on Bledsoe Avenue and the other on Sumner Boulevard. Two men total were taken to the hospital in those shootings.

A father, his 10-year-old son and two others were injured when two dogs attacked Sunday afternoon, Raleigh police said.

Woman charged in death of 21-year-old motorcyclist in Fayetteville

Tamara Marcella Hope, 26, turned herself in to Fayetteville Police in connection with the fatal crash along Ramsey Street.

1 killed, 2 hospitalized in crash on Junction Road in Durham

One person died in a Monday morning crash in Durham.

Woman seriously injured after being hit by gunfire in Durham

The shooting happened around 3 a.m. in the 600 block of Hickory Street.

Two men were shot and killed inside a car on the entrance ramp to I-85 at Duke Street on Friday.

21-year-old motorcyclist killed in crash in Fayetteville around 1 a.m.

The crash happened around 1:10 a.m. along Ramsey Street near Tallstone Drive.

Investigators said two men were shot and killed inside a car on the entrance ramp to I-85 at Duke Street.

The event on Saturday, which will be held on what would have been D.J. Dawson's 33rd birthday, will be at Seabrook Park and will feature food trucks and live music as well as remarks from Fayetteville Mayor Mitch Colvin.

A 43-foot trailer has been traveling the country since May, honoring 338 officers who died in the line of duty throughout 2020.

A death investigation is underway in Vance County after a woman was found dead near an I-85 exit ramp Thursday afternoon.

1 dead, 6 injured - including 4 children - in Friday morning crash on Interstate 40

Seven people were inside the 4-door car when it crashed on I-40.

Death investigation shuts down I-85 ramps in Vance County

72-year-old innocent bystander dies after being shot in Erwin; suspect in custody

Zebulon police said the 17-year-old boy shot in the parking lot of a vape shop has died.