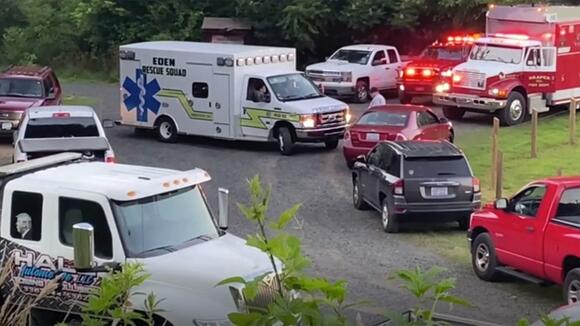 ROCKINGHAM COUNTY, N.C. — Three people are dead and two remain missing after a group floating down a North Carolina river on inflatable tubes went over the edge of a steep dam, authorities said.

The five tubers were part of a group of nine people total who went tubing on the Dan River Wednesday evening, according to the Rockingham County Sheriff’s Office, ABC News reported.

>> Reporter Dave Faherty is in Rockingham County and will have the very latest on the search efforts on Channel 9.

The group’s tubes were believed to be tied together, but at one point several came apart. The tubers floated over a Duke Energy dam, located near a local power plant, at around 7p.m. on Wednesday, authorities said.

Four people who were “hanging on to various items” were spotted by construction workers and rescued from the river at around 3:30 p.m. Thursday, Lt. Kevin Suthard, a spokesperson for the Rockingham County Sheriff’s Office, told ABC Radio.

They were sent to a hospital for treatment, he said. They are expected to recover.

Two people are still missing after going over the edge of a dam, the Rockingham County Sheriff’s Office said. A search and rescue effort is currently underway from the Duke Energy plant to the Virginia state line, authorities said.

“We have done both an air and water search at this time,” Cates told Winston-Salem, North Carolina, ABC affiliate WXLV Thursday evening, prior to the three victims being found.

Aircraft have searched the river 6 miles into Virginia and back and along the ground adjacent to the river, Cates said. Another aircraft search was planned for Thursday night equipped with an infrared camera.

“They’ll be able to look at night, pick up heat images at night, in case they were able to get out of the river,” Cates said. “We’re going to stay positive that we can do a rescue rather than a recovery.”

Officials said the search for the two others resumed Friday morning. The investigation runs from Rockingham County all the way to the Virginia borderline.

Tubing is a “regular activity” in the area, said Suthard, though he added that people are discouraged from tubing near the dam.

Cates said it’s not unusual for people to float the river on tubes or rafts in the area but most get out and walk around the dam, which is marked by signs. The dam is approximately 8 feet tall, he said.

ABC News’ Will McDuffie contributed to this report.

(WATCH BELOW: Jeep found idling in spillway of dam)

CONWAY, S.C. — A manufacturer of cages for inmate transport vans has agreed to pay $1 million to the family of a South Carolina mental health patient who drowned during 2018′s Hurricane Florence while trapped inside a sheriff’s department van outfitted by the company. [ Sheriff: Guard waved van around...

NC Zoo to vaccinate some animals against COVID-19

CHARLOTTE — New data released Friday morning by Mecklenburg County revealed that fewer than 1% of positive COVID-19 cases in the county since spring were among fully vaccinated people. County officials said that between March 22 and July 27, there have been 376 confirmed cases of COVID-19 in fully vaccinated...