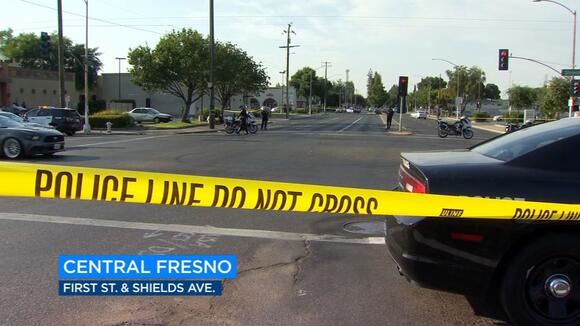 A 15-year-old teenager has been hospitalized after being hit by a car in central Fresno. The Fresno Police Department says it happened just before 5 pm Thursday near Shields and First. Police say witnesses told them the teenager was going north on First on his scooter and when he started crossing the street at the intersection of First and Shields, the collision happened. The teenager landed on the west lanes of Shields and had major injuries to his head and upper body. He was taken to Community Regional Medical Center and is in critical condition. Police say the driver stayed at the scene and is cooperating. Alcohol or drugs do not appear to be factors.

Authorities are searching for a group of suspects who led Fresno County sheriff's deputies on a high-speed chase before crashing their car in central Fresno.

The victim was shot in the face and hip. He was taken to a local hospital and is expected to survive, police said.

An intoxicated driver caused a deadly crash just outside Tulare that killed a teenager and left another with major injuries, the California Highway Patrol says.

Motorcyclist hospitalized after crash in Clovis

Clovis police say the rider was heading west on Shaw but lost control for unknown reasons at the Sunnyside intersection.

In video of the fire, you can see giant flames coming out of the attic of one of the homes and clouds of thick, grey smoke billowing upward. Some parts of the roof are visibly blackened and charred.

2 people killed, 2 others injured in crash near Kerman

Two people were killed and two others injured after a crash near Kerman on Saturday night.

The Fresno County Coroner's Office said the victim is Josue Cardenas, 18, from Parlier.

A domestic violence hostage incident in Wasco ended in the deaths of five people, including a Kern County Sheriff's deputy, during the weekend.

The Park Fire is burning northeast of Springville off Balch Park Road and Bear Creek Drive.

A Fresno County death penalty trial 12 years in the making hit a speed bump Monday even as attorneys dug deeper into the evidence.

A motorcyclist has been hospitalized with major injuries after crashing with a van in central Fresno.

A fragment from one of the bullets hit a woman in the lower leg. Police are trying to figure out why the shooter targeted the family.

An investigation is underway after a man arrived at CRMC with a gunshot wound, shortly after police were called to a shooting in northeast Fresno.

3 in custody after chase in Fresno, deputies say

Three suspects are is in custody after leading deputies on a short chase in Fresno Thursday afternoon.

The California Highway Patrol is searching for a hit-and-run driver who severely injured a pedestrian in Merced.

Flames scorched an abandoned Fresno building for the second time in the last two months.

Matthew Thoke was last seen around 1 pm Wednesday hiking along the High Sierra Trail Between Kaweah Gap and Crescent Meadow.

Northbound State Route 99 in southwest Fresno is now open to drivers after a crash involving a big rig shut down the highway for several hours early Thursday morning.

Firefighters arrived and found large flames from a vacant house fire in the Exeter area had spread to three neighboring homes.

Fresno police seeking sponsorships for its 'Fight Like A Girl' program

More than 100 Fresno girls are on the waiting list to be part of the program, which aims to teach boxing and fighting techniques to girls in the 12 to 14 age group.