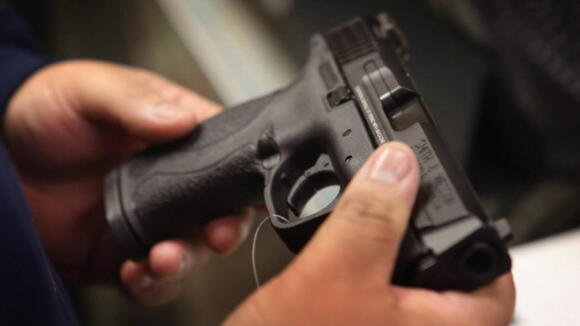 SURPRISE, Ariz. — One person was killed and 12 others were injured during a 90-minute shooting spree spread over eight Arizona cities on Thursday, authorities said.

The alleged gunman is in custody after the shootings, KTVK reported. Police said the shootings took place in Glendale, Peoria, Surprise, and along the freeways in the Phoenix metropolitan area, the television station reported.

According to the Peoria Police Department, four people were struck by a bullet, while the other nine people were injured during the incidents but were not physically shot, the television station reported.

The person who was killed died on the who was found shot in a drainage ditch along Loop 101 and Thunderbird Road in Peoria, KTVK reported.

Some of the victims were injured from shrapnel from broken glass or were hurt as a result of a car crash, according to Brandon Sheffert, the public information officer for the Peoria Police Department.

“It’s a very complex and ongoing investigation,” Sheffert said during a news conference.

The suspect was taken into custody shortly around noon in Surprise during a traffic stop, KNXV reported. Police believe the man, who was not identified, acted alone. A motive was not immediately identified, the television station reported.

The victims have not been identified.

In addition to the Peoria Police Department, police from Surprise and Glendale Police, along with FBI and ATF, are also assisting with the investigations, KNXV reported.

HOUSTON — A man hijacked a Houston ambulance Friday and then held a patient and medics at gunpoint, investigators said. Houston police said the medics were headed to a hospital with a patient when the man, who was in another vehicle, forced the ambulance to stop, made the driver get out at gunpoint, then drove off, KTRK reported.

SURFSIDE, Fla. — After weeks of sifting through rubble in search of victims and survivors of the June 24 partial collapse of Champlain Towers South, firefighters have ended their recovery mission, The Associated Press reported Friday. Miami-Dade Assistant Fire Chief Raide Jadallah confirmed the agency’s decision to the AP, though...

MEMPHIS, Tenn. — (AP) — A Tennessee man was sentenced to five years in prison this week for his role in an international "swatting" scheme that led to a person's death, The Commercial Appeal reported. Authorities said Shane Sonderman, of Lauderdale County, worked with others, including a minor in Great...

9 children among those displaced by north Charlotte fire

CHARLOTTE — Twelve people, including six children and four pets, were rescued from a home after a fire broke out in a dryer, Charlotte firefighters said. The fire started at about 9:30 Friday morning in a house on Southwind Drive off of Sunset Road in north Charlotte. Twenty-seven firefighters rescued...

HOPKINSVILLE, Ky. — A Kentucky woman is accused of using a wooden spoon to discipline her children, authorities said. Jessica Maddux, 25, of Hopkinsville, was arrested Thursday, WZTV reported. She is charged with two counts of first-degree criminal abuse, according to WHOP. According to a police report, Maddux is accused...

DENVER — Denver police are making sure drivers with a broken head or tail light have no excuses to make a repair and are handing out auto parts gift cards instead of citations for the equipment failures. Advance Auto Parts supplied Denver police with $25 gift cards that officers can...

MIAMI — (AP) — Firefighters officially ended their search for bodies in the debris of the collapsed Surfside condo building on Friday, even as police and forensic specialists continue working to identify human remains. Miami-Dade Assistant Fire Chief Raide Jadallah told The Associated Press that the fire department’s role in...