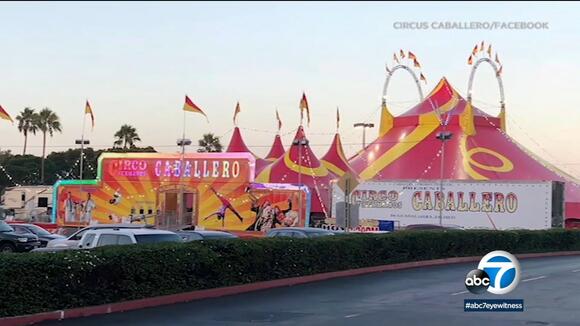 After being stranded in South El Monte for 15 months because of the pandemic, Circus Caballero - a traveling circus from Guadalajara, Mexico - reopened stronger than ever with a new show Thursday night. "We are excited, very excited. It's been such a long time. We never expected to live something like that," said Ruben Caballero, owner of the circus. Cabellero said in early 2020 they were performing in Thousand Oaks. That's when the pandemic started and closed down their circus. "We got a lot of thoughts that we don't even know if we ever were going to come back and do what we like to do -- which is the circus," said Caballero. RELATED: Traveling circus stranded in South El Monte organizes virtual performance to celebrate Children's Day in Mexico

Despite being stranded at a South El Monte parking lot during the coronavirus pandemic, Circus Caballero will hold a free virtual show to commemorate Children's Day in Mexico.

The circus has performed in a South El Monte parking lot for the past five years. When the lot owner found out the circus was stranded, he opened up the gate and allowed them to stay for free. "When you have people that you trust and have people that enjoy being around, you do things like that," said John Dewitt, owner of the lot. And the community also came out to help by donating food and having fundraisers for the Caballero family. "Come and help. Not only support them, that we really need their help, the circus, but also to come and provide for the community that's going to support educational foundations," said South El Monte Mayor Gloria Olmos. Even though the circus has been closed for over a year, the performers started rehearsing right away for the new show. "Thank you for all of the support that we got through the city, through the Chamber of Commerce, through Mr. DeWitt and through a lot of other people," said Caballero. Click here for showtimes and locations. Follow Eric on social media: Facebook.com/abc7eric Twitter.com/abc7eric Instagram.com/abc7eric

Locals from the city of Torrance share what they love most about the small beach town in LA's South Bay area.

Looking for a job? Here's who is hiring in SoCal amid coronavirus economic slowdown

While the coronavirus has led to shuttered businesses and massive layoffs, here are some of the companies that need more workers.

Santa Anita Park is welcoming an event billed as the "State Fair," with fried food, live entertainment and games.

A COVID-19 outbreak in Santa Cruz County is linked to a concert by the Los Angeles-based band Grateful Shred.