Businesses bet on Black culture amid demands for racial justice. Now experts warn Juneteenth is next to be whitewashed. 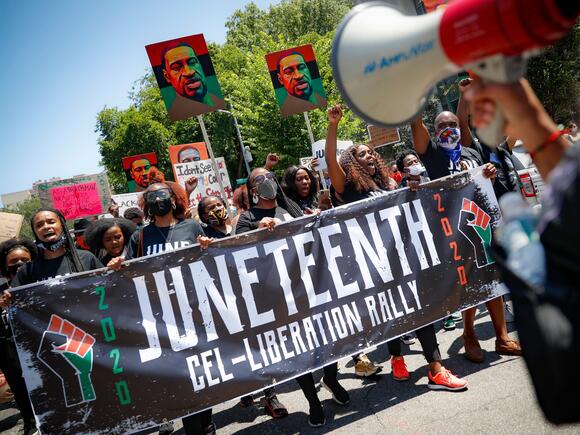 The world mourned after witnessing the murder of George Floyd.

Protesters quickly took to the streets, but the racial unrest in late May and June of last year was only the beginning of a larger conversation the country would hold about systemic racism. Black communities called out racial violence and discrimination in workplaces, and neighborhoods, and schools - where American education often leaves out their history.

Demands for change also came with calls for corporate reckoning.

Major corporations courted these same consumers by using Juneteenth, a once relatively unknown holiday that gained wider recognition in the aftermath of Floyd's death and on Thursday became a US federal holiday.

Critics, however, say the new corporate support is just a repeat of political powers using holidays for consumption rather than education.

"I remember the fight for Martin Luther King Day over the years, and now this is a sales day," Earl Fowlkes, the president of the Center of Black Equity, told Insider.

"Juneteenth is another opportunity for businesses to sell to Black folks and wrap it up," he added.

Prior to 2020, companies seldom marketed to Black consumers for Juneteenth

Few Americans outside Black communities knew much about Juneteenth, the June 19 holiday that commemorates the end of slavery in the US, before last year. Forty-five percent of Americans polled June 21-23 of last year by YouGov and The Economist said they first learned about it in 2020, while another 12% said they'd still never learned about it.

In the same poll, 59% of respondents said they believed it should become a national federal holiday. That goal came to fruition Thursday when President Joe Biden signed into law a bill passed by Congress this week. Because Juneteenth this year falls on a Saturday, it was observed for the first time as a national holiday Friday.

"It is the commercial world adjusting itself to continue to attract as many Black consumers as possible,'' Jared Ball, a professor at Morgan State University who wrote the book "The Myth and Propaganda of Black Buying Power," told Insider.

While accounting for only 14% of the US population, Black consumers have outsize spending power in product categories as varied as feminine hygiene and refrigerated drinks, a 2018 Nielsen report found.

Critics like Ball, however, argue this buying power does always equal the political power needed to start real change.

He points to the rush of Juneteenth advertising as examples of companies trying "to protect themselves as a class from a potential uprising, from more potential criticism coming from Black communities about the relationship that businesses have to Black communities."

In a study conducted by the Collage Group , 62% of Black consumers responded that America's institutions were responsible for both maintaining and reinforcing racial inequalities.

And 72% of Black respondents said companies needed to put more pressure on local and state governments.

In total, companies have pledged $50 billion toward racial equity since Floyd's murder, according to a recent study conducted by Creative Investment Research.

But skeptics question how these pledges will be used to make real change for Black communities.

Major corporations like Nike, Twitter, Google, and others all announced that Juneteenth would be a corporate holiday, with others like Netflix sharing new diversity reports that included initiatives to support staff members from marginalized backgrounds in light of the conversation sparked by Black consumers.

But Fowlkes simply wants to know "are they contributing to the neighborhood?"

"Ultimately that's going to be the way that we teach these businesses how to market to us," he said. "It's not just having some nice commercials for the community."

Corporations made grand commitments that promised the start of change, but already many haven't proved they have lived up to their word.

Of the $50 billion pledged, only $250 million has been spent or committed to a specific initiative. Influencers have even been accused of discreetly removing black squares from their timelines - which various people on the internet had adopted last year as a show of support - after news around the protests began to die down.

As a result of what many have called performative allyship and corporate co-opting of Juneteenth, many notable figures have pushed Black consumers to use their buying power to directly support Black-owned businesses.

But while Black consumerism is being directed toward marginalized businesses, some activists say it still isn't enough.

"None of these actions will address the inequality that Black people continue to suffer," Ball told Insider. "That inequality is not borne out of financial literacy or illiteracy, shopping or consumption habits."

Juneteenth represents the resilience of a people once deemed not human and whose unpaid labor was used to build the foundation of the United States.

As the holiday transitions from a community gathering among the newly freed to a federal holiday with company paid-time off, travel, and retail sales, Fowlkes says the commodification of liberation does not help the movement.

"There are elected officials who don't support many of the things that are important to Black folks, yet they're willing to push Juneteenth through," he said, cautioning that, in the end, the image of solidarity becomes a tool of capitalist conquest at the expense of a culture that has already been deprived of basic human rights.

55 nooses were found at work sites since 2015, a Washington Post analysis found. Only 1 arrest has been made.

The nooses  - a symbol of racial hatred connected to lynching - were found in 17 states throughout the US, according to The Washington Post.

After a widow put her $1.5 million mansion on the market, a group of 'sovereign citizens' moved in, changed the locks, and tried to claim it as their own

At least two of the squatters have since been arrested, including a dentist and a convicted sex offender, The Baltimore Sun reported.

In a now-revised blog post, Karen Taylor said her company sold a "modernized adaptation" of the traditional Asian dish "that doesn't seem foreign."