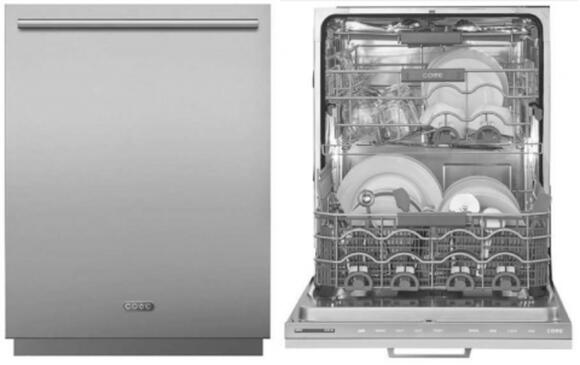 According to the recall notice, issued Wednesday, if the heating element fails to properly shut off, the appliance can overheat and cause a fire.

The Madison, Wisconsin-based company has received no injury reports linked to the recall, but it has fielded five reports of burning smells, flames and smoking inside the dishwashers.

The affected dishwashers were sold at home appliance stores nationwide between February 2018 and May 2021 for between $2,400 and $2,500, the company stated.

Consumers are advised to stop using the recalled dishwashers immediately, unplug them from their power source and contact Cove Appliance to schedule a free repair. Cove Appliance will install a second thermal protection device and replace the dishwasher’s heating element, the recall notice stated.

Cove Appliance can be reached by calling 888-651-9376 from 8:30 a.m.to 5 p.m. CT Monday through Friday; via e-mail at support@coveappliance.com; or at coveappliance.com/recall; or at www.coveappliance.com and click “learn more” in the safety recall section for more information.

WRIGHTSVILLE BEACH, N.C. — A 15-year-old boy needed more than a dozen stitches after officials believe he was bitten by a shark while in the water at a North Carolina beach, WTVD reported. Wrightsville Beach Fire Department Chief Glen Rogers said it happened Tuesday afternoon. The teen’s family said he...

MARANA, Ariz. — An Arizona man died Thursday after being stung multiple times by a swarm of bees, authorities said. According to a tweet from Northwest Fire, three people are believed to have been stung “hundreds of times” after bees swarmed out of a large open hive in a tree. The hive weighed approximately 100 pounds, firefighters said.

ROSEMAN, N.C. — A Christian summer camp in North Carolina was the source of at least 75 cases of COVID-19 in more than a dozen states, health officials said. Officials are connecting the outbreak to staffers and campers who attended The Wilds camp near Roseman, North Carolina between June 28 and July 17, the Transylvania County Health Department said in a statement, according to ABC News.

CHARLOTTE, N.C. — In the restaurant industry, the hits just seem to keep coming. After weathering the shutdown and dining restrictions, a constant shortage of menu items and now a shortage of liquor are driving up the costs of meals. [ ALSO READ: Taco Bell menu affected by nationwide supply...

Michigan man run over after fall from Nashville party bus

NASHVILLE — A Michigan man is in stable condition after falling from a Nashville party bus, being knocked unconscious and run over by the transpotainment vehicle. The incident occurred at around 12:30 a.m. Thursday when the 22-year-old man, who has not been identified publicly, fell from the railing of the roofless party bus, landing on his face in the roadway, WKRN reported.

RALEIGH, N.C. — Channel 9 anchor Allison Latos has reported on several stories of people who claim a tea they drank to lose weight caused them to fail drug tests and lose their jobs. Allison -- the first reporter in the country to break the news of their claims -- has been pushing for answers for months, and recently tracked down the company’s CEO in North Carolina.

DALLAS — (AP) — Nearly one in five flight attendants say they have witnessed physical incidents involving passengers this year, and their union is calling for criminal prosecution of people who act up on planes. A union survey supports what airlines and federal officials have been saying: There has been...

Illinois woman facing charges after getting too close to grizzly bear, cubs in Yellowstone

An Illinois woman is facing a pair of federal charges after she was captured on video being charged by a grizzly bear while visiting Yellowstone National Park. Samantha Dehring of Carol Stream, Illinois, was among a small group of tourists who spotted a female grizzly and her two cubs on May 15 in the park’s Roaring Mountain section, the Billings Gazette reported.

NEW YORK — A celebrity sommelier with a stake in a popular Lower Manhattan wine bar is facing a litany of criminal charges, including arson. Fire officials announced Wednesday the arrest of Caleb Ganzer on two felony arson counts and several other crimes linked to three fires, The New York Times reported.

UNCC to require face masks in all indoor spaces on campus

CHARLOTTE, N.C. — The University of North Carolina - Charlotte announced that it will require face masks in all indoor spaces on campus starting Monday. The school said the decision comes after the rapid increase in COVID-19 cases, including the high rate of transmission in Mecklenburg County, according to health officials.