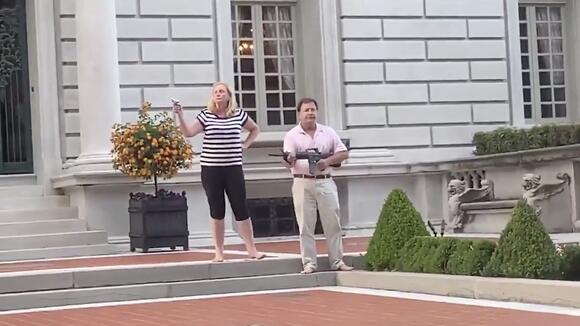 The St. Louis couple who pointed guns at Black Lives Matter protesters outside their home last year have pleaded guilty to misdemeanor charges over their actions.

Mark and Patricia McCloskey pleaded guilty on Thursday to misdemeanors and agreed to have their guns taken and destroyed, local Fox affiliate KTVI reported.

The incident happened in late June 2020 when Black Lives Matter protesters were walking through the couple's gated community and the couple came out of their house and waved guns toward the protesters.

The couple argued they were in fear for their life, saying the protesters broke down the gate to their community and violated a no trespassing sign. The protesters said they were peacefully protesting and denied they caused any damage to the community’s gate.

The couple has received support from Republicans, with former President Trump and other GOP politicians denouncing the charges against the couple when they were announced. Mark and Patricia McCloskey also spoke at the Republican National Convention last year.

Mark McCloskey is now running for a U.S. Senate seat in Missouri, a campaign he announced in May.

“America is at a crossroads. Do we want to preserve our traditions and our way of life, or do we want the cancel culture mobs to destroy everything we’ve built? After traveling across the great state of Missouri over the past 11 months, it’s clear Missourians want a fighter in the US Senate," he said in the announcement last month.

Haitian police are investigating what role a former Supreme Court judge may have played in the assassination of Haiti’s president following new developments announced on Friday, Reuters reported. A spokesperson for the National Police of Haiti said suspects arrested in connection to President Jovenel Moïse's murder — Haiti-Americans and Colombian...

Judge erupts at Jan. 6 defendant who refused mask: 'You don't make the rules'

A federal judge on Friday told off a Capitol riot defendant who refused to wear a mask during his hearing, telling the defendant “You don’t make the rules.”. The confrontation took place during a hearing for defendant Daniel Goodwyn, according The Washington Post. He pleaded not guilty in April to five charges in connection with the Jan. 6 riot.

The FBI in Washington has been investigating at least 41 incidents of eco-sabotage. The most serious eco-sabotage incident in recent memory as the damage resulted in 29,000 gallons of crude oil being spilled and the evacuation of 120 people nearby. As Indigenous rights and the climate crisis become infused, activists...

Protests erupted outside a Tulsa, Okla., cemetery on Friday as officials reburied the remains of 19 people previously exhumed in a search for victims from city’s 1921 race massacre. The demonstrators argued that the city should have held a funeral ceremony. The city began excavating portions of Tulsa's Oaklawn Cemetery...

A Colorado web designer has lost her challenge to Colorado's anti-discrimination law in a suit she filed against the state because she didn't want to design wedding websites for gay couples. The 10th U.S. Circuit Court of Appeals in Denver on Monday rejected the appeal from business owner Lorie Smith...