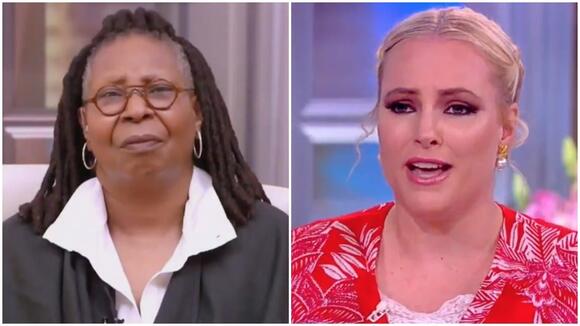 "The View" co-hosts Meghan McCain and Whoopi Goldberg got into a heated exchange Thursday after McCain criticized President Biden for snapping at a reporter following a press conference on his European trip the day before.

“Just because Trump was so bad, it doesn’t absolve Biden’s bad behavior," McCain said, referring to former President Trump 's often contentious interactions with the media. "What he just did was 100 percent Trump-y. I just think I would like a little intellectual consistency. If Trump had done that, we would be screaming at the top of our lungs ... one way or another."

Biden, at the end of a Geneva press conference after a high-stakes summit with Russian President Vladimir Putin, grew angry and shouted at CNN's Kaitlan Collins after she asked him what makes him confident Putin will change his widely condemned behavior.

"When did I say I was confident? What I said was ... what will change their behavior is if the rest of the world reacts to them and it diminishes their standing in the world," Biden said. "If you don't understand that, you're in the wrong business."

Minutes later, before boarding a plane to the United States, Biden apologized to the media for the outburst.

McCain, who said that members of the Washington, D.C., press corps are likely getting "sick of" Biden not being more accessible or only calling on preselected journalists, called the episode "unbecoming and ridiculous."

“It’s the press’s job to speak truth to power," she said. "And just because Biden has gotten a pass so far ... It is no one's best interest to continue to treat him like it's state TV."

"Yeah, the thing I never saw Trump do was apologize to anybody," Goldberg responded.

"With all due respect, I don't care that he's apologizing, he just embarrassed himself," McCain said as the two proceeded to talk past each other.

"I don't care that you don't care," Goldberg shot back.

"Well I don't care that you don't care, Whoopi, so we're even," McCain retorted.

Goldberg, sending the show to break, told McCain, "Well then, good Meghan, then you can be how you always are."

"You can be how you always are!" McCain responded.

McCain, the lone conservative Republican on the show, often argues with Goldberg and the more liberal members of the panel. In March, Goldberg went viral on social media for her reaction to comments McCain made about the bombshell interview that Meghan, the Duchess of Sussex , and Prince Harry sat for with Oprah Winfrey.

Meghan McCain may be fine with going head-to-head on The View, but that doesn’t mean she wants to see that happen anywhere else. On today’s episode of the ABC talk show, the co-host slammed a recent confrontation with Tucker Carlson in a fishing store, disagreeing with the other ladies who deemed the spat justifiable.

The View’s Meghan McCain on Monday dramatically denounced a Montana man who confronted Fox News star Tucker Carlson at a sporting goods store, describing the local fly-fishing guide’s actions as “incredibly dangerous” and comparing him to the congressional baseball shooter. In a video that he shared on his Instagram account...

A tabloid had a strong speculation about Meghan McCain's departure for "The View" and it claims it has to do with her never-ending feud with Joy Behar. Was it true?. Early July, Megan McCain herself announced that she would leave ABC's "The View" due to the pandemic "dramatically" changing how she wants to live her life. The announcement has shocked many as her contract still has two more years to go, according to Insider.

Report: Meghan McCain Quit ‘The View’ After Being ‘Exhausted’ Of Screaming Matches With Joy Behar?

Is Joy Behar the real reason behind Meghan McCain‘s exit from The View? That’s the story one tabloid is pushing this week. Gossip Cop investigates the rumor. Report Reveals Why Meghan McCain Is Leaving The View?. This week’s edition of Life & Style reports Meghan McCain is saying her goodbyes...

Meghan McCain Forced To Quit ‘The View’ By Co-Hosts?

Was Meghan McCain forced off of The View by her co-hosts? That’s what one tabloid would have readers believe. Gossip Cop investigates the rumor. According to this week’s edition of Star, Meghan McCain’s exit from the view may not have been as amicable as she made it out to be. The tabloid alleges McCain’s co-hosts “aren’t sorry to see her go.” The tabloid’s inside source dishes, “Everyone knows the ladies couldn’t stand Meghan.” The outlet rehashes the nasty arguments McCain has had with her co-hosts due to their opposing views. The magazine even references an incident shortly after McCain returned from maternity leave and Joy Behar told her on-air, “I did not miss you.”

Meghan McCain Spars With Co-Hosts Over Gun Rights on ‘The View’: “I Never Want to Be Lectured by People Who Don’t Own Guns”

Meghan McCain Threatens to Quit Twitter on the Same Day She Leaves 'The View': "It's Become a Noticeably More Darker, Uglier Place" There was quite a bit of tension on today’s episode of The View as co-host Meghan McCain found herself at odds with her fellow talk show hosts on the matter of gun rights in America. McCain was visibly rubbed the wrong way as Sunny Hostin, Ana Navarro, and the others took jabs at the NRA and the Second Amendment — but she wasn’t letting go of the argument without a few passive-aggressive comments of her own.

Some of TV's most dependable rivalries in recent years have been front and center on ABC's The View, but things could potentially become less nerve-grinding in the topical chat show's future now that Meghan McCain is making her exit going into the fall. Of course, that only holds true if the network replaces McCain with someone who won't dive right into butting heads with cohosts Whoopi Goldberg and Joy Behar. Before making any permanent replacement choice goes, though, it seems like The View will utilize a guest-host plan similar to how Jeopardy! has handled filling its Alex Trebek void.

Meghan McCain on Pelosi, McCarthy fight: 'I think they're all bad'

"The View" co-host Meghan McCain blasted House leaders of both parties on Thursday after tensions erupted the day before over a the lower chamber's select committee on the Jan. 6 insurrection. House Speaker Nancy Pelosi (D-Calif.) this week rejected two of the GOP members — Reps. Jim Jordan (Ohio) and...

‘The View’ in No Rush to Replace Meghan McCain, But Want a Conservative

Meghan McCain’s vacant seat on “The View” will be filled by another strong, conservative woman, but they’re also in no hurry to make the decision … sources close to the talk show tell TMZ. As we reported … Meghan announced she was leaving “The View” on July 1 following a...

Is it true Meghan McCain shocked her View co-hosts by announcing her impending departure on-air? That’s the story one tabloid is pushing this week. Gossip Cop investigates. ‘Rabid Right-Winger’ Meghan McCain Leaves Over ‘Firestorm Of Controversy’?. This week’s edition of the Globe reports that Meghan McCain is fleeing The View...

Sunny Hostin and Meghan McCain want new rules for social media that would strip all users of anonymity. The co-hosts of ABC’s “The View” made the comments Wednesday after colleague Whoopi Goldberg discussed racist posts directed at Black athletes competing in the Euro Cup. “I think this is a terrific,...

Meghan McCain, the conservative panel member of the daytime talk show The View, has defended Fox News amid criticism that the right-leaning network has undermined trust in the COVID-19 vaccine. The View's panelists discussed vaccine misinformation on Monday. Fellow panelist Sunny Hostin mentioned a July 16 study from the media...

"The View" co-host Meghan McCain claimed Thursday that she offered to assist President Joe Biden's administration with outreach on coronavirus vaccination rates in an effort to convince more people who identify as Republicans to get vaccinated. During a discussion on vaccination rates, the lone Republican on the program told her...

It was recently reported that Meghan McCain would be leaving talk show The View after being on the show for four years. What made the show so successful was, arguably, the heated disputes and arguments between McCain, a conservative woman, and her liberal co-hosts Joy Behar and Whoopi Goldberg. With...

When is Meghan McCain’s last day on The View?

MEGHAN McCain abruptly announced her departure from The View on July 1. McCain joined join The View in October of 2017 and has stayed for a total of four seasons. Meghan McCain live blog for the very latest news and updates... When is Meghan McCain's last day on The View?

FANS of Meghan McCain are familiar with her husband Ben Domenech, who frequently appears on her Instagram page in sweet photos. The View co-host - who is leaving the show - and the conservative politics writer tied the knot in 2017 weeks after she announced their engagement. Meghan McCain live...

Joy Behar leaves fans of The View amused with reaction to Meghan McCain’s departure: ‘She is all of us’

People are expressing their amusement over Joy Behar’s reaction to Meghan McCain’s announcement that she will be exiting as a co-host on The View after four years.On Thursday, McCain, who reportedly still had two years remaining of her contract, announced her imminent departure from the talk-show on-air, where she revealed that it had been a difficult decision.After briefly touching on her reasons for leaving, and expressing her gratitude and appreciation of the show and her co-hosts, the outspoken conservative then told the other hosts and viewers: “And I will still be here another month, so if you guys want to...

At the start of Thursday's show, Meghan McCain announced that she was leaving The View once the season wraps at the end of July. Rumors of Meghan's exit have been a constant throughout her four-season run, but now the conservative-leaning co-host is making things official. Her announcement follows years of speculation, dating back to 2019 when The Daily Beast reported that Meghan was feeling "emotionally drained, angry, and isolated" and like "a caged animal." But even though her quarrels with co-hosts make headlines, Meghan confirms that her decision has nothing to do with the other women on the panel; she's simply ready to move on.

It's the end of an era. Meghan McCain, daughter of senator and former presidential hopeful John McCain, is leaving "The View." The political daughter and Olympic-level hot-take-generator announced on the show that she had decided to move on after four years, citing her reason for leaving as wanting to be in Washington, D.C. full-time with her husband, their young daughter, and friends.