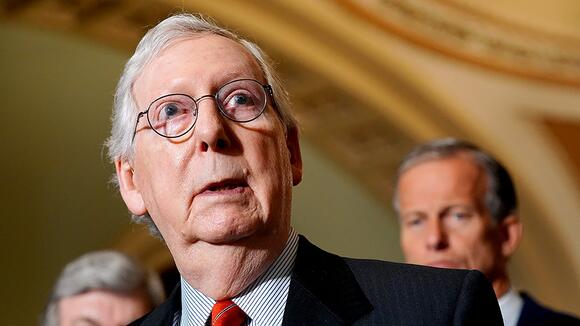 "I would make this observation about the revised version ... all Republicans I think will oppose that as well if that were to be what surfaced on the floor," McConnell told reporters, referring to Manchin's proposal.

McConnell's comments, which came during a press conference with GOP senators railing against the For the People Act, are the latest signal that the election bill will fail during a procedural vote next week due to a GOP filibuster.

Senate Majority Leader Charles Schumer (D-N.Y.) has teed up the bill for a vote early next week, where it will need 60 votes to advance. Schumer said said the bill could be a vehicle for a deal with Manchin, if it comes together.

Manchin has said that he opposes the For the People Act as it was introduced. The version Democrats are bringing to the floor is slightly revised, giving states and localities more time to implement the provisions. It does keep the original bill largely intact.

Manchin has also said he doesn’t support the revised version and instead has circulated a list to his colleagues detailing what he supports, and doesn’t support, in the bill.

Manchin also, according to a version of the list obtained by The Hill, backs tighter campaign finance requirements currently in the For the People Act. This would include requiring online and digital ads to disclose their funding sources in a way similar to TV and radio ads, as well as tighter ethics requirements for presidents and vice presidents and requirements that campaigns and committees report foreign contacts.

“I’ve been working across the aisle with all the Republicans trying to get people to understand that that's the bedrock of our democracy, and accessible, fair and basically secured voting,” Manchin said Thursday.

Senate Democrats reportedly booed their fellow Sen. Joe Manchin, D-W.Va., after he mentioned the national deficit during a Tuesday caucus luncheon. Though it's not clear why he brought up the sore subject, Politico, the first to report the incident, speculated that it may be related to concerns around the $3.5 trillion price tag of the Senate Democrats' infrastructure reconciliation bill – a number that Manchin has suggested is far too lofty.

Even the Senate minority leader's No. 2 didn't know until the last minute where he would land. His fellow Republicans still aren't sure.

Senate Minority Leader Mitch McConnell (R-Ky.) is urging his fellow Republicans to buck up Sen. Kyrsten Sinema of Arizona — a Democrat, sources familiar with the conversations tell Axios. Why it matters: Republicans view Sinema and her moderate Democratic colleague Sen. Joe Manchin of West Virginia as their last line...

On Thursday night, as President JOE BIDEN boarded Marine One, he made some news. — First, he reiterated that immigration reform should be included in the reconciliation bill. It’s a position he’s staked out before — Sarah Ferris, Burgess Everett and Laura Barrón-López first reported the White House supported the approach July 15 — but this is the first we’ve heard about it since there was movement on the bipartisan infrastructure framework. (Worth remembering: For this to happen, Dems would need a favorable ruling from the Senate parliamentarian, which hasn’t happened yet.)

The Senate voted on Friday to formally start debating a bipartisan infrastructure proposal after a last-minute snag briefly threw the chamber into chaos. Senators voted 66-28 to start debate. Senators are using a shell bill that they intend to swap the bipartisan group’s legislation into once it is finished. Sixteen...

Was Joe Manchin Booed in a Jokey Way, or for Real?

This is the first edition of Sinemanchin Watch, a recurring feature in which we will track the most recent developments in the lives of Democratic Sens. Kyrsten Sinema and Joe Manchin, who by nature of their proudly centrist politics in a 50–50 Senate get to decide the future of the planet and everything living on it. Good work if you can get it!

Democrats say they have the votes to advance $3.5T budget measure

Senate Democrats say they have the votes needed to pass a $3.5 trillion budget resolution, which would green light a massive spending measure packed with President Biden ’s top legislative priorities. In addition to the $1.2 trillion bipartisan deal currently being debated by the Senate, Democrats are expected to try...

House Speaker Nancy Pelosi, D-Calif., and Senate Majority Leader Chuck Schumer, D-N.Y., visited the White House on Friday afternoon to discuss narrower voting rights legislation. The meeting between the Democratic leaders and the Biden administration comes as both House and Senate Democrats seek to advance a slimmed-down package. In the...

CNN — Senate Democratic leaders are growing increasingly confident that they will lock down support for the crucial first step to advancing President Joe Biden’s multi-trillion dollar economic package after West Virginia Sen. Joe Manchin signaled on Thursday that he is in favor of pressing forward. Manchin told CNN that...

Former President Donald Trump decried Senate Minority Leader Mitch McConnell for his "weak leadership" of the Republican Party. "Under the weak leadership of Mitch McConnell, Senate Republicans continue to lose. He lost Arizona, he lost Georgia, he ignored Election Fraud and he doesn’t fight," Trump said Thursday. "Now he’s giving Democrats everything they want and getting nothing in return."

Schumer: Senators will ‘get the job done’ on infrastructure

WASHINGTON — The Senate convened for a rare weekend session on Saturday, with Senate Majority Leader Chuck Schumer encouraging the authors of a bipartisan infrastructure plan to finish writing their bill so that senators can begin offering amendments. Several senators had predicted that the text of the bill would be...

Top Senate Democrats are nearing a deal for the passage of the For The People Act, a landmark piece of elections legislation that many Democrats warn is necessary to fight back against GOP-led efforts in state legislatures around the US to make it harder to vote. Senator Amy Klobuchar revealed...

Former President Donald Trump rebuked Senate Minority Leader Mitch McConnell on Thursday for helping advance the White House’s $1.2 trillion infrastructure package. Mr. Trump, who many still view as the leader of the Republican Party, said Mr. McConnell’s support for the deal was just the latest example of how the Kentucky Republican “doesn’t fight” for his party.

McConnell's approval comes after Sens. Portman and Sinema met with President Biden last month to negotiate the framework of the infrastructure deal.

The Senate voted to move ahead with a bipartisan infrastructure bill. Senate Majority Leader Chuck Schumer aims to pass the plan as soon as next week. The votes were part of Democrats' effort to approve a sweeping economic agenda in the coming months. The Senate voted Friday to move forward...

Doug Jones: Pass 'Manchin Plus' voting and election protection with or without Republicans

I implore my former Republican colleagues to step forward. If they don't, Manchin and other Democrats must override the filibuster to save democracy.