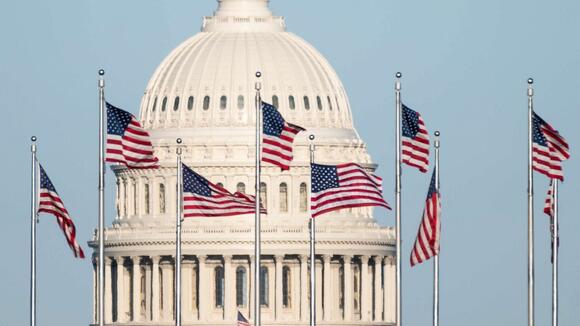 The House voted Thursday to repeal the 2002 Authorization for Use of Military Force, a nearly two-decade old war powers measure that gave clearance to then-President George W. Bush's plans to invade Iraq .

The 2002 AUMF allows military action to “defend the national security of the United States against the continuing threat posed by Iraq.”

49 Republicans joined nearly all Democrats in voting for the bill, which now heads to the Senate.

"Today the House confirmed, in a bipartisan way, that the repeal of an authorization for use of military force that is no longer applicable does not impede our national security. Circumstances on the ground in Iraq have changed dramatically since passage of the 2002 AUMF. Significantly, we now count the democratic Iraqi government our partner in our counterterrorism mission – as such, it is time to repeal this authority," House Armed Services Committee Chairman Adam Smith, D-Wash., said in a statement Thursday.

“While today’s vote moves us one step closer to a full repeal of this outdated AUMF, there is more work to be done. I have said before that repeal of the 2002 AUMF is not enough. I continue to be encouraged by the Biden-Harris Administration’s willingness to address outdated authorities. I look forward to working with the Administration and with my colleagues in Congress in reviewing existing authorities," he said.

Lawmakers have in recent years attempted to reign in wide-ranging authorities given to the president after the 9/11 terror attacks. The Trump administration cited the 2002 AUMF in part for its legal justification in the 2020 drone strike that killed Iranian Gen. Qassem Soleimani.

The 2001 AUMF - issued to allow the president to order the invasion of Afghanistan - is still in effect. Lawmakers hope to repeal this order soon, as well.

The House voted last year and in 2019 to repeal the 2002 AUMF, but it was never given a vote in the Senate, which was controlled by Republicans at the time.

Senate Majority Leader Chuck Schumer on Wednesday signaled that he supported a repeal of the 2002 AUMF and said he planned to bring the measure to a vote this year.

With the Iraq War over for nearly a decade, the 2002 authorization, and its use as a primary justification for military action, has lost its vital purpose, Schumer said this week.

WASHINGTON (AP) — President Joe Biden on Friday signed emergency legislation that will reimburse more than a half-billion dollars the National Guard spent on protecting the Capitol after the violent Jan. 6 insurrection and increase the number of visas for allies who worked alongside Americans in the Afghanistan war. The...

In mid-July 2021, a bipartisan and ideologically diverse group of senators proposed a new bill that, if passed, would dramatically shift the relative amount of power the president and Congress have over U.S. military operations. Whether this bill passes as is, or with significant changes, or not at all, its...

WASHINGTON — Congress overwhelmingly passed emergency legislation Thursday that would bolster security at the Capitol, repay outstanding debts from the violent Jan. 6 insurrection and increase the number of visas for allies who worked alongside Americans in the Afghanistan war. The $2.1 billion bill now goes to President Joe Biden...

WASHINGTON (Reuters) – The U.S. Senate on Thursday approved emergency funding to replenish the Capitol Police and bolster security after the Jan. 6 riot by supporters of then-President Donald Trump and to evacuate Afghans who helped American forces from their country. The $2.1 billion bill was passed by the Senate...

WASHINGTON (Reuters) – The U.S. Senate was poised on Friday to vote to begin debate on a $1 trillion bipartisan infrastructure bill that is one of Democratic President Joe Biden’s top domestic priorities. The result of months of talks between senators and the White House, the plan https://www.reuters.com/article/usa-biden-infrastructure-details/factbox-whats-in-the-us-senates-bipartisan-1-tln-infrastructure-plan-idUSL1N2P52EF includes funding...

The House overwhelmingly passed legislation on Thursday to allow thousands of more Afghans who worked alongside U.S. forces to seek safe refuge in America and avoid retaliation from the Taliban. The ALLIES Act passed in a 407-16 vote and now the legislation heads to the Senate. Lawmakers stressed the urgency...

Senate Foreign Relations Committee Chairman Robert Menendez on Thursday bowed to Republican pressure and delayed a vote to repeal the president’s war powers granted for the two Iraq wars. Mr. Menendez, New Jersey Democrat, acquiesced to Republican demands for a public hearing on the move, which they argue would handcuff...

‘We, the people of the United States, believe that our exalted leader should do as he pleases when it comes to foreign affairs, no matter what the citizens’ representatives in the Congress may think.”. No, that’s not right. That’s not right at all. In our nation, we don’t have an...

FLIPPING THE SCRIPT: Utah Republican Sen. Mike Lee, a longtime advocate of reining in the power of the president to wage war without congressional authorization, has joined Democrat Chris Murphy and independent Bernie Sanders in sponsoring a Senate bill to strengthen the 1973 War Powers Resolution, which presidents since Richard Nixon have largely ignored and argued is unconstitutional.

Earlier today, an unlikely coalition of senators introduced a bipartisan bill that would impose significant curbs on presidential power to initiate armed conflict and declare "national emergencies." Neither idea is entirely new. But this proposal is distinctive because of its broad reach, and its combining of the two issues in one bill. The Washington Post summarizes the bill's war powers provisions:

A group of lawmakers who have waged a yearslong campaign to rein in presidential war powers are now going on the offensive, unveiling a bill that would drastically reshape Congress’s role in authorizing war, national emergencies, and U.S. arms sales worldwide. The bill, introduced by Sens. Chris Murphy, a Democrat,...

Senators hope to wrap up draft of infrastructure bill Sunday

Republicans push back against Nancy Pelosi's mask-wearing orders: 'She has gone totally nuts'

A core function of democracy, voting has always been messy. In our nation’s infancy, the founding fathers wrestled with enfranchising only landowners vs. allowing for more populist decision-making. Many had strong opinions both ways, but either way, the voters would share the characteristics of being white and male. Over time,...