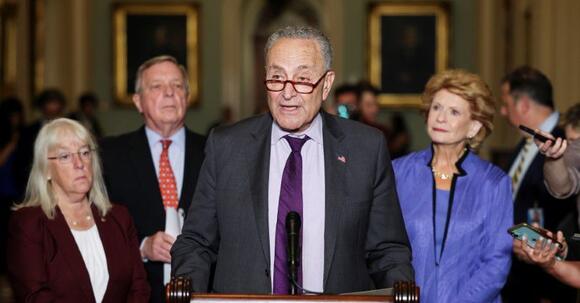 WASHINGTON, June 17 (Reuters) - U.S. Senate Majority Leader Chuck Schumer on Thursday met with members of a bipartisan group of senators struggling to develop an infrastructure proposal that could make it through Congress while achieving President Joe Biden's goals.

Twenty-one of the 100 senators, including 11 Republicans, nine Democrats and one independent who caucuses with Democrats have joined on the bipartisan proposal, building out a framework that sources said would cost $1.2 trillion over eight years.

That falls short of Biden's current $1.7 trillion proposal on infrastructure investment, which includes massive spending to fight climate change and provide more care for children and the elderly. Progressive Democrats in Congress said they may not support a package that does not address those priorities.

Senator Bernie Sanders raised eyebrows on Thursday by saying he is drafting an infrastructure package of up to $6 trillion, beyond even Biden's initial ask. That measure was sure to be rejected by Republicans and it was unclear how much support it would gather among Democrats.

A draft proposal of the bipartisan deal being circulated among members of the group includes $579 billion in new spending, to be paid for in part by unspent COVID-19 relief funds, public-private partnerships and an infrastructure financing authority.

The bipartisan plan would be funded by a variety of revenue-raisers. Some of them have been controversial, including indexing the gas tax to inflation. Sources familiar with the negotiations stressed that the document was a draft put together by one member for consideration, and there have been no final decisions.

Schumer said Democrats were working on two infrastructure "tracks" - a bipartisan bill and a larger one that could be passed with only Democratic votes using a process called "reconciliation."

Rep. Chip Roy of Texas tweeted out the names of the Republican senators who unsuccessfully voted against a proposal that would make women eligible for a military draft on Monday. He also included the names of Republicans who voted "yes" or "not present" on the proposal, which was part of the larger annual defense bill approved by the Senate Armed Services Committee on July 21.

Corporate media and Big Tech colluded with the Democratic Party to gaslight the country into electing Joe Biden as a return to normalcy. Six months in, the country is getting that normalcy, and they’re getting it good and hard — but without any of the Barack Obama packaging of “hope” that sold it in the first place.

Former President Donald Trump lambasted Republican leadership for working with Democrats in what he described as the "so-called 'bipartisan' infrastructure bill." In a statement, paid for by his Save America PAC, Trump wrote that Senate Minority Leader Mitch McConnell and his group of "RINOS" (Republicans in name only) want to complete the deal done "at any cost" to show they can work with the "Radical Left Democrats."

Sen. Rob Portman Says GOP, Dems About '90 Percent Of The Way There' On Infrastructure Deal

As Senators look to finalize a bipartisan infrastructure deal as early as Monday afternoon, GOP Sen. Rob Portman said that the negotiating Republicans and Democrats are "about 90 percent of the way there," the Associated Press reported. Sen. Mark Warner of Virginia, a Democrat, also expressed hope that both sides could settle the agreement by Monday afternoon.

WASHINGTON (AP) — Senators and the White House are locked in intense negotiations to salvage a bipartisan infrastructure deal, with pressure mounting on all sides to wrap up talks and show progress on President Joe Biden’s top priority. Despite weeks of closed-door discussions, senators from the bipartisan group blew past...

This is a rush transcript from "Your World with Neil Cavuto," July 26, 2021. This copy may not be in its final form and may be updated. SANDRA SMITH, FOX NEWS ANCHOR: Inflation? What inflation?. With prices spiking for everything from gasoline and used cars to fruits and vegetables, even...

8 US attorney picks by Biden would include historic firsts

WASHINGTON (AP) — President Joe Biden is nominating eight new leaders for U.S. attorney positions across the country, including in the office overseeing the prosecutions of hundreds of defendants charged in the Jan. 6 insurrection at the Capitol. The nominees announced by the White House on Monday come as the...

Manchin weighs another term as his influence peaks

WASHINGTON — The bipartisan infrastructure deal appeared to be on shaky ground Monday as Democratic and Republican negotiators struggled to reach agreement on lingering disputes, most notably how much money to spend on public transit. A bipartisan group of senators struck a deal in June with President Joe Biden that...

President Joe Biden's bipartisan infrastructure deal is in a perilous state with Republicans and Democrats remaining far apart on a range of outstanding issues after the latest round of furious talks, the clearest sign yet that one of the White House's top legislative priorities could collapse in the coming days.

The Ted Lasso of the Senate

INFRASTRUCTURE SWEEPS WEEK — Members of Congress — and I promise this isn’t just flattery — have a lot in common with business tycoons and sports coaches. All three spend a fair share of their time closing deals, inspiring teams, and at times knifing their rivals. So perhaps it’s no...

WASHINGTON (AP) — Lawmakers racing to seal a bipartisan infrastructure deal early this coming week are hitting a major roadblock over how much money should go to public transit, the group’s lead Republican negotiator said Sunday. As discussions continued through the weekend, Ohio Sen. Rob Portman said both sides were...

Republican Sen. Rob Portman (Ohio), the lead GOP negotiator on infrastructure, said Sunday that he is “not happy” about Speaker Nancy Pelosi ’s (D-Calif.) plan to delay a vote on the bipartisan infrastructure deal until a larger reconciliation package is passed. “The infrastructure bill has nothing to do with the...

CNN — Pennsylvania Sen. Pat Toomey on Sunday warned against treating federal funding as “Monopoly money” as negotiations on how to pay for a bipartisan infrastructure bill ramp up ahead of a critical week. “A very, very important category for me is how all this is going to get paid...

A bipartisan infrastructure bill is almost complete and ready for consideration by the Senate, according to updates provided by several of the key players involved. Two of the senators who have been part of the negotiations said Sunday that almost all of the pertinent issues have been discussed and agreed upon by members of both parties.

Democratic negotiator: 'I believe we will' have infrastructure bill ready on Monday

Sen. Mark Warner (D-Va.), a member of the bipartisan group of senators working on a massive infrastructure bill, on Sunday said he believes the legislation will be ready on Monday after it failed a first vote on the Senate floor last week. Appearing on "Fox News Sunday," Warner was asked...

Senate negotiators are finalizing how to pay for the $579 billion bipartisan infrastructure package, tapping everything from unused 2020 COVID-relief funds to targeting the Medicare rebate rule, people familiar with the matter tell Axios. Driving the news: The core group of negotiators plans to present a finished version of their...

Democrats are bracing for a slog as they try to craft a sweeping $3.5 trillion spending plan that is the key to President Biden 's legislative agenda. Though much of the public focus has been on separate bipartisan talks on a $1.2 trillion deal — which one senator characterized as the “easiest part” of the two-track strategy because of its narrow focus — big headaches await Democrats on their go-it-alone strategy for their larger bill that faces intense GOP opposition.