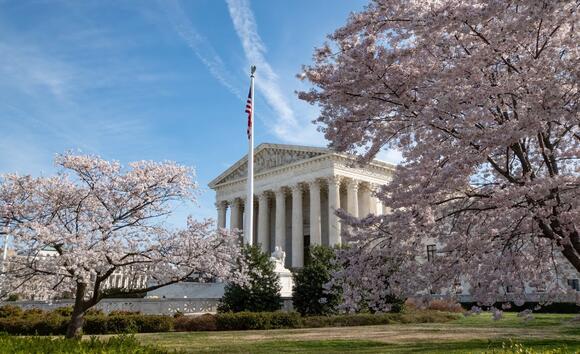 The Supreme Court unanimously ruled on Thursday that the city of Philadelphia ran afoul of religious protections when it cut ties with a Catholic adoption agency over its refusal to place foster children with same-sex couples.

“CSS seeks only an accommodation that will allow it to continue serving the children of Philadelphia in a manner consistent with its religious beliefs; it does not seek to impose those beliefs on anyone else," Roberts wrote. "The refusal of Philadelphia to contract with CSS for the provision of foster care services unless it agrees to certify same-sex couples as foster parents cannot survive strict scrutiny, and violates the First Amendment."

The decision continues the conservative-majority Supreme Court’s trend in recent years of giving a largely sympathetic audience to groups seeking exemptions from the law on religious grounds.

Some LGBT rights groups, while disappointed, expressed relief that the majority kept the ruling relatively narrow in scope.

The dispute arose when Philadelphia stopped working with the foster agency after learning the group’s religious convictions barred it from placing children in the homes of gay and lesbian couples and determined the agency's refusal violated the city's nondiscrimination ordinance.

A lower federal appeals court had ruled against the agency, finding that Philadelphia had acted lawfully by enforcing its nondiscrimination policies.

But the Supreme Court’s ruling Thursday reversed the lower court. Roberts, in his opinion, wrote that the city had placed an unlawful burden on the Catholic agency.

“[I]t is plain that the City’s actions have burdened CSS’s religious exercise by putting it to the choice of curtailing its mission or approving relationships inconsistent with its beliefs,” Roberts wrote.

The majority concluded that Philadelphia’s interest in ensuring the equal treatment of prospective foster parents and foster children, while "weighty," was not a sufficient reason to deny the Catholic group an exception from its policy.

Although the ruling was a victory for religious rights advocates, the court stopped short of fundamentally reshaping its approach to religious liberty disputes, to the chagrin of the court’s most steadfast conservatives.

Alito, in a 77-page concurring opinion joined by Thomas and Gorsuch, criticized the majority's reasoning and said he would have used the case to upend the court’s longstanding precedent on Free Exercise claims.

“After receiving more than 2,500 pages of briefing and after more than a half-year of post-argument cogitation, the Court has emitted a wisp of a decision that leaves religious liberty in a confused and vulnerable state,” Alito wrote. “Those who count on this Court to stand up for the First Amendment have every right to be disappointed — as am I.”

“Today’s ruling by the Supreme Court is troubling but, importantly, it refused to give a free pass to people or agencies that want to discriminate against LGBTQ people for religious reasons and is limited to the specifics of Philadelphia’s foster care system,” Cook said. “Instead, the Court validated the City’s ‘weighty’ interest in the equal treatment of LGBTQ prospective foster parents and foster children. The only reason those interests did not carry the day was due to the specifics of the City’s contract.”

The American Civil Liberties Union (ACLU) is reviving a lawsuit challenging the government's use of a public health authority to quickly expel people crossing the Southern border, preventing them from seeking asylum. The suit was filed against the Trump administration, and the ACLU agreed to stall it when President Biden...

A federal appeals court is siding with Indiana University over its requirement that all students next semester be vaccinated against COVID-19 or wear masks if they cannot get the shots for religious or medical reasons. A group of eight students at Indiana University had sued the school over the policy,...

A man who was charged after storming the U.S. Capitol on Jan. 6 was turned in by his coworkers who said he bragged about his experience participating in the attack. Donald Smith was arrested on Thursday and charged with knowingly entering or remaining in a restricted building without authority, disorderly and disruptive conduct in a restricted building, violent entry and disorderly conduct on Capitol grounds and parading, demonstrating, or picketing in a Capitol building.

Trump attorney says he will fight release of tax returns

An attorney for former President Trump says he will fight to block the release of his tax returns days after the Department of Justice ordered them turned over to the Democratic-led House Ways and Means Committee. “There is no evidence of any wrongdoing here and I object to the release...

Former Illinois Gov. Rod Blagojevich (D) said he is going to sue the state in an attempt to run for office again. In an interview with ABC News affiliate WLS-TV on Sunday, Blagojevich told the station that he has filed a lawsuit against the state of Illinois, claiming that the methods used against him by the state’s General Assembly violated his constitutional rights.

More than 100 state legislators are slated to join Texas House Democrats in Washington, D.C., on Monday, as the lawmakers push for federal voting reform. The lawmakers from nearly 30 states will participate in a “Week of Action” to demand President Biden and the Senate “do whatever it takes to immediately pass the For the People Act,” the sweeping voting right legislation championed by Democrats that was blocked by Senate Republicans.

Maricopa County and Dominion Voting Systems have both refused to comply with a subpoena from the GOP-controlled Arizona state Senate demanding that representatives from the county and the company produce materials as part of its audit of the 2020 presidential election. The Arizona Republic reported that the Maricopa County Board...

Two special House primaries in Ohio Tuesday have emerged as potential predictors of whether the centrist or more ideological wings of both the Democratic and Republican parties hold more sway heading into the 2022 midterms. A special election in a red district near Columbus for the seat vacated by former...

The Washington Examiner is requiring employees to be vaccinated against the coronavirus. Employees of MediaDC, the outlet's parent company, were sent guidance announcing a "mandatory COVID-19 vaccination policy," that went into effect on Monday, according to a memo reviewed by The Hill. All employees must provide proof of vaccination to...