By Nicholas Rowan
Posted by
WashingtonExaminer
2021-06-17 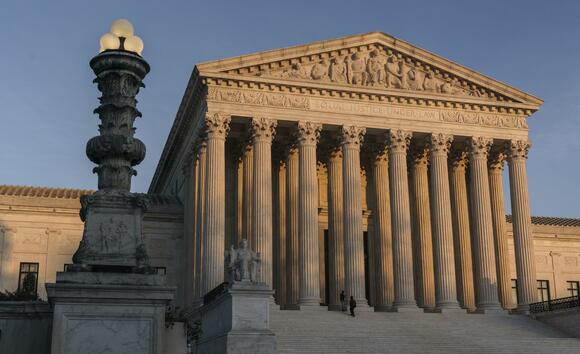 The Supreme Court on Thursday ruled for a Catholic-run foster care agency in a dispute over Philadelphia's nondiscrimination policy against gay and transgender people.

The court found that Philadelphia had violated the free exercise clause of the First Amendment by refusing to contract with Catholic Social Services in the placement of foster care children. Chief Justice John Roberts delivered the opinion of the court. No justices dissented. A number of justices, including Justices Amy Coney Barrett, Samuel Alito, and Gorsuch, filed concurrences.

ALL EYES ON BARRETT AS SUPREME COURT WRAPS UP TERM

Roberts wrote in his opinion that Philadelphia's policy, which was adopted after the landmark gay marriage decision Obergefell v. Hodges , violated the First Amendment because it was neither "neutral and generally applicable." Philadelphia directly targeted Catholic Social Services, he added, pointing out that the agency had never clashed with any couple before the city cut ties with it.

"Government fails to act neutrally when it proceeds in a manner intolerant of religious beliefs or restricts practices because of their religious nature," Roberts wrote, citing the court's decision in a case involving Colorado baker Jack Phillips , who has faced years of litigation over his refusal to bake wedding cakes for gay couples.

The case arose in 2018 after the Philadelphia Inquirer published an investigative piece revealing that CSS, which is run by the Archdiocese of Philadelphia, had a policy wherein it would not place children with gay or transgender foster parents. Philadelphia soon cut ties with CSS, which was one of the largest foster care providers in the city.

An appeals court sided with Philadelphia. The Supreme Court heard the case in November, a day after the presidential election. Both sides framed the case as a clash between religious liberty and a philosophy of equality that ascended with Obergefell .

Justice Brett Kavanaugh, during his questions, pointed out that these warring factions seem to be on a collision course in which every case is "sensitive and controversial." The court's job, he said, was to find a middle way. Kavanaugh added, however, that in Fulton , it appeared that Philadelphia was "looking for a fight" because prior to the Philadelphia Inquirer's investigation, the city never received a complaint from a gay or transgender couple.

Although Roberts handed a win to Catholic Social Services, he slapped down a push from fellow conservatives to use the case to overturn Employment Division v. Smith , a landmark 1990 case in which the court found that laws that are generally applicable do not violate the First Amendment. That decision has been increasingly called into question as a number of states pass laws raising conflicts between religious and gay rights interests. Roberts wrote that Smith did not apply here because Philadelphia's policy was not neutral.

Several justices said they wanted to revisit Smith . In her concurrence, Barrett wrote that she had found "compelling" reasons to overturn Smith . Still, she added, that since the case did not apply here, she joined the court's opinion in full. Alito also attacked Smith in a 77-page opinion, writing that the case is "ripe for reexamination."

Alito added that CSS's victory can be easily undone as long as Smith stands.

"This decision might as well be written on the dissolving paper sold in magic shops," Alito wrote of Roberts's opinion.

When the court accepted the case last year, a number of religious freedom attorneys expressed a hope that it help overturn Smith , which has long been seen as an impediment to religious liberty.

Still, even without that victory, the case vindicated the religious liberty cause, said Lori Windham, a senior counsel at the Becket Fund for Religious Liberty, who argued the case before the court.

"It’s a beautiful day when the highest court in the land protects foster moms and the 200-year-old religious ministry that supports them," she said.

Philadelphia City Solicitor Diana Cortes took the opposite opinion, saying in a statement to the Washington Examiner that the decision was a "disappointing setback" for the future of foster care in the city. At the same time, however, Cortes said that the city was grateful to the court for not overturning Smith .

Justice Clarence Thomas shut down an appeal to the Supreme Court challenging the Centers for Disease Control and Prevention's mandate requiring masks on public transportation.

Rep. Joyce Beatty, chairwoman of the Congressional Black Caucus, was one of several people arrested on Thursday afternoon after marching through the Hart Senate Office Building in protest of voting laws.

The civic shock of the Jan. 6 insurrection still roils Congress, but its sources and meaning go deep into the core of our government and its relationship to society. Given the political tumult, it would be easy to miss a tremor sent out by the Supreme Court. Late this term,...

WASHINGTON - As midnight approached on the eve of the U.S. Thanksgiving holiday, the conservative-majority Supreme Court granted emergency requests by Christian and Jewish groups challenging COVID-19 crowd restrictions imposed by New York state. The twin 5-4 decisions in favor of the Roman Catholic Diocese of Brooklyn and two Orthodox...

Opinion | What’s Behind the Conservative Rift on the Supreme Court

Many court watchers are still paying attention only to how liberal or conservative the justices are. But there’s another factor at work.

Religious freedom scholars and anti-discrimination attorneys are assessing the likelihood that the conservative majority on the U.S. Supreme Court may take up a major First Amendment decision out of Colorado, in which the state’s anti-discrimination law prevailed over a business owner’s religion-based objection to serving same-sex couples. “I believe that...

Noah Feldman: Amy Coney Barrett is trying to tell us something

One of the most anticipated cases of the U.S. Supreme Court term that ended this month was Fulton v. Philadelphia, which presented the conflict between the prohibition of discrimination against gay people and the religious liberty of the Roman Catholic Church. The court ruled unanimously that Philadelphia’s anti-discrimination laws as...

The Supreme Court’s 2020-21 term concluded in July with a newly expanded 6-3 conservative majority prevailing in several major decisions. The court showed surprising agreement as well on everything from ObamaCare to religious freedom to the 2020 elections. Fears of liberal activist groups, including the American Civil Liberties Union, that...

The unsettled constitutional question of whether creative professionals are required to take commissions for same-sex ceremonies, regardless of their religious views on such unions, could be headed back to the U.S. Supreme Court. And once again, it may be a Colorado case that gets it there. Unlike the 2018 Masterpiece...

No doubt about it: We have a pro-religious freedom Supreme Court

Last summer, I wrote, “The Supreme Court has never been more protective of religious freedom in its history.” This term, the court’s “pro-religion” streak has continued — and then some. First, there were the COVID-19 cases. Initially, the court was reluctant to grant emergency relief, declining to intervene in challenges...

Kyle Willis hadn't seen Kimberly Graham in years, since the day she was sentenced to 107 years in prison after she drunkenly plowed her truck into a group of motorcyclists in Tulsa, killing five people, including his mother and stepfather. So it was a shock when he saw her at...

Supreme Court ruling to have disparate impact on voting rights

“Disparate impact” is a short legal phrase with a long reach. For decades, it’s been used to reveal hidden racial discrimination in employment and housing laws and practices, and, until this month’s U.S. Supreme Court decision in the case of Brnovich vs. Democratic National Committee, it was a powerful tool for ferreting out voter suppression.

The Supreme Court, applying a doctrine that urges strict separation of authority among the federal government’s three branches, invalidated June 21 a statutory scheme that excludes politically-appointed functionaries from intellectual property disputes. The decision introduces uncertainty into a key process by which the validity of patents is determined. The case...

How the Supreme Court could decimate reproductive rights without overruling Roe

Steven Mazie is Supreme Court correspondent for the Economist and Melissa Murray is a professor of law at the New York University School of Law. In her opening brief in a challenge to a state abortion law now before the Supreme Court, the attorney general of Mississippi on Thursday asked the justices to take the plunge and overrule the court’s landmark 1973 ruling in Roe v. Wade.

The Supreme Court last month remanded a lower court's ruling that police officers who used excessive force on a 27-year-old man who died in their custody were protected because they didn't know their actions were unconstitutional. And it's a decision that could have lasting effects, according to legal experts including...

If you think that government experts should be free from political influence, then think again. Twice this June the Supreme Court ruled that the president could exert more control over regulatory agencies, the government institutions that are as important as they sound boring. While Congress may write laws, agencies are...