Putin weaponizes BLM, Jan. 6 in exploiting US divisions: The Note 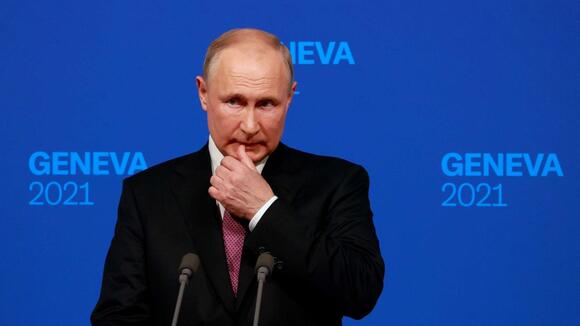 The TAKE with Rick Klein

It was a summit that might be remembered for its relative calm, with vague statements of optimism and a formal commitment to "stability," along with a joint affinity for quoting President Joe Biden's mom.

But beyond Russian President Vladimir Putin's refusal to take responsibility for aggressive acts on the international stage, up to and including attempts to interfere with American elections , Putin showed a keen understanding of U.S. domestic politics that will follow Biden back home.

Asked by ABC News congressional correspondent Rachel Scott about his efforts to silence political opponents , Putin responded with a pointed and false -- but still potent -- brand of what-aboutism. He attributed "destruction, violations of the law" to the Black Lives Matter movement -- and parroted misleading talking points in reference to Jan. 6.

"As for who is killing whom and throwing whom in jail, people came to the U.S. Congress with political demands," Putin said in response. "Some people died. And one of the people that died was shot on the spot by the police, although they were not threatening the police with any weapons."

Biden dismissed what he called a "ridiculous comparison." But if Putin's words sound familiar, it may because similar arguments have made their way from the far-right fringe into the mouths of pro-Trump Republicans, including some members of Congress who were themselves threatened the day of the attack on the Capitol.

After the summit , Biden emphasized repeatedly that it will take months or longer to determine success. In interactions with reporters before boarding his plane home, Biden seemed to bristle at any suggestion that he doesn't understand who he's dealing with when it comes to the Russian president.

Putin, meanwhile, showed an understanding if not of Biden than of the political world Biden inhabits. Much work remains on the diplomatic front -- and also at home.

The RUNDOWN with Alisa Wiersema

As the sole Democrat who is not fully backing his party's sweeping voting rights legislation , Joe Manchin is in a complicated position that he says he wouldn't wish on others.

"I do not like the situation I am in. I do not recommend this to anybody. But I have not changed my voting," Manchin told reporters on Wednesday.

In what appears to be an effort to get out of that unfavorable situation, Manchin is leaning into the possibility of a compromise . As reported by ABC News' Trish Turner, the West Virginia senator said he is open to supporting changes to the federal election legislation, while suggesting a slate of changes he wants to see included in the "For the People Act" before it is brought to a vote next week.

The proposed list of changes Manchin suggested in a memo to leadership includes a voter ID requirement, as well as a provision that would enshrine the purging of voter rolls. Both suggestions are likely to be met with strong pushback from his Democratic colleagues.

While it remains to be seen how the list of changes is received, the pressure to come to an agreement on a policy deemed a major priority by the White House is building.

During a meeting with Texas legislators who stalled the passage of an election overhaul bill in their state last month, Vice President Kamala Harris said she and Biden remain committed to passing both the "John Lewis Voting Rights Act" and the "For The People Act."

The TIP with Meg Cunningham

As Democrats in Texas head home to hit restart on potential voting reforms facing their state after a visit to Washington, Republicans in Pennsylvania are gearing up for tension with Democratic Gov. Tom Wolf to try and find common ground on voting legislation of their own.

Republicans are looking to reassess some of the state's voting provisions, and the ball is entirely in the governor's court. Many members of the state GOP participated in efforts to overturn the election and are still continuing calls for an additional "audit" of the vote. Wolf has been adamant about his opposition of the proposed changes, specifically singling out heightened voter identification requirements.

A sponsor of one GOP-led bill wrote to Wolf on Wednesday, asking him to be open to negotiate.

"To put it plainly, Gov. Wolf: How do you know what we are willing to change or compromise on in this bill if you will not come to the table?" Rep. Seth Grove said.

Wolf hasn't issued a reply to Grove, but did throw a subtle jab in a tweet Wednesday afternoon, saying, "The same lawmakers who turned their backs on the will of Pennsylvanians during the November elections are now pushing bills to create barriers for voters. I will not support any legislation that rolls back the voting freedoms and rights of our citizens."

WHAT YOU NEED TO KNOW TODAY

Download the ABC News app and select "The Note" as an item of interest to receive the day's sharpest political analysis.

The Note is a daily ABC News feature that highlights the key political moments of the day ahead. Please check back tomorrow for the latest.

Did Biden just commit an impeachable offense in Ukraine?

Remember when House Democrats impeached President Donald Trump for twisting the arm of Ukrainian President Volodymyr Zelensky, allegedly conditioning a White House visit on his willingness to investigate Hunter Biden? Well, guess what: Axios reports that the Biden administration may have twisted Zelensky’s arm to accept a deal President Biden just cut with Germany to allow it to move forward with its Nord Stream 2 pipeline with Russia — and conditioned a White House visit by Zelensky on acceptance of the deal.

Moscow Slams Senate Call to Free U.S. Prisoners in Russia, Says Look at Your Own Problems

The Russian Embassy in Washington, DC, said U.S. lawmakers should "address problems within their own country."

When Congress reconvened following the Jan. 6 riot at the Capitol, Democratic Speaker Nancy Pelosi and Republican House Administration Committee ranking member Rodney Davis met in the chamber and agreed that Congress should call for a bipartisan investigation into the unprecedented events of that day.

Deroy Murdock: Biden, Democrat policy failures – from crime to immigration, can Left get anything right?

From immigration to crime, energy and beyond, Democrats have the Midas touch in reverse: Everything they handle turns to manure. *Homeland Security Secretary Alejandro Mayorkas repeatedly has claimed that "the border is closed." Regarding the illegal-alien surge through Mexico, "we have seen extreme progress over these last few months," Vice President Kamala Harris insisted on June 25.

This is a rush transcript from "Life, Liberty & Lenin," July 25, 2021. This copy may not be in its final form and may be updated. MARK LEVIN, FOX NEWS HOST: Hello, America. I'm Mark Levin and this is LIFE LIBERTY & LEVIN. We have a very important show for...

POLITICO Playbook: Back to the Covid blues

What Democrats are doing is coalescing around a message -- arguing that falsehoods about the last election are driving changes in voting laws.

Vladimir Putin is the target of an unusual form of punishment. He reportedly maintains a program for assassinating dissidents with chemical agents, yet top European leaders cannot wait to embrace the former spy in a bear hug of engagement and recognition. Following his June summit with the Russian leader, Joe Biden spoke of Putin in sympathetic terms, despite claiming to have warned him about his provocative behavior. Such warnings ring hollow as Western leaders again allowed Putin to avoid accountability at last week’s meeting of the Organization for the Prohibition of Chemical Weapons (OPCW).

On Monday, publishing a nearly 7,000-word essay, Russian President Vladimir Putin warned Ukrainian leaders that they would "destroy their country" by moving closer to the West. As Putin put it, "All the tricks associated with the anti-Russia project are clear to us. And we will never allow our historical territories...

President Joe Biden delivered a major speech Tuesday from Philadelphia on voting rights as his administration wades more aggressively into the fight over ballot access.

Pelosi to blame for Capitol security 'breakdown' on Jan. 6, wants to 'stick to her narrative': Rep. Banks

House Speaker Nancy Pelosi, D-Calif., is responsible for the "breakdown" in security at the Capitol during a deadly riot on Jan. 6, and only wants to "stick to her narrative" as she appoints anti-Trump Republicans to the committee investigating the attack, Rep. Jim Banks said Sunday. Banks, R-Ind., made his...

‘An explosion is coming’: Biden races to unite allies against China

The US president is being much tougher than expected on Beijing, but a lack of solidarity will undermine his policy’s success

The leader of the New York State Assembly's impeachment investigation into Gov. Andrew Cuomo is warning of "severe repercussions" after a senior aide to the governor tweeted alleged "attempts to demean the Attorney General."