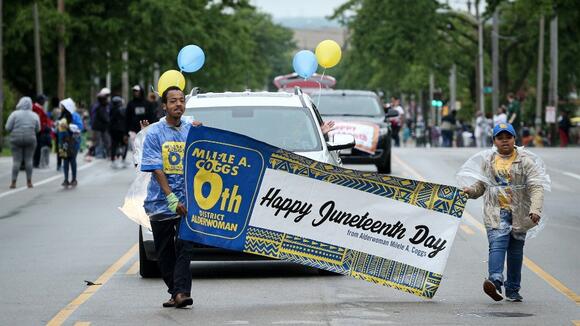 Juneteenth, the oldest known celebration of the end of slavery in America, is finally on the precipice of becoming a federal holiday, as the House on Wednesday passed the Juneteenth National Independence Day Act by a vote of 415-14.

All 14 "no" votes came from Republicans. Two members did not vote.

“What I see here today is racial divide crumbling, being crushed this day under a momentous vote that brings together people who understand the value of freedom,” Rep. Sheila Jackson Lee (D-Texas), the sponsor of the bill, said at a press conference with other lawmakers shortly before the vote.

One Republican, Rep. Matt Rosendale (Mont.), said ahead of the vote that making Juneteenth a federal holiday was "an effort by the left to create a day out of whole cloth to celebrate identity politics as part of its larger efforts to make Critical Race Theory the reigning ideology of our country," referring to discussions of systemic racism in schools.

The legislation passed through the Senate with unanimous consent on Tuesday; it now heads to President Biden ’s desk to be signed into law.

Juneteenth is a portmanteau of the date that it falls on, June 19. On that day in 1865, Maj. Gen. Gordon Granger of the Union Army issued General Order No. 3 from Galveston, Texas, informing the remaining enslaved people there that they were free.

The House vote operated under a closed rule that was ironed out by the House Rules Committee early Wednesday afternoon in an effort to stop any last-minute bad-faith efforts to stop the legislation from passing.

Juneteenth is getting its day in the sun, as racial justice and equity have dominated national discussion a year after the police murder of George Floyd in Minneapolis sparked a national reckoning with systemic racism and police brutality.

The conversation on how to address prevailing racism and disparities in the country is littered with numerous partisan battle lines, but establishing Juneteenth as a federal holiday has received relatively broad bipartisan support.

Between both the House and Senate, 20 Republicans co-sponsored the legislation, with conservative Sen. John Cornyn (R-Texas) being one of the main proponents.

“There's nothing more powerful than an idea whose time has come,” Cornyn said at the press conference with Jackson Lee.

“It seems to me that this is the most propitious time for us to recognize our history, and to learn from it, and that's the way I regard Juneteenth,” he added.

When the Emancipation Proclamation was put forth by former President Lincoln on Jan. 1, 1863, the Civil War was still in full swing, meaning that the declaration had no agency in states and areas that the Union Army did not control.

And even though the war officially ended on April 9, 1865, it would take Union troops another two months to make their way through Texas, which at the time was the most remote and westward state.

Granger and his troops arrived in the Port of Galveston on June 18, 1865, and a day later, he read the order emancipating all people in the state who were still enslaved.

The 13th Amendment, officially prohibiting slavery in the U.S., wouldn’t be ratified until December of that year.

While just now being recognized as a holiday on a federal level, Juneteenth is celebrated by many cities across the country as well as almost every state.

South Dakota is the only state that hasn’t officially recognized Juneteenth as a holiday.

Cristina Marcos contributed to this story.

WASHINGTON (AP) — Unable to produce the final text of a nearly $1 trillion infrastructure bill, the Senate wrapped up a rare Saturday session making little visible progress on the legislative package, but Senate Majority Leader Chuck Schumer vowed the work would get done. The Senate planned to reconvene Sunday....

Troubling drone footage emerged online Sunday that reportedly showed up to 1,000 migrants being held by border patrol in Mission, Texas, prompted criticism from Republicans who said the footage underscores the crisis at the border. "An absolute catastrophe from Joe Biden, Kamala Harris, and House & Senate Democrats," Rep. Elise...

While 51% of Voters Approve of Biden's Performance, Only 25% Approve of Congress

A recent study by the George Washington University Politics Poll shows that the majority of voters are in favor of President Joe Biden's performance as commander-in-chief, though the job Congress is doing is considerably less popular. The poll, which was released on July 26 shows that 51 percent approved of...

When a group of 22 senators negotiates a $1 trillion bill, conversations can go off track. And when they did — "far too many (times) to recount," joked one senior staffer — Arizona Sen. Kyrsten Sinema would urge them to finish the job, even if that required some liquid courage.

WASHINGTON — Unable to produce the final text of a nearly $1 trillion infrastructure bill, the Senate wrapped up a rare Saturday session making little visible progress on the legislative package, but Senate Majority Leader Chuck Schumer vowed the work would get done. The Senate planned to reconvene Sunday. Senators...

House Speaker Nancy Pelosi failed to push legislation through the House that would extend an eviction moratorium as part of a last-minute effort.

Liberal Democrats say a Senate plan to pass a two-part infrastructure and social spending package falls short, and they plan to seek changes if it reaches the House. “Right now, we are pushing for a little bit more,” said Rep. Pramila Jayapal, a Washington Democrat who heads the influential House Progressive Caucus. “Because if we really want to make a difference, this is what we are going to have to do.”

The 2,700-page bill will launch what is certain to be a lengthy debate over Joe Biden’s big priority

The House voted 416 to 11 on Thursday to approve a roughly $2 billion Capitol Hill security spending bill in response to the deadly January 6 insurrection, clearing the measure for President Joe Biden's signature.

Senate infrastructure deal is a win for bipartisanship, thanks to Sen. Sinema

I remember the angry texts, emails and calls. In April 2017, many of my Republican friends and constituents questioned why, only months after President Donald Trump was sworn in, I joined 60 of my Senate colleagues in sending a bipartisan letter to Senate leadership calling for the filibuster to be preserved. My GOP supporters wanted to know why I did not support a procedural change that would ultimately make it easier to pass Trump’s agenda.

Lawmakers voted overwhelmingly Thursday to approve a $2.1 billion spending bill meant to shore up their own safety in the wake of the Jan. 6 attack on the Capitol, reimburse the National Guard for a monthslong activation to secure the complex and relocate Afghans who helped the U.S. government during the war.

Representative Ilhan Omar, along with other progressive Democratic lawmakers, proposed legislation that would dole out regular stimulus checks—or guaranteed income—through monthly payments of up to $1,200 for adults and $600 for children. The Minnesota congresswoman announced the proposal on Friday, saying that "poverty is a choice" in a press release...

Representative Alexandria Ocasio-Cortez has spoken out against the Biden White House's stance on opposing Republican voter suppression. During a Sunday appearance on CNN's State of the Union, the progressive lawmaker said the approach "verges on naivete." Ocasio-Cortez specifically took issue with recent comments from White House officials saying that Democrats...

Susan Collins said Sunday that the group of bipartisan lawmakers negotiating a landmark infrastructure bill are "just about finished," and that it could be passed by the end of this coming week. The Republican senator—a member of the negotiating team—told CNN's Jake Tapper on Sunday she believes the bill will...

Optimism grows that infrastructure deal will get to Biden's desk

The Senate voted to begin debate on a bipartisan infrastructure package that has yet to be turned into legislative text, and that many senators have yet to see. Yet plenty of Democrats, Republicans and outside groups have been pressing for decades for such a deal, believe the big votes this week will pave the way for the long-sought-after package to win Senate approval, and eventually get to the White House for President Biden ’s signature.

The lapse of the moratorium this weekend meant millions of tenants around the country faced the risk of losing their homes.