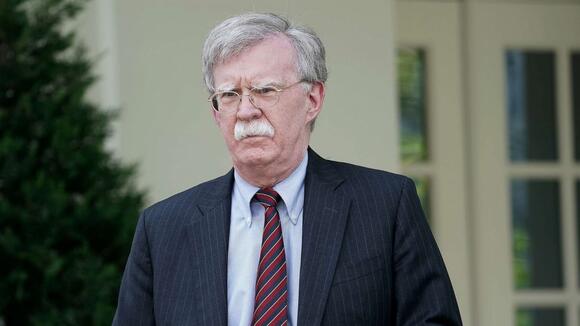 The Justice Department on Wednesday dropped its civil lawsuit targeting former national security adviser John Bolton over the publication of his 2020 memoir "The Room Where It Happened," halting an effort brought during the Trump administration that had sought to seize all proceeds Bolton received from the book.

The short filing, made Wednesday, only stated that "the parties stipulate to dismissal of this action, with prejudice."

"We are very pleased that the Department of Justice has dismissed with prejudice its civil lawsuit against Ambassador Bolton and has terminated grand jury proceedings," Charles Cooper, an attorney for Bolton, said in a statement. "We argued from the outset that neither action was justifiable, because they were initiated only as a result of President Trump's politically motivated order to prevent publication of the Ambassador's book before the 2020 election."

A separate criminal probe into whether Bolton illegally mishandled classified information by publishing the book has also been dropped, Cooper added in his statement. Last fall, grand jury subpoenas were sent to Bolton's publisher and his literary agent demanding their communications with Bolton.

Prosecutors suing Bolton alleged that multiple passages in the book included highly classified information that would cause irreparable harm to national security.

"The NSC has determined that information in the manuscript is classified at the Confidential, Secret and Top Secret levels," DOJ attorneys said in a June 2020 court filing.

Bolton has long maintained that he did not publish any classified material.

"We accordingly do not believe that prepublication review is required," Cooper wrote to the Trump administration National Security Council in 2019, ahead of the book's publication. "We are nonetheless submitting this manuscript out of an abundance of caution." Bolton's team and lawyers from the NSC went through a months-long back-and-forth review process of the memoir's contents.

A federal judge overseeing the case, Royce Lamberth, subsequently issued a ruling that seemed to spell trouble for Bolton, after officials briefed Lamberth in a private setting on specific passages of the book that they said included classified information.

MORE: Bolton: Trump's not 'fit for office,' doesn't have 'competence to carry out the job'

"This was Bolton's bet: If he is right and the book does not contain classified information, he keeps the upside ... but if he is wrong, he stands to lose his profits from the book deal, exposes himself to criminal liability, and imperils national security. Bolton was wrong," Lamberth said.

Bolton moved to publish the book last summer over the objections of the White House after he said the pre-publication review process had been politicized by officials acting at President Trump's behest. The civil suit against him accused Bolton of violating nondisclosure agreements he had signed upon his appointment as national security adviser, but attorneys for Bolton reasoned that he had no obligation to honor those agreements if Trump officials who intervened in the pre-publication review weren't acting in good faith.

A Lawsuit Against Jan. 6 Rally Speakers Forces DOJ To Consider Who's Legally Immune

A lawsuit against the men who spoke at a rally before the Capitol riot on Jan. 6 is putting the Justice Department in a tricky position. The department is considering whether those federal officials acted within the scope of their jobs that day, which would trigger a form of legal immunity. Government watchdogs said the case has serious implications for who's held accountable for violence that delayed the election certification and contributed to the deaths of five people.

Keilar presses John Bolton: Do you regret not testifying at Trump's impeachment trial?

John Bolton, former national security adviser under Donald Trump, said he did not regret withholding testimony during Trump’s first impeachment trial because it was “doomed to fail” and emboldened the former president.

A federal judge has dismissed a lawsuit against Trump-Russia FBI spy Stefan Halper, while also sanctioning plaintiff Svetlana Lokhova and her attorney for “their continuing to bring frivolous litigation against Halper.”. The final ruling, filed July 9 in Virginia by U.S. District Court Judge Leonie M. Brinkema, came in the...

Counsel for far-right attorney Sidney Powell and other lawyers in a Michigan post-election case alleging fraud said Monday that former President Donald Trump’s claims of voter fraud should shield the attorneys from being sanctioned in the case, arguing the fact the president alleged widespread election fraud made their own false evidence of it more legitimate.

John R. Bolton is out to prove former President Donald Trump’s base of support in the Republican Party is shrinking — putting him at odds with a number of GOP lawmakers who have pledged fealty to the 45th president and, in some cases, parroted his stolen election claims. Mr. Bolton,...

Michael Flynn says maybe he'll 'find somebody in Washington, D.C.,' after being given an AR-15

WASHINGTON — Former national security adviser Michael Flynn, who twice pleaded guilty to lying to the FBI but then received a pardon, suggested this month that he would use an AR-15 rifle he was given as a gift to shoot someone in Washington. In a video posted on Twitter, Flynn...

Sen. Warren: Trump inaugural committee chair indictment is why we need For the People Act

Thomas Barrack, a longtime friend of Donald Trump's who chaired the former president's inauguration committee, was arrested Tuesday on federal charges that he acted as an agent of a foreign government. Prosecutors said Barrack, 74, parlayed his close ties to the Trump White House to advance the interests of the...

Carol Leonnig and Philip Rucker, the authors of "I Alone Can Fix It," tell "Face the Nation" that former President Trump became "emboldened" after his first impeachment trial, and in 2020, that became a crisis that put "all of us at risk and American lives are lost as a result."

CNN host Jake Tapper confronted Pennsylvania Senator Pat Toomey about the Republican Party's resistance to the House committee investigating the deadly January 6 Capitol riot. On State of the Union Sunday, Tapper asked the Republican senator on why there are not many in the GOP who want to treat the matter as a priority.

On Tuesday, the Justice Department and the House of Representatives will file briefs explaining to a federal court whether each believes that Rep. Mo Brooks (R-Ala.) was acting within the scope of his employment when he allegedly incited the violent attack on the Capitol and sought to subvert the peaceful transfer of power on Jan. 6. This sounds absurd, but in effect Brooks is asking the Justice Department to certify that he was acting in the scope of his duties when he tried to overthrow the government. If he succeeds, he would be immune from suit, and the Justice Department would step in on behalf of the government in civil suits arising from the violent insurrection.

Tom Barrack, Donald Trump and the (other) most corrupt White House in history

The criminal charges brought last week against Tom Barrack, a major fundraiser for former President Donald Trump’s 2016 campaign and chairman of his 2017 inaugural committee, were simply the latest in a long string of indictments (and convictions) of high-level Trump associates. (A spokesperson for Barrack, who was released Friday on $250 million bond, said the former fundraiser “has made himself voluntarily available to investigators from the outset. He is not guilty and will be pleading not guilty.”)

WASHINGTON – Wealthy businessman Tom Barrack is facing criminal charges that are typically described as "illegal foreign lobbying," or violating "foreign lobbying" laws. But the federal statute under which Barrack was charged, Section 951 of the U.S. Criminal Code is used by the Justice Department to prosecute spies, not lobbyists. Which means this case is really about national security.

It's gone beyond whitewashing history. Ex-President Donald Trump and his House Republican enablers are now spinning fantastical inversions to hide his crimes against the Constitution on January 6.

McCarthy would rather pander to Trump than probe Jan. 6 crimes

On Wednesday, House Minority Leader Kevin McCarthy, R-Calif., withdrew every Republican he nominated for the special select committee to investigate the Jan. 6 riot at the U.S. Capitol. He said he was yanking his nominees because House Speaker Nancy Pelosi, D-Calif., had gone “further than anyone's gone before” in vetoing two of his picks for the panel, and he declared the entire effort to gather crucial information about that fateful day a politicized “sham.”