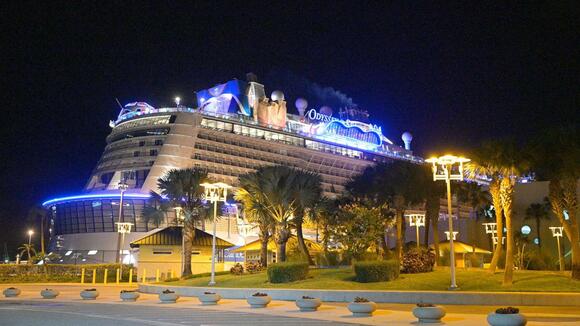 Royal Caribbean has postponed a sailing in July "out of an abundance of caution" after eight crew members tested positive for COVID-19.

The cruise line said that during routine testing eight workers on the Odyssey of the Seas received a positive test result. The workers had been vaccinated against the virus on June 4 but will not be considered fully vaccinated until June 18, Royal Caribbean said.

"The positive cases were identified after the vaccination was given and before they were fully effective," Michael Bayley, Royal Caribbean’s president and CEO, said in a statement.

The ship was set to depart from Florida on July 3, but it will now set sail at the end of the month following the positive cases.

"The eight crew members, six of whom are asymptomatic and two with mild symptoms, were quarantined and are being closely monitored by our medical team," Bayley said. "To protect the remaining crew and prevent any further cases, we will have all crew quarantined for 14 days and continue with our routine testing."

Royal Caribbean did not specify which vaccine the workers received.

The cruise line said guests of the postponed trip will be notified and given "several options to consider."

"This is the right decision for the health and well-being of our crew and guests," Bayley said.

The world’s two largest cruise lines, Royal Caribbean and Carnival Cruise Line, have officially resumed cruises from U.S. ports this 4th of July weekend. Carnival Vista marked the return of Carnival cruises this afternoon when the cruise ship departed from Galveston for a cruise to the Caribbean. Carnival Cruise Line’s...

Royal Caribbean International's Freedom of the Seas sailed from Miami on Friday, marking the brand's first U.S. cruise in more than 15 months with paying guests aboard. According to the company, 93 percent of those onboard are fully vaccinated (crew and guests) for the first cruise of a summer-long series of three-night weekend and four-night week-day getaways to Perfect Day at CocoCay and Nassau, The Bahamas.

Royal Caribbean’s 4,275-passenger Freedom of the Seas has restarted sailings from Miami to the Bahamas with two classes of passengers on board—those who’ve been vaccinated against Covid-19, and those who have not. Jabbed guests, identified with special wristbands, get full run of the ship; those unprotected from the virus won’t even be able to walk into the sushi bar, casino, or spa.

A major cruise liner will allow those in the US who have not taken the coronavirus vaccine on its ships after the governor of Florida threatened to fine companies for asking patrons to prove they have taken the shot. The Miami Herald reported that Royal Caribbean International previously planned to only allow vaccinated passengers onto its ships, but announced in a Friday press release that they were reversing course. The company said it would recommend that its passengers take the vaccine, but said it would not require it. Previously the company stated that it intended to enact vaccine protocols suggested...

What was supposed to be a relaxing post-pandemic cruise actually saw a passenger meltdown after the cruise line said she tested positive for COVID-19. In a video that went viral, the unvaccinated passenger rants as a team in full hazmat gear escorts her off the cruise ship. “I felt like...

A 40-year old passenger was confirmed to be positive for COVID-19 onboard Dream Cruises World Dream this week. Despite the strict measures, the cruise lines in Singapore operate under, the guest was found to be positive during the 3-night voyage from Singapore’s Marina Bay Cruise Terminal. The case comes as...

Royal Caribbean's test cruise returned to Port Canaveral on Thursday morning. The goal of this cruise is to determine if Royal Caribbean can operate safely during the pandemic.

In a move that we thought could happen, Royal Caribbean is now requiring COVID tests before boarding for all passengers sailing on five-night (or longer) cruises from the United States. There is now a notice that outlines the new details on the Royal Caribbean website. It says all guests —...

Royal Caribbean announced it would now require all passengers scheduled to sail from the United States to provide proof of a negative COVID-19 test. According to the cruise line’s official website, Royal Caribbean revealed the changes were made “in an abundance of caution” as coronavirus cases in the U.S. have spiked due to the more dangerous and transmittable Delta variant.

With the Delta variant spreading worldwide, Royal Caribbean has decided to modify its testing policy to make sure all guests remain protected as the cruise line continues to move forward safely on resuming cruises. Royal Caribbean Protocol Change. In keeping guests and crew safe from the spreading delta variant, Royal...

Royal Caribbean Cruises said Friday it will require all guests on U.S. cruises of five days or more to test for Covid. Six guests on its Adventure of the Seas ship tested positive for Covid-19. Four were fully vaccinated against the virus. The company's CEO said the new policy is...

More than a month after Royal Caribbean did a test voyage to simulate how the line would handle passengers if they tested positive for COVID-19, the cruise line this week faced the real thing: Six guests aboard the Adventure of the Seas ship tested positive, the company confirmed Friday. Four...

PORT CANAVERAL, Fla. — Passengers are getting ready to board Royal Caribbean's Allure of the Seas for a test voyage. It's one of four ships in Port Canaveral right now. It's a sight we haven't seen in more than a year due to the coronavirus pandemic, which paused all cruising until just recently.

For the first time in over 15 months, two cruise ships will depart on the same day for cruises to the Caribbean from Port Everglades. One of the cruise ships, Royal Caribbean’s Odyssey of the Seas, will sail her long awaited maiden voyage today. Joining Odyssey is Celebrity Edge, she sailing her sixth cruise since becoming the first cruise ship to resume cruises from U.S. ports in June.

The most important aspect in the safe return of cruising is without a doubt the use of vaccines to protect passengers and crew. But as headlines have shown around the world, the vaccines — while undoubtedly beneficial — are not bulletproof. Case in point: Royal Caribbean’s Adventure of the Seas...

Royal Caribbean Updates COVID-19 Testing Policy for All Guests, Regardless of Vaccination Status

Royal Caribbean will now require all guests to get tested for COVID-19 for certain cruises, regardless of their vaccination status. Going forward, the cruise line will make pre-departure testing mandatory for all guests 2 and older, both vaccinated and unvaccinated, the company's website reads. Passengers will have to take either a PCR or antigen test at an accredited test provider at least three days before their scheduled departure for all cruises five nights or longer.

Two more Royal Caribbean ships will begin their test cruises today, including the world's largest cruise ship. Independence of the Seas and Symphony of the Seas will both begin their simulated voyages so that they can get permission from the U.S. Centers for Disease Control and Prevention (CDC) to sail with paying passengers.