House to vote Wednesday on making Juneteenth a federal holiday 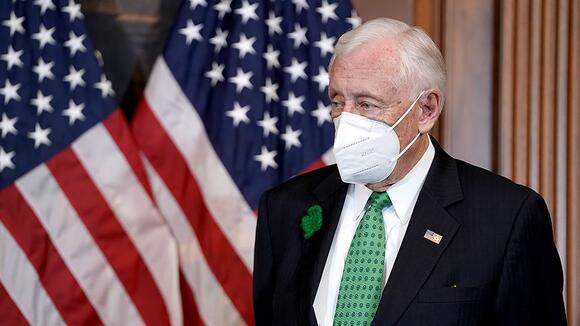 House Majority Leader Steny Hoyer (D-Md.) has announced that the House will vote on making Juneteenth a federal holiday on Wednesday.

The bill passed by unanimous consent in the Senate on Tuesday night, and it seems likely to pass the House, which would send the legislation creating the federal holiday to President Biden 's desk.

It is unclear whether the House will take the same route or hold an official roll call vote.

Celebrated on June 19, Juneteenth commemorates the last remaining enslaved people in Galveston, Texas, being emancipated by Union soldiers. It is being recognized by a number of states on Friday, June 18, this year.

Rep. Thomas Massie, a Kentucky Republican, said Thursday that House Speaker Nancy Pelosi might as well come to his office and arrest his entire staff for not wearing masks.

Washington CNN — When the Senate voted Wednesday to open debate on a roughly $1 trillion infrastructure package, more than a dozen Republicans sided with Democrats to advance the legislation. The proposal, which came after weeks of negotiations between a bipartisan group of lawmakers and the White House, includes $73...

WASHINGTON—I’m back, ye pack o’bastids. The free ride is over. I haven’t been here since the first time they impeached the last guy, and if that isn’t the damndest sentence I’ve ever written about American politics, it’ll do until another one comes along. We are in the middle of the end-of-session bloodbath as Congress tries to get an infrastructure deal passed that everybody wants, and that everybody wants to kill so that they can blame everybody else for having done so next year, when it’s time to run for office again. This is the way things work when the majority in both houses is a slim one, and the minority party is perpetually seconds away from smearing mud on its face and sacrificing people to Baal.

As bipartisanship reigns in U.S. Senate, Republicans rage in House

WASHINGTON (Reuters) – A day after the U.S. Senate passed a major bipartisan milestone on infrastructure, Republicans in the House of Representatives lapsed into bitter partisanship and infighting, attacking both Democrats and Republican opponents of former President Donald Trump. House Republican leader Kevin McCarthy and other Republicans poured scorn on...

The House voted 416 to 11 on Thursday to approve a roughly $2 billion Capitol Hill security spending bill in response to the deadly January 6 insurrection, clearing the measure for President Joe Biden's signature.

WASHINGTON, D.C. - There is mixed reaction on Capitol Hill about President Biden considering new vaccine requirements for federal employees, and about a new mask mandate in the U.S. House chambers. For some lawmakers, a COVID vaccine mandate for the nearly 2.2 million federal employees appeared inevitable. “I think that...

Biden backs effort to include immigration in budget package

President Biden on Thursday unequivocally backed Democratic efforts to include immigration in the budget as a way to navigate narrow margins in the Senate. "I think we should include in the reconciliation bill the immigration proposal," Biden told reporters as he left the White House to accompany first lady Jill Biden to Walter Reed National Military Medical Center.

Rep. Alexandria Ocasio-Cortez is not happy with fellow Democrat Sen. Kyrsten Sinema. On Tuesday, Sinema announced her opposition to her party’s $3.5 trillion infrastructure proposal, citing a concern about the cost. She issued a statement that read:. After reviewing the Senate Budget Committee’s outline, I have told Senate leadership and...

Rep. Sheila Jackson Lee (D-Texas) on Thursday became the third member of the Congressional Black Caucus in as many weeks to be arrested for civil disobedience to bring attention to Congress’ current partisan deadlock on voting rights. “Some people want to juxtapose against us that we are angry against the...

Top Democrat: 'A lot of spin' coming from White House on infrastructure

The leading House Democrat on infrastructure policy is leery of the message coming out of the White House as it races to rally support behind a major bipartisan spending deal. Rep. Peter DeFazio (D-Ore.), chairman of the House Transportation and Infrastructure Committee, raised serious objections Thursday to the nascent agreement between President Biden and a group of bipartisan senators, saying it does little to address climate change and that House leaders should alter the bill if it gets passed by the upper chamber.

A telling 'no' on House Republicans' anti-mask vote

(CNN) — On Wednesday, Texas Republican Rep. Chip Roy tried to adjourn the House to protest new guidelines that would require members of Congress to wear masks on the floor. "This institution is a sham, and we should adjourn and shut this place down," Roy said theatrically as Georgia Rep. Marjorie Taylor Greene gave him a standing ovation.

Nearly 40 maskless House Republican lawmakers walked across the Capitol and onto the Senate floor in protest of the Capitol physician’s decision to reinstate a mask mandate in the lower chamber but not in the upper chamber. Republicans complained that the policy, backed by Speaker Nancy Pelosi (D-Calif.) and other...

Republican congresswoman Marjorie Taylor Greene and two other lawmakers are filing a lawsuit over masking rules on the House floor. The suit was filed Tuesday in Washington's US District Court. It targets House Speaker Nancy Pelosi and the House Sergeant at Arms. Greene said, "We are filing this federal lawsuit...

Hours after bipartisan Senate negotiators reached a deal on an infrastructure package, the chamber voted to advance it, setting in motion a final vote on the bill in the coming days. The procedural motion was approved 67-32, with 17 Republicans joining all Democrats to begin legislative action. The top Senate...

House Republicans, including House Minority Leader Kevin McCarthy (R-Calif.) and Rep. Jim Banks (R-Ind.), have frequently suggested that House Speaker Nancy Pelosi (D-Calif.) and her fellow Democrats are dodging the question of why the Capitol Police force was unprepared for the Jan. 6 riot as they try to get to the bottom of the events of that day.

Sinema says she does not support $3.5 trillion reconciliation package Democrats plan to pass along party lines

Democratic Sen. Kyrsten Sinema of Arizona announced Wednesday that she does not support a $3.5 trillion dollar budget bill Democrats plan to pass along party lines, saying she doesn't agree with its price tag, on the same day lawmakers hashed out an agreement on a $1 trillion bipartisan infrastructure package.

Masks are once again emerging as a flash point on Capitol Hill after Congress’s top doctor issued new guidance and cases ramp back up due to the delta variant of COVID-19. More than half a dozen Republican lawmakers refused to comply with a reinstated requirement Wednesday that everyone wear masks on the House side of the Capitol, which followed new Centers for Disease Control and Prevention (CDC) guidance the day before urging everyone in high-risk areas to wear masks.