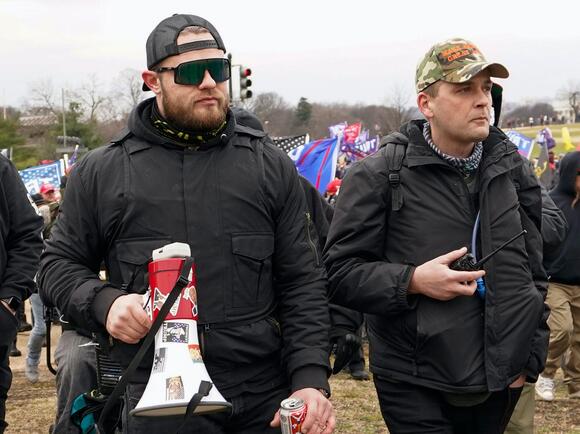 Proud Boys members squabbled in private conversations after the Capitol riot, according to newly-released audio transcripts in a group leader's court case.

Ethan Nordean, a 30-year-old described as the "Sergeant of Arms" of the Proud Boys' Seattle chapter, was arrested in February and charged with obstructing or impeding an official proceeding, aiding and abetting, and knowingly entering a restricted building, according to the Associated Press .

The most serious charge against Nordean, who also goes by the alias "Rufio Panman," carries a sentence of up to 20 years in prison.

Court documents released on Tuesday detailed audio files investigators had recovered from Nordean's cell phone, that were exchanged on Telegram, an encrypted-messaging service that has become popular with far-right groups.

In the conversation, individuals who appeared to be fellow Proud Boys members expressed worry about the ongoing investigation and arrests of people involved in the Capitol riot, while others chastised the members who took part in the riot.

There was also a discussion speculating about how solid of a case federal prosecutors were building. One individual commented that "feds don't charge until they have a lot of evidence," and if they "have enough evidence they are not going to offer much of a plea" deal.

"They're going to throw the f---ing book at us," one individual said in one of the audio files.

There appeared to be a lot of intergroup conflict in the audio transcripts as well, with some individuals unhappy that members even went to Washington, DC, in the first place.

According to the transcript, one individual said that he was confused about what happened in Washington because he thought they had voted not to go.

Another audio file included a comment about Nordean getting "lost in the sauce" and that the Proud Boys' top leader, Enrique Tarrio, should step down. Another individual said that members under indictment should leave leadership positions.

The Proud Boys appeared to splinter after the Capitol riot , particularly after Tarrio was found to be an FBI informant for many years.

The Daily Beast reported in February that regional branches of the Proud Boys had been distancing themselves from central leadership since that revelation.

Tarrio was arrested before the Capitol riot for an unrelated charge of burning a Black Lives Matter flag at a Black church. Before the Capitol riot, Nordean was known for fighting left-wing demonstrators in Portland, Oregon, according to the Southern Poverty Law Center .

Nordean himself chimed into the conversation at points to defend his actions. He said he led others so they didn't go astray, according to the transcript.

Nordean also said, according to the transcript, that he was no longer a Trump supporter and expressed regret for going to his rallies. He said he thought he was fighting for some secret plan that didn't come to fruition, and didn't disagree that things went bad.

Nordean is currently in jail awaiting trial. He was initially released on pretrial confinement, but US District Judge Timothy Kelly reversed that decision in April, saying he was dangerous and no conditions for his release would be adequate, according to the AP .

The Justice Department Is Struggling To Bring Capitol Riot Cases To Trial: Here's Why

Early one morning in January, Suzanne Ianni peered through her window to discover two black SUVs and a police cruiser parked in front of her house. All she could think was: "Aw, they're here." While Ianni had been expecting federal agents for days, she wasn't fully prepared for their arrival...

Capitol Officer Michael Fanone describes the danger he encountered at the hands of the Pro-Trump mob that breached the US Capitol on January 6 during the House select committee hearing.

It had only been hinted at in previous public examinations of the Jan. 6 Capitol insurrection: Scores of rioters attacked police officers not just with makeshift weapons, stun guns and fists, but with racist slurs and accusations of treason. Four officers, two from the U.S. Capitol Police and two from...

The select committee investigating the Jan. 6 attack on the U.S. Capitol is holding its first meeting Tuesday. Scheduled to testify are four police officers, two from the U.S. Capitol Police and two from the Washington, D.C., Metropolitan Police Department. The four officers — Harry Dunn and Aquilino Gonell of...

The House Select Committee investigating the January 6 Capitol riot is holding its first hearing Tuesday, with testimony from law enforcement officers who defended the building that day. Officers were severely outnumbered, and CBS News has reported that, in total, more than 150 officers were injured during the attack. The...

WASHINGTON, D.C. (KYMA, KECY/CNN) - The House of Representatives select committee assigned to investigate the Wednesday, January 6, riot holds its first public hearing Tuesday. Four police officers who were on the front lines during the insurrection are scheduled to testify. This is what we know about them:. MPD Officer...

WASHINGTON (AP) — During emotional, tense and sometimes angry testimony, four police officers who defended the Capitol on Jan. 6 vividly recalled the violence they endured while fighting against a mob of Donald Trump's supporters. “I was grabbed, beaten, Tased, all while being called a traitor to my country,” said...

ProPublica and a coalition of 15 other news organizations including The Washington Post, The Associated Press, CBS and NBC have been suing for access to the video exhibits shown in the criminal cases against the accused Jan. 6 rioters. The coalition has been arguing for access before a series of federal judges in the District of Columbia, and the Department of Justice has been sending us new videos as we win our applications. Below we’ve organized these videos by case, and they are shown exactly as given to us by the DOJ. We’ll add more videos as we get them. Related: What Parler Saw During the Attack on the Capitol.

U.S. Capitol Police Chief J. Thomas Manger responded Friday to Fox News host Tucker Carlson having recently targeted Officer Harry Dunn, a member of his force set to testify in the House soon about Jan. 6. “He’s entitled to his opinion, but I will tell you this: My cops, every...

WASHINGTON — J. Thomas Manger, a former police chief in Maryland and Virginia, is starting Friday as the new chief of the U.S. Capitol Police, congressional officials have announced. Manger takes charge of the department in the aftermath of the violent Jan. 6 riot in which supporters of former President...

CNN — A Capitol rioter who captured Ashli Babbitt’s death on video became the 20th person to plead guilty for his involvement in the deadly January 6 insurrection. Andrew Bennett of Maryland pleaded guilty Thursday in DC District Court to illegally demonstrating inside the US Capitol. He got the same deal as other nonviolent rioters pleading to a single misdemeanor – including paying $500 in restitution for damage to the Capitol building and giving investigators access to his social media data.

(CNN) — A federal judge forced a US Capitol rioter to unlock his laptop Wednesday after prosecutors argued that it likely contained footage of the January 6 insurrection from his helmet-worn camera. The judge granted the Justice Department's request to place Capitol riot defendant Guy Reffitt in front of his...

DEA agent arrested on charges related to the Capitol riot

WASHINGTON — An agent with DEA posed for photographs in which he flashed his DEA badge and firearm outside the U.S. Capitol during the Jan. 6 riot, according to a court filing Tuesday following the agent’s arrest. Moreover, Mark Sami Ibrahim was seen in a video posted on the internet...

ORLANDO, Fla. - The Federal Bureau of Investigation has a warning for anyone who participated in the Jan. 6 riot at the U.S. Capitol Building. "This is six months later and we’re still arresting people and we’re not done," FBI Special Agent In Charge Michael McPherson said. "So if you’re still sitting at home and you did this and you think ‘oooh I got away with it’, don’t believe that. We’ll identify you we’ll arrest you and we’ll hold you accountable."

A U.S. Drug Enforcement Administration agent has been arrested for allegedly participating in the Jan. 6 riot at the U.S. Capitol by supporters of then-President Donald Trump. The agent, Mark Sami Ibrahim, allegedly flashed his badge and a DEA-issued handgun during the riot. Authorities said he entered the restricted area...

A US Capitol insurrection defendant who chased a Black police officer up a staircase and away from government officials in the Senate, is being released from jail to home incarceration after a judge found there wasn't enough evidence to show he was still a serious threat to public safety.

WASHINGTON — Five members of a family from the Texas Panhandle were arrested Tuesday, becoming the largest family group charged in connection with the Jan. 6 riot at the U.S. Capitol. Thomas and Dawn Munn, of Borger, Texas, and three of their children, Kristi, Joshua and Kayli, were charged with...

KERNERSVILLE, N.C. (WGHP) — A Kernersville man arrested for his involvement in the January 6 riot at the U.S. Capitol building will appear in court. Charles Donohoe will have a status conference Thursday at 2 p.m. Donohoe, a Marine veteran, is charged with helping plan the attack on the Capitol.