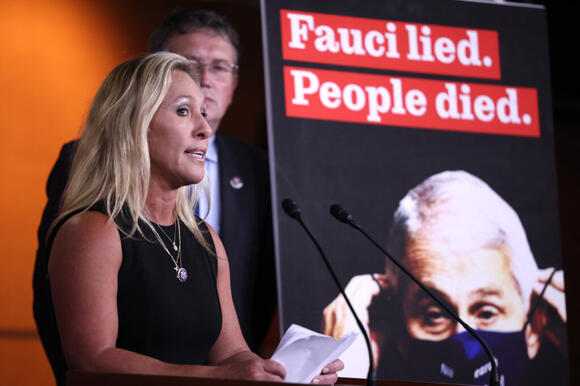 WASHINGTON — U.S. Rep. Marjorie Taylor Greene of Georgia on Tuesday led a group of House Republicans calling for the firing of Dr. Anthony Fauci, formalizing their intense criticism of his public statements and actions throughout the coronavirus pandemic into legislation.

Those GOP lawmakers can’t actually oust Fauci from his post as director of the National Institute of Allergy and Infectious Diseases and a top Biden administration adviser. Instead, the bill led by Greene would eliminate his federal salary, which was more than $417,000 in 2019 .

Greene was joined at the news conference by Republican cosponsors of her legislation, including Reps. Andy Biggs and Paul Gosar, of Arizona; Buddy Carter, of Georgia; and Bob Good, of Virginia.

Their bill has no likelihood of passage in the House, which is controlled by Democrats, but the event gave Greene and other conservatives another chance to attack Fauci, who became the face of the federal government’s response to COVID-19.

They accused him of misleading the public by shifting his guidance on mask-wearing and details of how the virus is transmitted — even though he and other leading scientists have defended the updates to those recommendations as the expected result of learning more about a brand-new health threat.

“As a scientist, as a health official, when those data change, when you get more information, it’s essential that you change your position because you have to be guided by the science and the current data,” Fauci said in a recent interview with MSNBC’s Chuck Todd.

Fauci has been a political lightning rod throughout the pandemic, with liberals praising the charismatic public health official and Republicans demonizing him as the Trump administration struggled to contain the virus, at times taking actions counter to Fauci’s counsel.

Those attacks against Fauci have renewed amid the release of thousands of pages of Fauci’s work emails throughout the pandemic, which were acquired by BuzzFeed and The Washington Post via Freedom of Information Act requests.

“He’s an actor, and deserves an Academy Award for best dramatic acting in a pandemic,” Gosar said of Fauci.

Gosar accused Fauci of knowing that the virus causing COVID-19 originated in a lab in Wuhan, China. But Fauci’s emails have not shown that to be the case , and broader evidence remains inconclusive as to the virus’ precise origins.

Others focused on the lockdowns that affected U.S. schools and businesses last year, with Good blaming Fauci for “ridiculous policies that locked down our churches and small businesses.”

The White House has made clear that it is standing with Fauci, with President Joe Biden saying recently that he is “very confident” in Fauci’s ability to do his job.

The GOP news conference came a day after Greene sought to tamp down a wave of criticism she has faced for repeatedly using Holocaust comparisons to criticize face-mask mandates that have been enacted amid the coronavirus pandemic.

Those statements drew a rebuke from Minority Leader Kevin McCarthy (R-Calif.), and the prospect of a censure by the U.S. House. On Monday, Greene visited the Holocaust Memorial Museum in D.C., and afterward acknowledged to reporters that some of her past comments were “offensive” and “hurtful.”

“There is no comparison to the Holocaust,” Greene said Monday evening.

Greene was stripped earlier this year of her committee assignments for her past social media postings in which she supported violence against Democratic leaders and lawmakers.

The post Marjorie Taylor Greene in new attack on Fauci demands his salary be stripped appeared first on Florida Phoenix .

A top candidate for the U.S. Supreme Court has roots in Miami

Quality Journalism for Critical Times WASHINGTON — With the retirement of U.S. Supreme Court Justice Stephen Breyer by this summer, President Joe Biden has said he will fulfill a campaign promise of appointing a Black woman to an open seat on the highest court in the land. A top contender, who was even vetted by the Obama administration in 2016 […] The post A top candidate for the U.S. Supreme Court has roots in Miami appeared first on Florida Phoenix.
MIAMI, FL・23 HOURS AGO
Florida Phoenix

Quality Journalism for Critical Times The furious Democrats who revile Kyrsten Sinema don’t know her very well. She may not have single-handedly derailed President Joe Biden’s presidency by ensuring that none of his ambitious legislative agenda ever reaches his desk, but Arizona’s senior senator certainly has become the face of the Democrats’ circular firing squad. And her highly choreographed speech […] The post Kyrsten Sinema is gambling that her filibuster vote will help her win again in 2024 appeared first on Florida Phoenix.
CONGRESS & COURTS・8 DAYS AGO
People

Marjorie Taylor Greene Gets Earful from Constituents During TV Appearance: 'We All Have Our Opinions'

Polarizing Rep. Marjorie Taylor Greene faced criticism from some of her own constituents during a Wednesday radio and cable TV appearance, when a caller to the program deemed her "an embarrassment to the state of Georgia." The moment came while the Republican lawmaker was participating in a call-in episode of...
GEORGIA STATE・1 DAY AGO

Callers Tell Rep. Marjorie Taylor Greene Exactly How They Feel About Her

Rep. Marjorie Taylor Greene (R-Ga.) sat for a call-in show on a local cable access station this week and it got awkward in a hurry. One caller described her as an “embarrassment to the state of Georgia.”. Another ripped her and others who don’t accept Donald Trump’s 2020 election...
GEORGIA STATE・1 DAY AGO
cobbcountycourier.com

It’s been a while since I’ve given one of our Tin Foil Hattery reports, mainly because so much actual news out here in the real world has been going on. But this morning I began scrolling through Majorie Taylor Greene’s Telegram account to see what gems of wisdom she’d distributed.
COBB COUNTY, GA・7 HOURS AGO
HuffingtonPost

Rep. Marjorie Taylor Greene won’t return to Congress for a second term without confronting some opposition from Republicans in her Georgia district, where several challengers are trying to knock her out in the GOP primary. Greene is still highly favored to win a second term, but her opponents underscore...
GEORGIA STATE・3 DAYS AGO

It’s funny to think about the J.D. Vance of 2016. At the time, hot on the heels of his staggeringly successful memoir Hillbilly Elegy, he was a liberal darling, the media’s chosen intermediary between their ivory towers and the unwashed masses that mysteriously swept Donald Trump into power that November. Vance was a man of both worlds: Yale-educated, Kentucky-raised, and building a powerful mythos around himself as the personification of a united America, while the country around him grew ever more divided.  It seems inevitable that Vance would see this myth as one that people would vote for, but somewhere along...
OHIO STATE・3 DAYS AGO
NBC News

WASHINGTON — Rep. Marjorie Taylor Greene, R-Ga., is backing JD Vance in Ohio's crowded Republican Senate primary, his campaign announced on Tuesday. "JD Vance is the conservative warrior that the entire America First movement needs fighting for us in the U.S. Senate, and that's why I'm proud to endorse him," said Greene, in a statement released by the Vance campaign.
OHIO STATE・3 DAYS AGO
Fox News

Rep. Marjorie Taylor Greene Thursday compared vaccine mandates and cards to a Nazi "health pass" in a Telegram post mirroring holocaust-related COVID-19 rhetoric that landed the congresswoman in hot water last year. "This past year the Democrat's obsession with vaccine cards proved they are like the Nazi's who forced people...
CONGRESS & COURTS・7 DAYS AGO
Fox News

President urged to make good on promise to pick Black woman to fill vacancy, with Stephen Breyer to retire as justice – follow the latest
PRESIDENTIAL ELECTION・1 DAY AGO
Newsweek

Holly McCormack said she wasn't allowed to ask Greene a question at her event in Catoosa County, Georgia.
RINGGOLD, GA・2 DAYS AGO
Newsweek

McConnell said he would give Biden's nominee "a fair look" on the same day he warned the president against choosing a judge from "the radical left."
CONGRESS & COURTS・18 HOURS AGO
Newsweek

The Washington congresswoman told Newsweek about how her new bill crosses over with parts of the $1.75 trillion legislation.
CONGRESS & COURTS・2 DAYS AGO

U.S. Supreme Court Justice Sonia Sotomayor has been in the news a lot lately. First, the liberal justice revealed a staggering amount of ignorance about COVID-19 in early January as the court heard oral arguments over President Joe Biden’s vaccine mandate for large employers. Sotomayor was so off –...
CONGRESS & COURTS・4 DAYS AGO
HuffingtonPost

Quality Journalism for Critical Times WASHINGTON — Senators from both political parties expressed their frustration with the Biden administration coronavirus response team during a Tuesday hearing that keyed in on the Centers for Disease Control and Prevention’s guidance on vaccines, as well as the shortage of COVID-19 tests available for Americans. The hearing also was highlighted by a tense exchange between […] The post Complaints about White House handling of COVID-19 aired at U.S. Senate hearing appeared first on Florida Phoenix.
POTUS・16 DAYS AGO
Florida Phoenix

Quality Journalism for Critical Times WASHINGTON — Senate Majority Leader Chuck Schumer said that the Senate will act as soon as Wednesday to attempt to again pass voting rights legislation. “Failure is not an option for the democracy of America,” the New York Democrat said at a Tuesday press conference with other Senate Democrats. “We’re running out of time.” Schumer […] The post Schumer insists ‘failure is not an option’ as voting rights fight intensifies appeared first on Florida Phoenix.
CONGRESS & COURTS・16 DAYS AGO