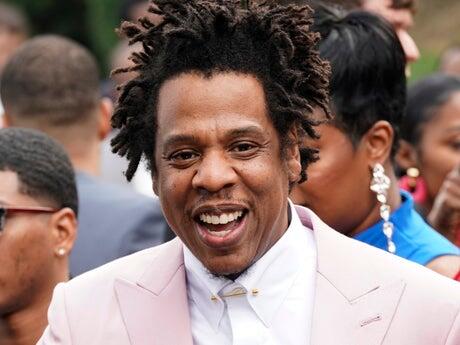 Jay-Z has filed a lawsuit against photographer Jonathan Mannion, accusing him of exploiting and profiting off the rapper ’s likeness by selling his photos without permission.

According to documents obtained by Rolling Stone , the 51-year-old rapper – real name is Shawn Corey Carter – hired the hip-hop photographer in 1996 to shoot the cover for “Reasonable Doubt” during which he clicked “hundreds of photographs” of the rapper.

The legal action states that Mannion was compensated for his work and that Carter never gave him “permission to resell any of the images”.

“Nor did Jay-Z authorise Mannion to use his name, likeness, identity, or persona for any purpose,” the lawsuit states.

Therefore, as Mannion was never given permission to sell Carter’s photos, the suit claims that “Mannion has no legal right to do so”.

Additionally, when the “Empire State of Mind” singer asked the photographer to stop using his images, he refused and in return “demanded that Jay-Z pay him tens of millions of dollars to put an end to Mannion’s use of Jay-Z’s likeness”.

According to TMZ , Carter said that Mannion is making an “arrogant assumption that because he took those photographs, he can do with them as he pleases”.

Reports also state that the photographer “prominently displays a photograph of Jay-Z” on his website's homepage and sells “Fame Wall” t-shirts, which “displays Jay-Z’s name… above other well-known artists that Mannion has photographed”.

The suit claims violation of a California Civil Code for allegedly “misappropriating and using for commercial purposes Jay-Z’s name, likeness, identity, and persona without permission” and “violating California common law regarding rights of publicity”.

The “Picasso Baby” singer is seeking a preliminary and permanent injunction that would expect Mannion to quit utilising his likeness in addition to unspecified damages.

On 15 June, a representative of the 50-year-old photographer told TMZ: “Mr Mannion has created iconic images of Mr Carter over the years, and is proud that these images have helped to define the artist that Jay-Z is today.

“Mr Mannion has the utmost respect for Mr Carter and his body of work and expects that Mr Carter would similarly respect the rights of artists and creators who have helped him achieve the heights to which he has ascended.”

The representative likewise referenced that “the First Amendment protects Mr Mannion’s right to sell fine art prints of his copyrighted works” and that they will review the complaint and respond in “due course”.

Jay-Z, Diddy, Saweetie, The Game & More Show Out For 4th Of July

Backyard barbecues, fireworks, and having a good time is what this summer holiday is all about. After missing out on large gatherings with last year's fourth of July in the thick of the pandemic, this holiday was bound to be one to remember. Check out our round-up to see what...

He’s got 99 problems, and 100 job openings. Jay-Z is reopening his 40/40 Club in Madison Square in August, and is looking to hire for 100 positions, we hear. The hotspot is going to host an open call for bartenders and servers on Saturday and Sunday from 1 to 5 p.m.

Kanye West and Jay-Z put their near-decade beef aside as they team up on Donda's final track Guess Who’s Going to Jail Tonight?... which HOV recorded just HOURS EARLIER

Fans who tuned in for the live stream of Kanye West's new album Donda on Thursday were given quite the surprise, with Jay-Z putting in an appearance. West, 44, and Jay-Z, 51 (real name Shawn Carter) haven't seen eye to eye for years, with their last collaboration nearly a decade ago, 2011's Watch the Throne.

Keeping track of what has gone on between Damon Dash and Jay-Z – onetime friends and cofounders of Roc-A-Fella Records –  in the last three weeks has become something of a bloodlust-y spectator sport with unexpected twists at every turn. One thing, for sure, though: When Dash “lost” in his recent attempt to sell his one-third share of the label via an NFT of Jay-Z’s debut album, 1996’s “Reasonable Doubt,” there was no way that defeat would signal the end of the story. Not for Dash. “Stay tuned,” Dash tells Variety, saying that an NFT auction of his much-disputed assets could...

It’s safe to say that there’s “reasonable doubt” that these two former partners will be doing any business any time soon or ever again!. According to The Hollywood Reporter, two-thirds of the trio who started and operated Roc-A-Fella Records, Shawn “Jay-Z” Carter, and Damon “Dame” Dash, are not seeing eye-to-eye as Dame Dash is accusing his former partner of wrongfully taking streaming rights to the first Roc-A-Fella album released by Jay-Z, “Reasonable Doubt” for himself.

The stars came out this weekend for Michael Rubin's 4th of July party in the Hamptons. The all-white party included guests like Quavo and Meek Mill, but also, Jay-Z. The Brooklyn rapper/mogul and his wife Beyoncé pulled up in style to the function but one thing that everyone is talking about is the timepiece on Hov's wrist. The rapper revealed his multi-million dollar Richard Mille RM 56-01 Tourbillon with green sapphire stones. This is the first time Jay's rocked the timepiece publicly.

Will Smith and Jay-Z are helping to make homeownership more accessible. According to Forbes, Smith’s Dreamers VC and Arrive, the investment arm of Jay’s Roc Nation, are among the companies that participated in a Series A capital raise for Landis Technologies—a startup that aims to guide renters on their path to owning a home. The $165 million funding round was led by Signia Venture Partners, and reportedly included investments from founders of Plaid, Cash App, Ethos, Instacart, Front, Flatiron Health, and Tango.

Scarlett Johansson is suing Disney over Black Widow‘s release. Find out why! – Just Jared. Here all of the shocking moments from Love Is Blind: After the Alter – Lainey Gossip. This TikTok star is fighting for their life after a movie theater shooting – Just Jared. Halle Bailey is...

Beyoncé, Jay-Z, and Hermès Fight Back Against Industrialized Luxury With Custom Rolls-Royce Duo

The world’s coolest couples just enlisted the craftiest carmaker and the results are nothing short of trendsetting. Marking the beginning of its ground-up Coachbuild program, the Rolls-Royce Boat Tail built for Beyoncé and Jay-Z—along with a custom Koa wood model for French fashion house Hermès—is redefining luxury product design. The...

You heard it right. Diddy wants you to know he didn't wake up one day and to his surprise he was a rapper, singer, record producer, record executive, entrepreneur and mogul. He started how most do, at the bottom. He was an intern at New York's Uptown Records. He worked his way up to talent director, and before long he was helping develop Jodeci and Mary J. Blige. But before he was Puff Daddy, Puffy, P. Diddy, or Diddy, he was a young man named Sean Combs, living rough on the outskirts of Harlem. He literally had his wake up call to do something about it.

The former 'Beverly Hills, 90210' star divulges that Stella has developed several 'health issues' as the effects of bullying, including 'headaches, stomachaches [and] panic attacks.'. AceShowbiz - Tori Spelling is celebrating one of her kids' achievements. The "BH90210" alum recently showered her daughter Stella with love and compliments on social...

Longtime couple Kevin Bacon and Kyra Sedgwick stunned fans with some unexpected news they couldn't wait to share. The Hollywood stars were delighted to announce they will once again be working together on a new project and fans could barely contain themselves. Kevin will be following his wife's orders as...

We previously reported that rapper Indian Red Boy was shot and killed on Instagram live. Born nèe Zerail Dijon Rivera, KCAL 9 News reports that the rapper was shot multiple times while sitting in his car on the evening of July 8 in Hawthorne. He allegedly dissed Nipsey Hussle, and authorities believe this is why he was targeted. Red Boy is allegedly affiliated with the Bloods gang, and he’s also accused of defacing a Nipsey mural.

George Clooney and wife Amal have denied talk that they are expecting a baby, amid reports that they were expecting twins again. The 60-year-old Hollywood actor was thought to be expecting another child with his lawyer wife, 43, four years after the birth of their twins, Ella and Alexander. The...

Alex Rodriguez is enjoying his time as a single man. The retired MLB star has been celebrating his 46th birthday for the past week while vacationing overseas and documenting his trip on social media with family and friends, which included sports broadcaster Melanie Collins. Despite sparking romance rumors, a source...

Lil Nas X Claps Back at Boosie Badazz's Homophobic Slurs & Violent Threats: 'This Had to Be Said'

Following a homophobic rant from Boosie Badazz, Lil Nas X is clapping back with some choice words of his own — and a little bit of trolling. On Thursday (July 29), Lil Nas took to his Twitter to address a rant in which Badazz used homophobic slurs about the 22-year-old and threatened to "beat his ass." Retweeting a screenshot of comments from former Lakers star Nick Young calling Badazz's comments "facts" and "freedom of speech," Lil Nas quickly shot him down. "a n---a saying he will 'beat my f----t ass' is not what we what we meant by freedom of speech," he wrote.