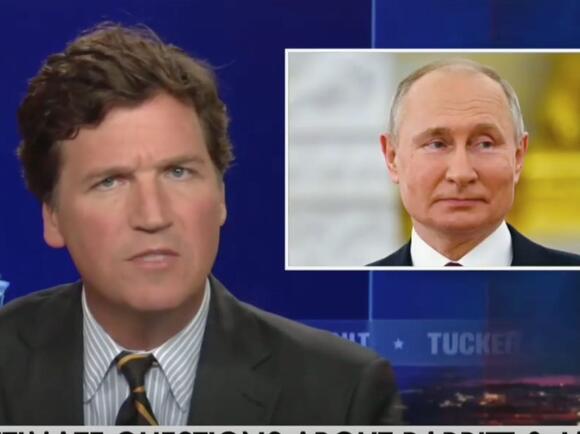 The Fox News host Tucker Carlson says Russian President Vladimir Putin raised "fair questions" about the death of a woman killed by a police officer during the Capitol riot.

In an interview with NBC News , broadcast Monday, Putin was asked whether he had ordered the assassination of Alexei Navalny, the Russian opposition leader who survived a nerve-agent poisoning last year. Navalny has accused Putin of directly ordering the attempt on his life.

Putin responded by bringing up Ashli Babbitt, a Trump supporter whom a police officer fatally shot as she tried to pass over a barricade leading to the Speaker's Lobby.

"Did you order the assassination of the woman who walked into the Congress and was shot and killed by a policeman?" the Russian leader said.

"Do you know that 450 individuals were arrested after entering the Congress? And they didn't go there to steal a laptop. They came with political demands: 450 people."

Carlson played that clip on his Tuesday show and said: "Now, under normal circumstances, we would never play tape of a foreign adversary criticizing our government. But honestly those are fair questions."

"Who did shoot Ashli Babbitt and why don't we know?" Carlson continued. "Are anonymous federal agents now allowed to kill unarmed women who protest the regime? That's OK now? No, it's not OK."

The 521 people charged so far in connection to the attack on the Capitol have been accused of offenses including assaulting police officers and unlawful entry to the Capitol.

Rep. Liz Cheney (R-Wyo.) took a shot at former President Trump ’s role in stoking violence on Jan. 6 during a select panel's first hearing, asking officers giving testimony to weigh in on his comments calling the rioters part of a “loving” crowd. “When you think about that and share...

Not a good day for Rand Paul, or for Tucker Carlson. These two dangerous public figures– who dispute the vaccines and are potentially killing people in their wake– got taken to tasik publicly this weekend. Rand Paul got it on a call in show. Carlson got it in a Montana...

The National Security Agency has quietly admitted that the identity of Fox News prime-time host Tucker Carlson was “unmasked” and leaked as he alleged earlier this month, according to a report. “For the NSA to unmask Tucker Carlson or any journalist attempting to secure a newsworthy interview is entirely unacceptable...

The evidence-free claim that Capitol Police Officer Brian Sicknick died from injuries suffered in the Jan. 6 riot reemerged Tuesday during the first day of hearings in the Democratic-led House select committee's inquiry of the event.

While Tucker Carlson was out in Montana getting heckled as the “worst human being known to man,” his biggest “scoop” of 2021 was circling the drain. The National Security Agency, as it turns out, was not conducting a scheme to spill Carlson’s communications in a plot to have him booted off the air.

Fox News on Friday responded to a news report saying that the National Security Agency (NSA) had uncovered host Tucker Carlson ’s name in third-party communications through “unmasking,” calling the reported move “entirely unacceptable.”. The NSA had completed a review of Carlson’s accusations that the agency had spied on him...

Fox News’ Tucker Carlson was not intentionally spied on by the National Security Agency, according to two sources cited by cybersecurity publication The Record. Carlson was reportedly trying to secure an interview with Russian President Vladimir Putin through intermediaries at the time—and he later made the wild accusation that the NSA was spying on him in an attempt to bring down his TV show. But his name was unintentionally found through collections of foreign communications, sources told The Record. U.S. intel officials saw an American citizen mentioned in talks between foreign officials, later “unmasking” the name to gain a better understanding of the conversation. The NSA does not know the name of those they unmask before they do, nor do they reveal the names in any finalized reports in order to protect their privacy.

Tucker Carlson's name in communications intercepted by the National Security Agency was revealed through the process of "unmasking," according to a new report.

A Capitol police officer who Fox News host Tucker Carlson brushed off as an “angry, left-wing political activist” has fired back at the host on social media. The lawyers representing Harry Dunn, a Black police officer who claims he was called the N-word while fighting to defend lawmakers during the Capitol riot, issued a statement responding to Mr Carlson's attempt to downplay his story. Mr Carlson's attacks on the officer appear to be an attempt undermine his credibility ahead of a House hearing on 27 July investigating the Capitol riot. Mr Dunn is expected to testify at that hearing. “Dunn...

Lawyers representing Harry Dunn issued a blistering riposte after Tucker Carlson attacked the Capitol police officer over his alleged left-wing political leanings. Acting through his attorneys, officer Dunn hit out at Fox News host Carlson, who had questioned his eligibility to speak in an unbiased way at the January 6 committee.

This article marks the debut of a new column excavating the origins of public figures’ factually dubious comments. We explain what their claims are referring to, the evidence (or lack thereof) behind them and where they sprang from in the first place. Who said what …. Speaking on Fox News...

Last week a group of Texas state legislators decided to cast down their nets and follow their consciences. They left their native land on a kind of pilgrimage to find democracy. By leaving, ironically, they ended democracy in their own state. In their absence, Texas could no longer pass laws. But they believed it was worth it. They were serving a cause bigger than themselves.

Ex-Fox reporter explains why Tucker Carlson is lying about vaccines

Latest Videos (16 Videos) Toobin: This is what's maddening about the DACA fight. Black man tased after allegedly helping someone evade subway fare. Biden makes plea to those spreading misinformation on Facebook. Jeff Bezos was criticized for his space flight. See what the billionaire had to say. Ex-Fox reporter explains...

Sen. Rand Paul (R-Ky.) is requesting an investigation into allegations by Tucker Carlson that the National Security Agency was spying on him, Axios has learned. Why it matters: The senator sent a letter to Gen. Paul Nakasone of the National Security Agency, casting doubt on the NSA’s public denial of spying on Carlson and defending the Fox News host as a journalist who should be protected by the First Amendment.

How Tucker Carlson became the voice of White grievance

Tucker Carlson huddled in a low-ceilinged dungeon that had served as a holding pen for Africans bound for enslavement in the United States. It was a July day in 2003 in Ghana, and Carlson stood alongside some of America’s most prominent civil rights leaders. The conservative commentator, who at the...

Tucker Carlson On Republicans: ‘They’re Inept And Bad At Governing’

In a new interview with Time, Fox News prime time host Tucker Carlson explained why Republicans had lost power in Washington. “First of all, they’re inept and bad at governing,” Carlson told Time’s Charlotte Alter. “The party is much more effective as an oppositional force than it is as a governing party.”

On Jan. 6, Ashli Babbitt, along with thousands of other supporters of former President Donald Trump, stormed into the U.S. Capitol. She tried to be the first in the mob to climb through broken glass in a door to the Speaker’s Lobby as members of Congress stood nearby. Instead, Babbitt was shot and killed by a U.S. Capitol Police officer.