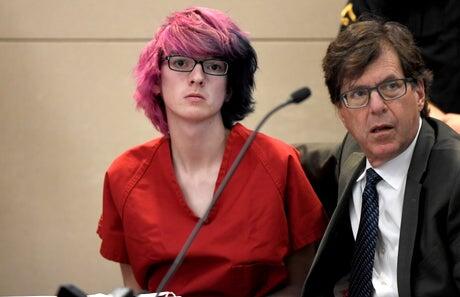 A jury in Colorado convicted Devon Erickson for his role in the deadly 2019 shooting at the STEM School Highlands Ranch that killed one person and injured eight.

Erickson, who was 18 at the time of the shooting, was held guilty for the murder of Kendrick Castillo , the only person to have died during the shooting.

Castillo was the first person to have lunged at Erickson in an effort to disarm him when he entered their classroom with a gun, according to multiple media reports. He was fatally shot and several other students injured, as they rushed to overpower the shooter, reported the Colorado Community Media .

Apart from two counts of murder, the jury found Erickson guilty of over 40 criminal charges, including attempted murder and conspiracy.

His sentence hearing is due on 17 September. Since Erickson was an adult at the time of committing the crime, he faces a mandatory life sentence in prison without parole for his murder conviction.

“We’ve had tears of sorrow. We’ve had anger over a couple of years,” Kendrick’s father, John Castillo was quoted as saying by 9 News. “Today, we have tears of joy. As we heard those read off, for every person, it was a release. It was truly a blessing to hear that justice was served.”

Alec McKinney, another person who was held guilty last year for his role in the school shooting , also testified against Erickson in the court saying that they planned the shooting for weeks before executing it, reported 9 News. They intended to specifically target room 107, said McKinney, who was 16 at the time of the shooting.

The defence counsel for Erickson, David Kaplan, however, alleged during the hearing that his client was “manipulated” by McKinney into joining the shooting. Chief deputy district attorney George Brauchler argued that there was “zero evidence” to suggest coercion.

At the time of the verdict, Erickson, dressed in a suit and tie, was nearly motionless staring ahead and blinking, reported the Associated Press.

LYNWOOD — A 29-year-old Chicago man was killed and two others injured in a shooting early Sunday at The New Corner Bar & Grill at 20600 Torrence Ave., police said. The deceased, who was pronounced dead at Franciscan Health Dyer hospital, was identified Sunday by the Lake County coroner's office as Cornelius L. Washington Jr.

MOBILE, Ala. (WKRG) — A Mobile man was found guilty of shooting the mother of their child as she tried to run from him in her car. The Mobile County District Attorney’s office said Quinterious Williams was found guilty by a jury for shooting the woman as she attempted to flee from him in her car. Their 5-year-old son was also in the car at the time of the shooting. The woman was shot in the back of the head but survived.

Investigators believe the victim was an innocent bystander, trying to step in and stop a domestic situation.

A 20-year-old man has been arrested in connection to the shooting at a Corona movie theater that killed a woman and left her friend on life support, Corona police said. Joseph Jimenez was arrested at 8 p.m. Tuesday, July 27, at a home in the 19000 block of Envoy Avenue, about two miles north of the Regal Edwards cinema. He was booked into Robert Presley Detention Center in Riverside at 4:07 a.m. Wednesday, according to the county jail log.

One dead, two others injured in overnight shooting at Memphis club

If you have information that can help investigators, call CrimeStoppers at 901-528-2274 (CASH). All calls are anonymous, and you could earn a cash reward.

One dead, one injured in shooting at East Knoxville apartment complex

One person is dead and another has been hospitalized after a shooting at an East Knoxville apartment complex on Wednesday evening, according to Knoxville Police Department. Community members at the scene shared how they're tired of the gun violence. WATE Good Morning Tennessee.

DETROIT – A Detroit man has been charged with first-degree murder in connection with a shooting that left two people dead and one injured on the city’s west side. Detroit police were called around 3 a.m. July 16 to a home in the 15000 block of Washburn Street. When they...

ELMENDORF, Texas - The Bexar County Sheriff's Office says a woman was killed during a triple shooting late Tuesday night. The deadly shooting happened around 11:45 p.m. when deputies were called out to South Loop 1604 East near Roddy Road and Highway 181. When deputies arrived on the scene, they...

The two are being held in the Bell County Jail on a $1 million bond each.

The Belton Police Department is investigating a shooting that killed a 39-year old man at the 1100 block of Shady Lane. The suspect in the shooting is still at large, with Belton PD searching the area.

'Terrifying': One dead and two injured after a shooting at a Spokane Valley bar

Two people have been arrested and charged in connection to the shooting.

Major Crimes investigating shooting in Spokane Valley that has left one dead, two others injured

SPOKANE VALLEY, Wash. – Major Crimes detectives are investigating a late-night shooting that left one dead and two others wounded in Spokane Valley. In a joint-release, Spokane Valley Police Department (SVPD) and the Spokane County Sheriff’s Office said a fight escalated into a shooting at Ichabod’s East on Sprague in Spokane Valley. They said calls came in shortly after midnight with little information.

Arrest made in July 4 shooting that left one dead

PEORIA, Ill. — Peoria Police have arrested an 18-year-old in connection with a July 4 shooting that left one dead and three injured. Wednesday, July 28, members of the Peoria Police Department Target Offender Unit and members of the U.S. Marshals Fugitive Task Force arrested Eric Jackson for an outstanding Peoria County warrant.

IRVING, Texas - Irving police are investigating a shooting that left a man dead and another injured Saturday morning morning. The shooting happened just before 8:45 a.m., in the 7500 block of N. MacArthur Boulevard. Responding officers found two men who had been shot during a fight. Both were taken...

Eight people traveling on a party bus were wounded after gunfire erupted shortly before midnight on Wednesday in the Windy City. The incident occurred on the 1600 block of North La Salle around 11:57 p.m. Law enforcement has listed a dark gray Jeep Cherokee and a black Jeep Cherokee as the two suspect vehicles, though it was not specified if there were multiple gunmen involved in the incident, the Chicago Police Department said. All victims were transported to medical facilities for treatment.

CARROLL COUNTY, Ohio — Carroll County Sheriff's Deputy Jacob Baker has been found not guilty of voluntary manslaughter, per our news partners at The Times Reporter. Baker was indicted in a 2019 shooting that left Robert Sikon, 41, dead. It happened following a traffic stop. Sikon was the passenger and...

FAYETTE COUNTY, Tenn. (WMC) - A man charged in a 2020 fatal shooting in Fayette County is facing additional charges. The shooting happened at a party on Brewer Road in August 2020. 19-year-old Tavaris Lewis died at the scene from his injuries and four others were injured. Deandre Rivers was...

HOUSTON — One person is dead and three others were shot Thursday at a bar in northwest Harris County. The shooting happened around 8:40 p.m. in the 9700 block of N. Houston Rosslyn Road. Harris County Precinct 1 Constable Alan Rosen said it was a drive-by shooting. Rosen said the...

One dead and several injured in Prince George’s County shooting

ADELPHI, Md. (WDVM) — The Prince George’s County Police Department responded to the area of the 1800 block of Metzerott Road in Adelphi on Wednesday morning around 12:10 am to reports of a shooting. Officials say five victims suffering from gunshot wounds were located on the scene and one male...

Deerfield-News. com-Deerfield Beach,Fl- An early morning shooting in Deerfield Beach has left one person dead and two others injured. “Around 2 a.m. on Wednesday, July 28, Broward Sheriff’s Office deputies responded to a report of a shooting in the 600 block of Northeast 40th Street in Deerfield Beach. Upon arrival, one male was found with gunshot wounds. Broward Sheriff Fire Rescue transported the man to an area hospital where he was pronounced deceased. Two additional people sustained gunshot wounds and self-transported to area hospitals. BSO’s Homicide and Crime Scene units responded to the scene and are investigating the circumstances surrounding this shooting.”