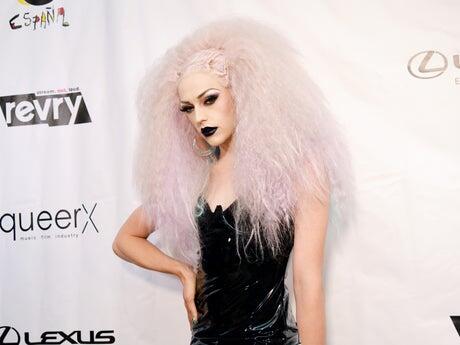 The dancer and cannabis activist, who appeared on the sixth season of the reality TV competition in 2014, is one of the show’s most memorable contestants.

On Tuesday (15 June), Laganja revealed that she has been living as a woman among friends and family for a year, having used drag to publicly ease herself into her identity by “presenting as female for the last 10 years”.

“I do want to be able to express this at all times,” she told Entertainment Weekly . “In one week already, my life has changed. I’m able to come off stage and take my makeup off and still see a beautiful woman in the mirror. It’s powerful.”

Laganja said that she is yet to begin hormone therapy, explaining: “Glam doesn’t make you a woman; it makes you a woman to people outside, in the world... gender is performative, and what we wear is an extension of what we feel on the inside.”

Laganja added that she was inspired by other trans women who had come out, stating: “There are so many other women around me who’ve inspired me to come forward today, and it’s because of their fight and their struggle that I’m able to really do this and say that I’m nervous, but I’m not scared.”

This includes her fellow season six competitor Gia Gunn, who came out as trans in 2017 and later returned to compete on season four of All Stars .

Laganja said that she is thankful that Gunn didn’t “push” her to come out as trans earlier. “Of course she’s encouraged me,” she said. “From day one when we met, she was like, ‘Oh honey, you’re a woman!’ She’s known longer than I have!”

She will continue to perform under the name Laganja and use her birth name, Jay Jackson, among her closest friends so that she does not feel like she’s “turning my back on” her past.

Kanye West has made his modelling debut walking down a mud-lined runway for Balenciaga’s SS23 Paris Fashion Week show.The American rapper, 45, who has legally changed his name to Ye, opened the luxury fashion house’s SS23 on Sunday morning (2 October), dressed in a cumbersome, all-black outfit.Layered up in a bulky security guard-style jacket, leather trousers and baseball cap, over which he pulled a hood, he lumbered his way down the mud-bespattered runway, complete with puddles and slush. Explaining the inspiration for the set ahead of the show, Denma – Balenciaga’s creative director – said the mud was “a...
DESIGNERS & COLLECTIONS・22 MINUTES AGO
BuzzFeed

What Actor Could You Never Look At The Same After Seeing Them In THAT Role?

You know the one.
MOVIES・11 MINUTES AGO
BuzzFeed

The Internet Is High-Key Obsessed With Emma Chamberlain's New House, And Honestly, It's Restored My Faith In Celebrity Homes

Emily Ratajkowski has accused Netflix’s new Marilyn Monroe biopic, Blonde, of “festishising female pain.”The model took to TikTok to vent her apparent frustrations with the recently-released film, saying “we love to fetishise female pain … We obsess over dead girls and serial killers.”Ms Ratajkowski, 31, said she is yet to watch the film, which was adapted from Joyce Carol Oates’s 1999 fictional book about the icon.Planned Parenthood has also criticised the film as “anti-abortion propaganda.”Click here to sign up for our newsletters. Read More Conversations with a Killer: The Jeffrey Dahmer Tapes trailerMiles Teller jokes about Tom Cruise and Top Gun: Maverick on SNLNoah Centineo and Lana Condor’s chemistry read for To All the Boys I’ve Loved Before
MOVIES・2 HOURS AGO
The Independent

Saturday Night Live has left viewers in hysterics with its “perfect” parody of Nicole Kidman’s AMC commercial. In 2021, the US theatre chain AMC, debuted a commerical starring the Oscar winner, which was quickly turned into a meme online. In September earlier this year, a viral post...
CELEBRITIES・2 HOURS AGO
The Independent

Voices: I’m sick to death of Black pain as entertainment. That’s why I loved The Woman King

I was about ten minutes into The Woman King when I posted a note on social media that read: “Pretty sure I know where at least some of my Mom’s ancestors come from.” The depiction of a fierce community of warrior women in 1800s Africa was one that resonated with me in a way that few depictions of Black women in the past really have.My own family tends to be very matriarchal — not unusual for African American households, but mine is perhaps more so than usual. I come from a long line of fierce and intelligent black women on...
TV & VIDEOS・2 DAYS AGO