Chase ends after deputies open fire on 215 Freeway near Menifee 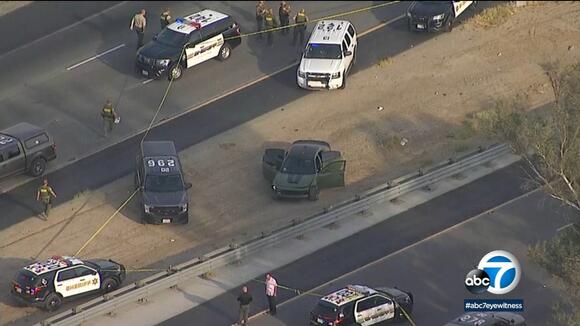 A chase involving the Riverside County Sheriff's Department ended with deputies opening fire on the 215 Freeway near Menifee Tuesday evening, leading authorities to shut down all lanes in the area. The 215 was closed between Ethanac Road and McCall Boulevard, causing a heavy traffic backup for miles in both directions around 6 p.m. By 3 a.m. Wednesday, all lanes were reopened. Details regarding what led to the chase and shooting were not immediately known. AIR7 HD was over the scene as officers from multiple agencies, including the U.S. Border Patrol, swarmed the scene. A handgun was spotted on the pavement as authorities investigated. Traffic in the area was being diverted onto surface streets. It is unknown how long the freeway will remain closed. No deputies or Border Patrol agents were injured in the incident, and it is unclear if a suspect was wounded.

Man shot in leg, person in custody after collision on westbound 60 Freeway in Pomona

One motorist shot another motorist in the leg following a collision on the 60 Freeway in Pomona early Monday, police said.

One Kern County sheriff's deputy was killed and another was wounded Sunday in a shootout at a town north of Bakersfield.

A suspect who was holding an elderly woman at knifepoint at a Mar Vista apartment was killed in an officer-involved shooting, according to LAPD.

Two people were killed in a head-on collision involving a wrong-way driver on the 91 Freeway in Long Beach, authorities said.

2 slashed with broken bottle at quinceañera in Whittier; suspect in custody

A burglary suspect was killed in an officer-involved shooting in Mar Vista, according to LAPD.

The remains of 17-year-old Jack Cantin have been found three years after he went missing when Montecito was hit by a devastating mudslide, according to his mother.

A sandstorm caused a huge 22-vehicle pileup on a Utah highway that left eight people dead, including children, authorities said.

Heavy rain on Monday created slick roads across Southern California and led to dozens of accidents on the region's freeways and streets during the early morning commute.

An alleged kidnapper is back out on the streets just a day after he was allegedly spotted in West Hollywood carrying an unconscious woman to his van and speeding away.

A 30-acre blaze in Jurupa Valley prompted evacuation orders before firefighters were able to gain the upper hand and stop forward progress.

New video shows deputies shooting and wounding a 17-year-old car theft suspect as he reached in his waistband during a confrontation in Highland.

A 19-year-old woman was fatally shot in Riverside and a suspect was in custody, police say.

Police officers from multiple agencies sprang into action to save the life of a woman dangling off the Vincent Thomas Bridge in San Pedro.

Skeletal remains that were discovered in the in the Ballona Wetlands Ecological Reserve last week have been identified as a woman who went missing in December, Los Angeles Police said.

The Orange County Sheriff's Department is investigating the death of a man found in a lake at Mile Square Park in Fountain Valley.

A Bakersfield woman was arrested after leaving a newborn and a 3-year-old in her van on a hot summer day - and nearly running over bystanders who tried to intervene.

Shoplifters walk out of TJ Maxx in Granada Hills with armfuls of stolen merchandise: Bystander video

The family of a murdered woman found bound and gagged in her South Los Angeles home is asking city leaders to introduce a reward.